The video that I’m watching could have been made in the ’80s. It has the corny laugh track common in that era. It has the same precocious-beyond-their-years child — in this case, “Sophie.” When Sophie sneaks into her brother’s bedroom, farts under the bedcovers, and pulls them over his head in a dutch-oven scenario — well, that’s pretty timeless.

But what happens next is less standard sitcom fare. “This,” Sophie yells to the struggling figure under the covers, “is what happens when we burn fossil fuels! Smelly toxic gases get trapped in our atmosphere, warm up the planet, and make us sick! Are you going to vote pro-climate? Now that you’re 18?”

Welcome to the next phase of organizing around climate change: persuading people to talk about it. Specifically: the young people who have the most to lose from it.

At some point over the next 15 weeks, this video will be sent out to thousands of teens, as both a prompt and a challenge. Any teenager who accepts the challenge will go talk to a family member about climate change and then post some kind of proof of the conversation online — a video, an Instagram photo — and they’ll get points. A lot of points. That’s because teen focus groups held by the Alliance For Climate Education (ACE), which developed a curriculum for explaining climate change to teenagers, and NextGen Climate America, which develops policy on climate change, found that teenagers like to see many zeros tacked on to the end of their point counters. Getting 10 points for completing a task is a total letdown! Two thousand points is more like it. The points will be tabulated as part of an elaborate civic organizing tool/social media game called the Get Loud Challenge.

At the end of the 15 weeks, the kids who get the most points will get prizes: college scholarships, a research trip to the Peruvian Amazon. The prizes were focus-grouped, too. “We had things on the list of hypothetical prizes like ‘new Tesla,’” says Leah Qusba, the communications director for ACE. “None of the kids wanted a Tesla. One kid wrote, ‘I would sell the Tesla to pay for college.'” When asked what celebrities they might potentially like to meet should they accumulate enough points, the teenagers compiled a list of YouTube celebrities. They expressed absolutely no interest in Leonardo DiCaprio.

There are two social theory concepts behind Get Loud: conversation and games. In late 2014, a study came out in the journal Nature about how door-to-door canvassers could, in the course of a 22-minute conversation about their own personal experience, actually change a stranger’s position on marriage equality and abortion rights. A few months later, the study was retracted. Actually conducting the study would have been expensive and difficult — so, instead, the grad student in question had chosen the much more affordable option of not doing the study at all while claiming that he had.

Still, even though the study itself was bogus, social scientists continue to believe that there is something there. The gay rights movement has made particularly deft use of conversation campaigns: In 1978, when a California ballot initiative appeared that would have banned any person who was gay (or who hung out with gays) from working in the public school system, San Francisco politician Harvey Milk made the following speech:

Gay brothers and sisters, … You must come out. Come out … to your parents … I know that it is hard and will hurt them but think about how they will hurt you in the voting booth! Come out to your relatives … come out to your friends … if indeed they are your friends. Come out to your neighbors … to your fellow workers … to the people who work where you eat and shop … come out only to the people you know, and who know you. Not to anyone else. But once and for all, break down the myths, destroy the lies and distortions.

The initiative was defeated, and the mobilization of individual people and individual stories toward a larger political goal continued as a thread through the gay rights movement. When the marriage-rights group Minnesotans United for all Families set out to overturn a gay marriage ban in the state, they organized a massive “one-on-one conversation drive” that was credited with the ban’s reversal. A similar conversation campaign in Ireland went by the hashtag #ringyourgranny — and in May 2015, Ireland became the first country in the world to actually vote marriage equality into effect (62.1% yes to 37.9% no). 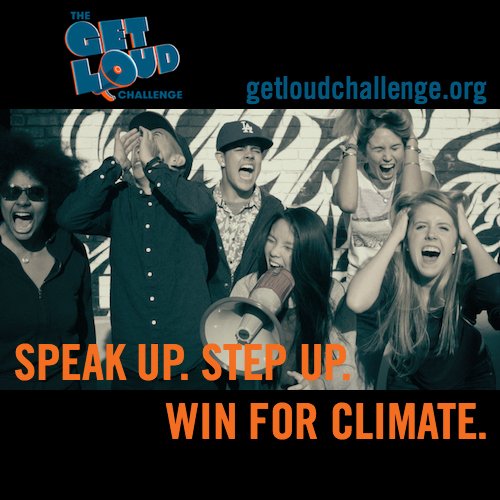 In the early stages of its development, Get Loud was even more heavily focused on conversation. The idea was to prep teenagers to sit down with their parents and have a serious discussion about climate change and what they planned to do about it. Back then, the campaign was called “Have the Talk” — a riff on the awkward sex-ed conversations that teenagers have with their parents.

It made a certain kind of sense — two awkward conversations, with the power dynamic reversed. Then several people pointed out that “Have the Talk” is a phrase that also refers to that awkward “Don’t think you can do the same things your white-looking friends can do, because you might get shot by the cops” talk that parents have with teenagers of color. Also: “Have the Talk” just didn’t sound very fun. It sounded like a dull obligation — the civic equivalent of broccoli.

Which is where the gamification came in. The overlap of politics and online gaming had ungainly beginnings: The first video game ever commissioned by a U.S. political campaign was the “Howard Dean for Iowa Game,” which allowed players to gain points for virtual sign-waving, door-to-door canvassing, and pamphleteering. The game is almost entirely forgotten today — partly because it launched right around Christmas of 2003, partly because it was, well, a game about sign-waving. The quest to gamify politics continued, nonetheless. A 2008 Pew survey reported that kids who played “civic games” (the Sims, basically) were “more likely to report interest and engagement in civic and political activities,” and that “simulations of civic or political activities, helping others, and debating ethical issues … promote civic outcomes among youth.”

These days, gamification is the hot new dance craze — both in political organizing and in regular advertising. There are numerous climate-related games, from the the White House–sponsored Climate Game Jam to the elementary school–oriented Koda Quest, where kids could only move their virtual baby polar bear to the next level of the game once their parents verified that they had, indeed, been recycling and conserving energy in the real world.

But how exactly to turn talking to people about climate change into a game? ACE and NextGen Climate America began working with Social Toaster, an “engagement platform” that has worked on everything from Spiderman 2 (“Spider-Fans spun their web across their social networks to earn points that entered them to win awesome Sony products including PlayStation consoles”) to the United Nations (“The most widely shared stories so far include those centered on Ebola awareness”).

In the spirit of research, I signed up for the Get Loud Challenge. Because I am old (relatively speaking) and paranoid, I did not give Get Loud the access it wanted to my Twitter, Facebook, and Instagram accounts. (Snapchat, the social network most used by actual teenagers, was not included, since messages disappear after being posted, making them impossible for a third party to verify.)

My account-sharing reluctance did not prevent me from visiting a petition “asking President Obama and the EPA to stop the worst methane leak in US history” (2,500 points) or from watching a video about the People’s Climate March (2,500 points).

But I was unable to get credit for suggested tasks like tweeting my support to the pope (also 2,500 points, with the suggested text: Thanks @Pontifex for rallying the world to #ActOnClimate. Youth around the world stand with you. Keep doing what you do. #PopeRocksEntry). Or tweeting to Mark Ruffalo (suggested text: To save the world from #climatechange we need more climate @Avengers like @MarkRuffalo. Thx 4 being a #KickassClimateCeleb. #ClimateThxEntry). Or tweeting to Tom Steyer, the former hedge fund manager who most teenagers have never heard of, but who founded NextGen Climate America (suggested text: Thank you @TomSteyer for being a bold #climateleader. Young people are ready to join in and take the lead on climate! #ClimateThanksEntry).

Was this fun? I’m not a games person. But it might be — if I were competing against a horde of other youths for college money, a research trip to the Peruvian Amazon, or an all-expenses-paid trip to a climate rally in Washington. When I visited the kickoff rally for Get Loud at Abraham Lincoln High School in San Francisco, the audience of teenagers erupted with audible “ooooohs” and “aaahs” when the prizes were announced. Most college-bound teenagers are already in a race against the rest of their cohort to seem like the most civic-minded, politically engaged youth in their graduating class, so this was right up their alley.

As for me: Somehow, just by spending an hour clicking around the Get Loud site, I wound up with 26,000 points. And I found seeing such a huge number at the top of my screen surprisingly gratifying. That high point-values thing? It actually works.