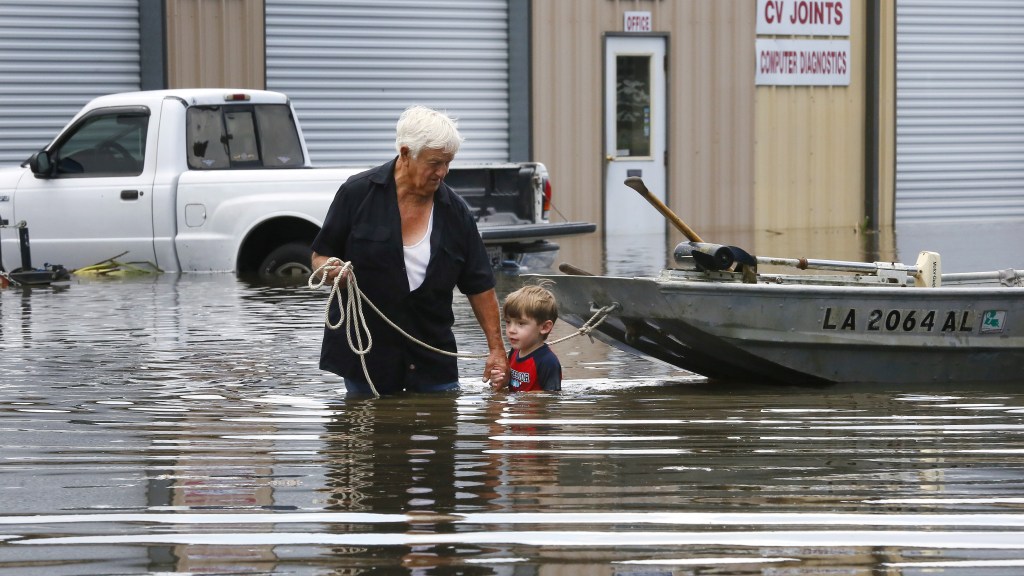 Global warming has dramatically increased the likelihood of type of torrential rainfall that flooded Louisiana last month, according to a new study by government and private sector scientists. Researchers working with the National Oceanic and Atmospheric Administration found that the probability of such storms along the U.S. Gulf Coast had increased by at least 40 percent since 1900 — and may even have doubled — thanks to climate change.

In August, cities and towns in the southern part of Louisiana were submerged after intense rains led to devastating flooding, killing 13 people and damaging around 55,000 homes. Gov. John Bel Edwards (D) estimates the damage will cost more than $8.7 billion. The Red Cross declared it “the worst natural disaster to strike the United States” since Hurricane Sandy in 2012.

On Aug. 11 and 12, Baton Rouge was hit with 11.24 inches of rain. By Aug.14, much of the area was measuring the rain in feet. The storm ultimately dropped 7.1 trillion gallons of water on the state, according to a Capital Weather Gang story*. That’s three times as much rain as Hurricane Katrina brought in 2005.

The researchers found that an event like this can now be expected to occur somewhere on the U.S. Gulf Coast once every 30 years. A century ago, it was expected to occur just once every 50 years. Climate change has also increased the intensity of precipitation in these storms by 10 percent, according to the study.

Karin van der Wiel was the lead author of the study; she’s a research associate at Princeton and works at NOAA. She said the new estimate doesn’t necessarily mean we should expect a massive flood every 30 years, since there are a variety of factors — such as rivers and flood-control infrastructure — that affect flooding. What it does mean, she said, is there is now a 1-in-30 chance that we’ll see rain like this on the Gulf Coast in any given year.

“Climate change has definitely increased the odds of very heavy rainfall along the central U.S. Gulf Coast,” she said.

Van der Wiel worked with a team that included Climate Central and the Royal Netherlands Meteorological Institute, using already established research methods to quickly evaluate the Louisiana situation. The study has not yet been peer reviewed, but the journal Hydrology and Earth System Sciences has accepted the paper. The Associated Press reported that several experts who weren’t involved in the study praised the researchers’ efforts.

This is just the latest disaster that seems to have been intensified by climate change. In California this year, more 5,350 wildfires have burned nearly 500,000 acres, as warmer temperatures have left the state full of potential kindling. Meanwhile, sea level rise has worsened the impact of tropical storms like Hurricane Sandy.