Today, I learned I am running for Veep 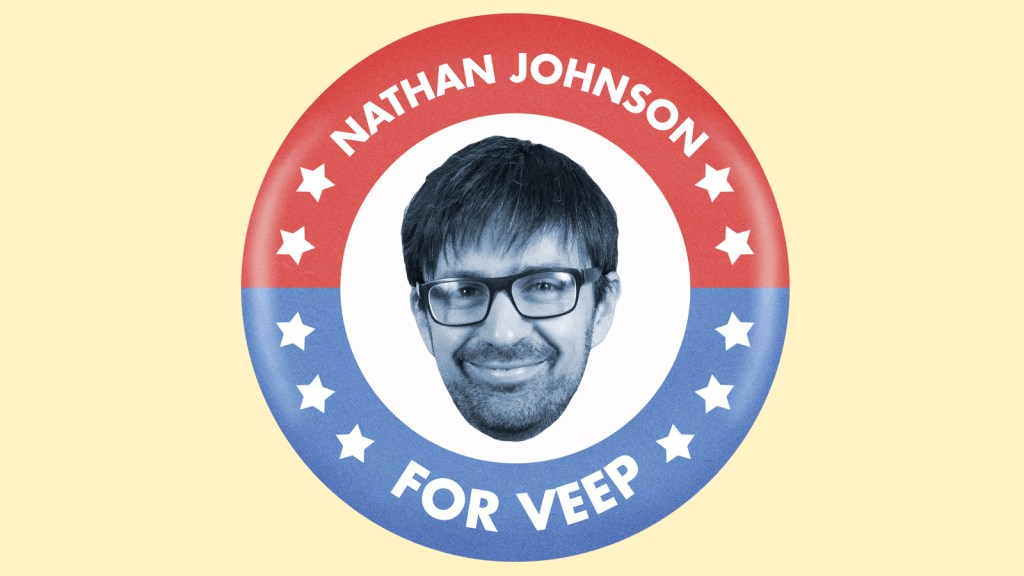 Today, I learned I am running for Veep

I recently learned that I have been selected to run for vice president. Or not. Conservative independent presidential candidate Evan McMullin has written in “Nathan Johnson” as his running mate, which will appear on the ballot in as many as nine states. I can neither confirm nor deny that this is me.

I knew this would happen. Every time I’m not selected for VP, the Genius Grant, or the Nobel Peace Prize, I’ve thought: Sooner or later the people are bound to realize that what they need is a nondescript American everyman — someone totally unremarkable and undistinguished. A Nathan Johnson. At last my time has come.

Some might note that my name is the weirdly spelled Nathanael, and that I’ve never actually gone by Nathan. These are ridiculous quibbles. Look: People sometimes call me Nathan and I don’t correct them, and that fact alone makes me more qualified for higher office than at least one presidential candidate.

If called to serve my country, I won’t spend my time wistfully gazing out the window. The world may be unprepared for a white male politician, but I intend to totally shake things up. I will use my bully pulpit to end America’s dumb fascination with superfoods — except for moringa, of course. A moringa in every pot!

In my first 100 days, I intend to make cover crops compulsory, time all stoplights for bike travel, put taco trucks on every corner, and make the pigeon our national bird. Bald eagles are for the 1% — pigeons though, no matter how downtrodden and dumpster-scented, no matter how many people try to get rid of them, they just keep on keepin’ on. They are a poignant symbol of American tenacity, of nature and civilization thriving together, and of freegans everywhere. Or something like that. An expired Trader Joe’s pizza in every pot, too!

Gosh, if I think too hard about this stuff, I start to doubt myself. I suppose I should do something that matters too, like ending poverty and building a more exciting and sustainable world for the next generation. Maybe I should make pragmatic food policy suggestions for the presidential race, like these. But that’s the sort of thing that leaders would only consider in a rational meritocracy — not this glorious new world where random vice presidents are picked out of a hat.