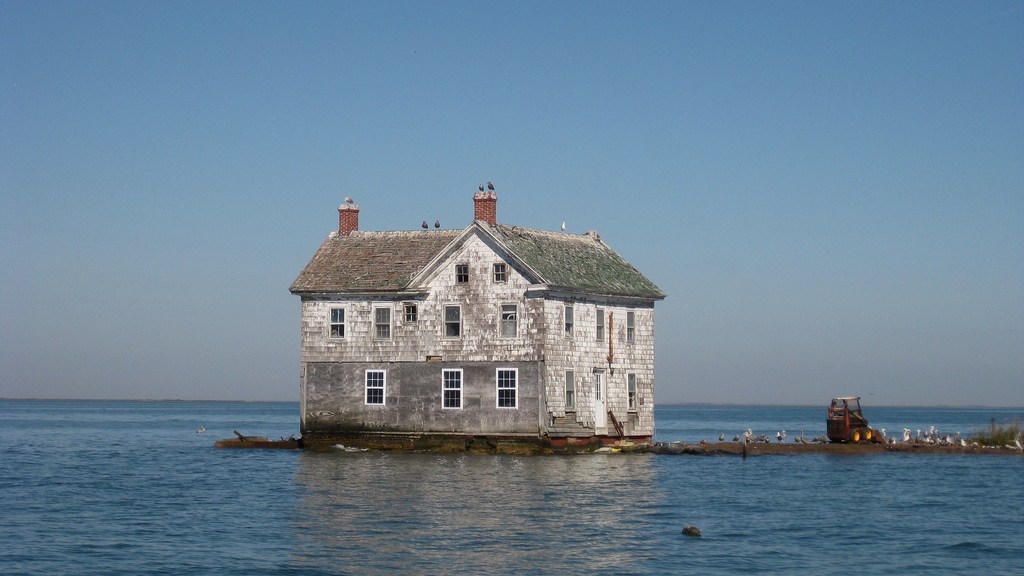 The historic island off the coast of Virginia has been inhabited for thousands of years, well before the British colonized the area in the 17th century. The Pocomoke Indians lived there before the English came, and today the land is home to a population of under 500, many with the same surnames as early colonizers. As the Guardian notes, the island still feels rooted in the old world: Cell service is unreliable. You can’t buy alcohol. Most of the buildings were constructed before WWII. Besides the tourists who visit Tangier’s beaches from passing cruises, its only industry is fishing and crabbing — the islanders make their living from the sea.

But as the sea level rises, Tangier Island is, quite literally, losing ground.

According to a new report from the Army Corps of Engineers, the three-mile-long island has lost over 65 percent of its landmass since 1850. And if this continues at the same rate, the island will be uninhabitable in 50 years.

The western portion of the island is crumbling into the sea like a wet cake. Around 14 feet a year is lost to the sea. The eastern half is being eaten away too, albeit at a slower rate. The creeks that twist their way throughout the island are set to swell and break up the island into fragments, engineers warn.

“The islands are shrinking and unless corrective action is taken they will be lost,” said David Schulte, author of the report. “The whole island won’t be underwater but it will turn into marshland. Tangier is only 1.2 meters above sea level now so a moderately severe sea-level rise will put them in extreme jeopardy of storms and flooding.

“Even under a low sea-level rise they will have about a century. So far they’ve been pretty lucky with storms. They were spared the brunt of Hurricane Sandy. I don’t think it would’ve recovered from that. We’ll have to keep our fingers crossed on that score.”

Finger crossing is probably not enough. Even though Tangier Island is just 90 miles from Washington, D.C., our leaders there seem happy to ignore it. As President Obama and the rest of the world work on a climate change plan in Paris, Republicans in D.C. continue to deny climate change’s very existence. The Army Corps of Engineers estimates it would take two years and between $20 million and $30 million to protect the island using a system of seawalls, dunes, and other infrastructure, as well as improving wetlands.

“Hopefully Congress will look at this report and decide that this island is worth saving,” Schulte told the Guardian. “A lot of people think sea-level rise is something a long way off, but this is affecting people now.”