Could we fight climate change with bitcoin? This guys thinks so 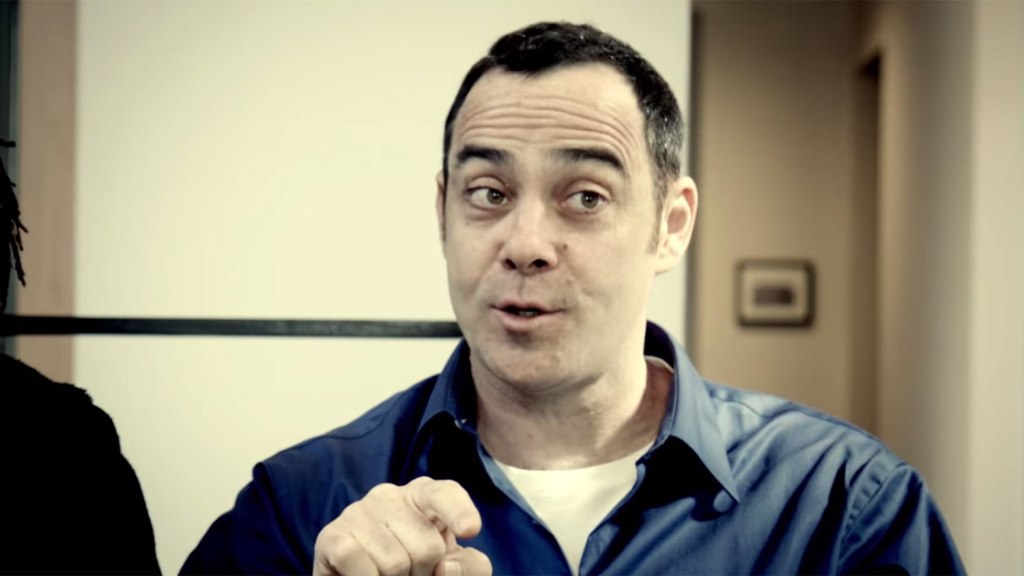 Could we fight climate change with bitcoin? This guys thinks so

James D’Angelo wants to cap the world’s carbon emissions, and he wants to do it using bitcoin — that digital currency you’ve heard about but don’t quite understand.

The NASA engineer turned rapper turned conservationist turned cryptocurrency enthusiast turned YouTube personality calls his plan “the people’s cap-and-trade,” or Sno-Caps. It would give everyone in the world equal access to the carbon market, have almost no operating costs, and require zero government involvement.

I called up D’Angelo last month in Brookline, Mass., where he lives with his wife and 3-year-old son. He was eager to tell me about Sno-Caps, but first, I said, I wanted to discuss his résumé. It was “interesting,” I told him. D’Angelo laughed and said interesting was a nice way to describe it — one his mother probably wouldn’t use.

He assured me that there was some method to the madness — behind every seemingly random twist in his career path was either a fascination with technology, passion for the environment, desire to fix broken political systems, or some combination of the three.

D’Angelo started working at NASA’s Goddard Space Flight Center in Maryland in 1988, while earning a master’s degree in computer science and electrical engineering from MIT. The work was engaging, he said, and the people were great, but he just couldn’t sit through any more doughnut-fueled 7 a.m. meetings.

“As a 24-year-old who liked music and going out, it was tough,” he said. Plus, he’d always been an excitable guy and was ready to try something new.

So, naturally, D’Angelo moved to Philadelphia, pretended to be an experienced music producer, and used his technical know-how to loop and sample his way into the rap industry. One thing led to another, and he became Oatie Kato, front man of The Goats, an early-’90s rap trio known for its politically charged lyrics. Here’s some “lost footage” remixed by Oatie himself back in 2013 (D’Angelo is the one in the white t-shirt, using a hammer as a microphone). Enjoy:

Over the years, D’Angelo also dabbled in the movie biz and did wildlife conservation work in Kenya, Bolivia, and Gabon. He first heard about bitcoin in 2012, when he was doing volunteer research for a liberal Austrian economist (because of course he was). The guy studied local currencies and hated bitcoin, D’Angelo recalled.

“I just kept hearing how bad this new thing was, but I had to research it, and I didn’t hate it,” D’Angelo said with a laugh. “So I got pretty excited about it and started reading more and more.”

Fast-forward to the present. D’Angelo now works as a cryptography and finance consultant. He also hosts the World Bitcoin Network channel on YouTube, where he explains bitcoin basics and gushes about all the ways we could use the technology.

Last year, D’Angelo released this 40-minute explainer video introducing the bitcoin-based “people’s cap-and-trade” plan. He named it Sno-Caps for its association with the cold and because D’Angelo used to really like snow cones (this guy!):

Here’s the gist: Starting at birth, every person on earth would be entitled to an equal share of carbon emissions each year. The size of that share would depend on a global emissions cap coded into the Sno-Caps software.

To claim their shares, people would just have to open up bitcoin accounts and register with D’Angelo’s system. Then, throughout their lives, they’d be free to lease out their carbon shares to big emitters in exchange for money, all of which would happen via the bitcoin network. And because everyone would be leasing, rather than selling, there’d be no risk of someone buying up the market, and people could always cancel their leases with companies that misbehave.

Now, in a perfect world, D’Angelo would launch Sno-Caps, recruit a small cohort of early adopters, do some serious publicity, and then the network would go through a Facebook-like explosion, resulting in a people-run, government-free global cap-and-trade system.

In reality, D’Angelo has to iron out a few kinks before launching, and even then, the odds of Sno-Caps taking off like Facebook are slim — like, insanely slim.

That said, the idea behind Sno-Caps — that citizens of the world could band together and start their own cap-and-trade system, collectively flipping off their stagnated governments in the process — is just too juicy to pass up. So let’s dive in and take a look.

“Anyone dealing with bitcoin really has to throw away their brain and start from scratch,” D’Angelo told me. “I’ve thought about it a good portion of each week for three years and have to say, I don’t get it all, and I’m learning new stuff each day.”

First introduced in 2009 by an unknown inventor who goes by the pseudonym Satoshi Nakamoto, bitcoin isn’t just a digital currency. Digital currencies have been around since the ’90s, starting with E-Gold back in 1996, so that’s nothing new. The true innovation behind bitcoin — and the reason people are so geeked about it — is the way the system keeps track of transactions.

For a detailed explanation of how the technology works, check out this beginner’s guide. Otherwise, if you don’t have time to fall down the rabbit hole, here’s the abbreviated version of why — in D’Angelo’s opinion — bitcoin is the perfect platform for a worldwide cap-and-trade system:

Every exchange of bitcoin is recorded on “the blockchain,” a transparent, online public ledger that people can use for free to conduct peer-to-peer transactions without third-party brokers (or their damn fees). No central authority owns or controls the system, and every transaction is linked to every other transaction on the blockchain, so if someone tries to erase or change a transaction, his or her shenanigans will ripple through the entire system, visible to everyone.

“We’re talking about something that’s fundamentally different from any way of reporting information that we’ve ever known — a permanent and immutable and public database,” D’Angelo said. Which is why he wants to use it to track the world’s carbon emissions.

How would Sno-Caps work?

With Sno-Caps, anyone in the world — you, your mom, an African farmer, Cher — could lease out their annual shares of carbon emissions directly to corporations in exchange for money. The transactions would all happen via “smart” contracts on the bitcoin network, where everyone would be able to see who’s entitled to what emissions.

If the government tried to run a free-market system like this, it would be a “trillion dollar bureaucratic nightmare,” D’Angelo wrote in this white paper about the idea. Plus, he wrote, with government-run cap-and-trade programs, all the action happens on a “trapeze” above voters’ heads. The people’s cap-and-trade, he argues, would engage citizens and incentivize the masses. It would also hold big emitters accountable for their actions, give regular people an easy way to make a profit, save the environment, prove that unicorns exist, and bring Robin Williams back to life.

OK — you’ve already thought of a few dozen reasons why this couldn’t work, right? How would you get the poorest people in the developing world signed up? How would you make sure no one user can claim multiple shares through multiple accounts? How would you get corporations on board when there’s not much in it for them?

D’Angelo addresses many of these potential hurdles in his white paper (spoiler alert: none of them have perfect solutions, yet). For example: To attract corporations, he suggests first appealing to eco-conscious companies that might want to make a statement — he’s looking at you, Whole Foods. Then, as the network grows and gains legitimacy, he expects other companies to join in.

Of course, none of this will ever work if there’s no way to punish corporations and people for emitting more carbon than they’re allotted. This is where a governing body would come in handy, and D’Angelo acknowledges that if Sno-Caps proves workable, it might actually be good thing for governments to back it as official policy (it’s much easier for them to do that than try to build something from scratch, he said).

Otherwise, D’Angelo said, Sno-Caps would rely on “regulation by reputation” — the same kind of system that keeps people well-behaved when they use services like Uber, Airbnb, and eBay.

People would act as watchdogs, calling out companies for emitting more than they’ve leased. And they’d –in theory — be motivated to do this because they’ve got skin in the game. The effectiveness of this system would, of course, depend on a) people knowing how much companies are actually emitting and b) bad actors caring when people call them out. Such a regulatory system would be shoddy at first, D’Angelo explained, but would ideally scale with the network.

“My guess is the feedback loop will go after really big companies first, and individuals will be forgiven,” he said, “but I could see it turning. Americans are going to have to pay up, right?”

Sno-Caps already has a fan base

Last year, D’Angelo entered Sno-Caps into the U.S. Carbon Price competition run by the MIT Climate CoLab, an online crowdsourcing platform that invites anyone around the world to propose solutions to the many problems we now face thanks to climate change. It tied for the Judges’ Choice award.

The win was a nice credibility boost for D’Angelo, a non-academic who uses YouTube as his publishing platform. “It’s tough being an outsider. People are snobby, and I still feel it every day,” he said.

Tom Malone, director of the CoLab and a professor in MIT’s Sloan School of Management, said that getting “wild ideas from unexpected places” is part of what the CoLab is all about.

He said he was an especially big fan of Sno-Caps because it skirted government involvement.

“That in part helps make this feasible in a way that the conventional solutions people are talking about [are not],” he said. “It certainly seems that getting agreement of large national governments to deal in significant ways with climate change is not an easy process.”

Malone and others at the CoLab were so intrigued, in fact, that they’re considering hosting a special competition just for ideas that involve digital currencies in the hopes of attracting more non-government solutions. And in April, the MIT Media Lab announced a new digital currencies initiative led by Brian Forde, former White House senior advisor for mobile and data innovation.

As for D’Angelo, his plan is to raise some money, hire a small team of software engineers, and get this thing launched. Success is a long shot, and D’Angelo knows that, but if there’s a chance it could take off, he figures, why not give it a try?

“Everyone pre-supposed that the solution to climate change is going to come from politics,” D’Angelo said. “I think that’s almost always the worst answer. … You can do really magical stuff with technology.”