On a recent afternoon, visitors packed into Blue Mountain Brewery, one of three craft breweries in Virginia’s idyllic Rockfish Valley. Couples and families spilled out of the restaurant onto patios and into gardens, sipping Full Nelson Pale Ale, Kölsch 151, Original Nitro Porter, and more.

Above them, the low-hanging clouds that obscured Afton Mountain’s upper ridges couldn’t mute the bright reds, oranges, and yellows exploding on its slopes. The brewery is just four miles below Rockfish Gap — the mountain pass that marks the southern entrance of Shenandoah National Park, the passage of the Appalachian Trail, and the point where Skyline Drive becomes the Blue Ridge Parkway.

But there’s a storm brewing in this autumnal paradise, as evidenced by a sign in front of the brewery that’s become quite common in the Blue Ridge Mountains of late: “No pipeline.”

Blue Mountain joins others in the craft beer sector nationwide that are speaking out for their most important ingredient: clean water. The Natural Resources Defense Council’s “Brewers for Clean Water” campaign has lined up 60 breweries, including craft beer heavyweights like Sierra Nevada Brewing Co. and New Belgium Brewing Co., to support and lobby on water quality issues.

“Great breweries grow up around good water sources,” says Taylor Smack, Blue Mountain’s co-owner and head brewer. “Trace minerals in the water affect the chemistry of the mash, the flavor of the beer, how hops are received, the softness and roundness of the beer. We develop our beers around the water source.”

Many breweries are reluctant to get involved in politics for risk of alienating customers, however. That’s the case not just with the NRDC’s campaign, but also with the coastal pipeline proposal that’s won the endorsement of a host of localities and three state governors. 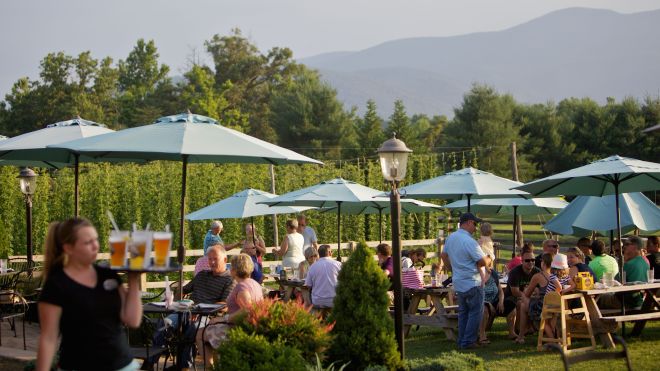 Taylor Smack and his wife, Mandi, founded Blue Mountain Brewery in Rockfish Valley in 2007, after stints interning in Charlottesville, attending brewing school in Chicago, and managing Goose Island’s brewpubs. Five years later, they opened an additional production facility just down the road. They expect to brew about 10,000 barrels of beer this year.

The story is a familiar one in the brewing world. Craft brewers have staked a growing claim of volume in the industry, from 4.4 percent in 2009 to 7.8 percent in 2013, according to the Brewers Association.

There are now more than 60 craft breweries in the Virgina alone, and there are more on the way. Just this month, San Diego’s Stone Brewing Company announced it would build an East Coast facility in Richmond, and the same city’s Green Flash Brewing Company broke ground on a facility in Virginia Beach.

Now, Smack worries that all this growth could be compromised, thanks to a natural gas drilling boom and construction of interstate pipelines to move it to East Coast population centers.

Smack lays out some of the concerns: “It’s a 42-inch pipeline, which is huge, pressurized to 1,000 PSI,” Smack says. “From a guy that deals with pressure on a daily basis, that’s scary. It runs over sinkholes, over fault lines — we’ve had three earthquakes since we’ve been here.”

He’s also upset with the potential for use of eminent domain to force the line through private property against the wishes of landowners. He’s worried that visitors will be put off by damage to the surrounding mountain views.

“I understand they’re going to blaze a mohawk, 75 feet wide, right through our viewshed,” Smack says. 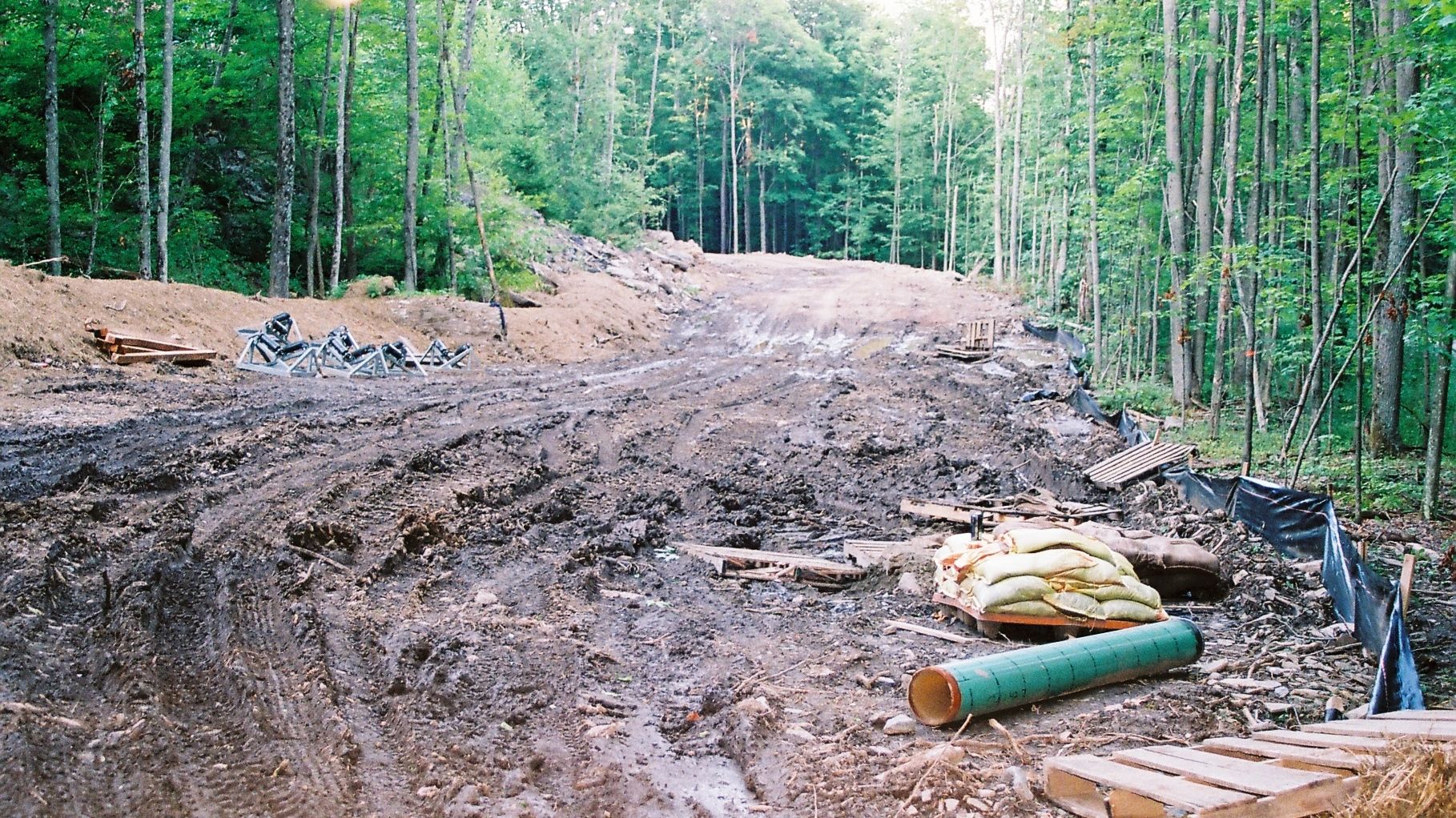 But the politics get complicated.

For example, a recent proposal from the Environmental Protection agency has split the industry. The Waters of the United States rule would clarify the Clean Water Act to give the agency regulatory authority over an additional 2 million miles of stream and 20 million acres of wetlands. The Brewers for Clean Water alliance, and many independent brewers, support the proposal. But the Hill reported in September that farmers who grow their ingredients oppose it.

If there’s division within the industry over the new water rule, there’s near silence when it comes to the question of natural gas.

The Atlantic Coast pipeline proposal, put forward by four energy companies who operate in different territories along the route, is part of a larger effort to develop East Coast infrastructure to move gas out of the Marcellus shale field. Hydraulic fracturing technology, or fracking, has opened the geological feature to mining, growing production from 2 billion cubic feet per day in 2010 to roughly 15 billion cubic feet per day today, according to the U.S. Energy Information Administration. It now accounts for roughly 40 percent of U.S. shale gas production.

“The gas is there. What’s not there are pipelines to get it from where it is to where it’s needed,” says Jim Norvelle, communications director for Dominion, one of the four Atlantic Coast pipeline partners.

Norvelle dismissed Smack’s concerns about the pipeline’s potential impact on water quality. Crossing running water, he says, “is the most regulated activity that we will have to do on the pipeline. We will have federal, state, and local regulators involved every time we want to cross a river or stream or anytime we come anywhere near a well. It’s not done haphazardly; it is done under great regulatory scrutiny.”

A second pipeline through Virginia, called the Mountain Valley Pipeline, has been proposed by a different set of partners for a more southwestern route that also would transport natural gas to North Carolina. It too has met opposition from local residents.

The pipeline proposals come at a time when EPA regulations on mercury and greenhouse gas emissions are pushing power companies away from coal-burning plants to those that run on natural gas. Dominion Virginia Power, for example, is shuttering two Virginia plants powered by coal, “so we’ve got to find the megawatts to take their place,” Norvelle says.

The so-called “War on Coal” still drives votes in the Appalachian coalfields of southwest Virginia and West Virginia, but the market has dictated the shift to natural gas as much as EPA regulations. Although the debate over fracking continues, natural gas burns cleaner than coal, making it a viable “bridge fuel” to a renewable future in the eyes of many — including President Obama and EPA Administrator Gina McCarthy.

The specter of mountaintop removal in Appalachia, paired with a series of oil train derailments across the country, has only boosted natural gas’ reputation as the best of all viable alternatives at the moment. 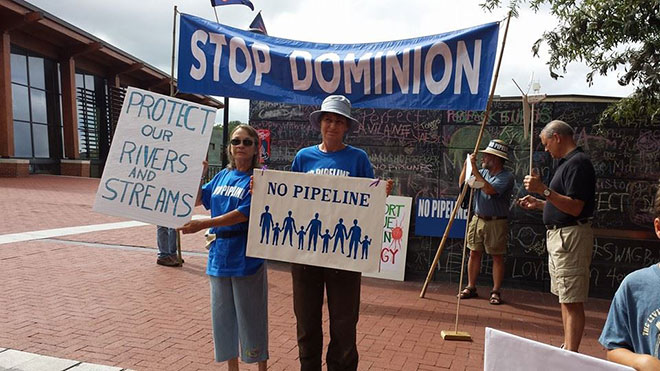 So while Blue Mountain Brewery is allying itself with anti-pipeline activists, its larger, higher profile neighbor, Devils Backbone Brewing Co., has remained on the sidelines.

Devils Backbone currently brews about four times as much beer as Blue Mountain. And with a developing reputation as the darling of the Great American Beer Festival every year since 2009 — the brewery won five medals this year, including Mid-Size Brewing Company of the Year and a gold for German-style Schwarzbier — it’s set to ramp up production even more.

Devils Backbone founder and CEO Steve Crandal, a self-described “conservative tree-hugger,” has implemented water protection measures on his farm, such as planting trees in riparian zones and adding water troughs to keep his livestock off streams. Additionally, Devils Backbone dedicates a dollar per case of its Striped Bass Pale Ale to the Chesapeake Bay Foundation.

Crandall, however, has been more cautious about taking on the Atlantic Coast pipeline. That’s partly due to his feeling that natural gas offers a smaller carbon footprint than many other energy sources, and partly due to the fact it’s used in Devils Backbone’s larger production brewery, located to the southwest in Rockbridge County. (Its smaller brewpub in Nelson County uses propane instead.)

“We all use steam to boil water for our beer, and we use steam to clean our tanks,” Crandall says. “That’s all done through a gas boiler. You’re either going to use natural gas or you’re going to use propane to do that. Natural gas is a much preferable option to propane. It costs less and has less of a carbon footprint.”

Crandall does see a potential 75-foot blaze over the mountains as a “blight on the county,” and says he doesn’t understand why the pipeline can’t run alongside previously used rights of way, such as Interstate 64 or electric transmission lines.

“I hate the idea my neighbors are being forced to swallow this project,” says Crandall. “The other side of the equation is, we use a lot of gas — we use it to make our beer.”

And from a big-picture energy perspective, Crandall understands the impetus for the Atlantic Coast pipeline. “Gas is not perfect by any means — you’ve got to frack for it, and methane does escape — but it burns cleaner than just about anything else we’ve got,” he says. 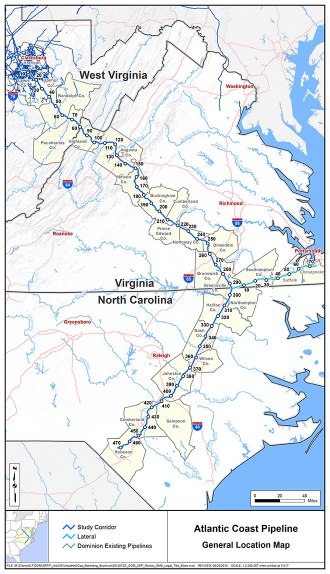 The four energy companies collaborating on the Atlantic Coast pipeline are set to make a pre-filing to the Federal Energy Regulatory Commission this fall, followed by a formal application next summer. If approved, the pipeline could be up and running by late 2018.

Blue Mountain Brewery has jumped into the fight against the current route, agreeing to host meetings of the Friends of Nelson, a local group formed around opposition to the Atlantic Coast pipeline. To the north, in Cooperstown, New York, Brewery Ommegang has likewise taken a vocal stance against fracking.

At this point, though, those breweries still tend to be outliers. Karen Hobbs, a senior policy analyst with NRDC who heads up the “Brewers for Clean Water” campaign, says it’s not unimaginable that others may eventually join them, however.

“We want to take on issues important to our brewers,” Hobbs says. “We want a true partnership with them so we can engage on issues they’re concerned about that affect their breweries. If one of those is fracking, we’ll have that conversation — but we haven’t had it yet about fracking except with a couple of brewers.”