A new study just published in the journal Nature Climate Change reached an interesting, if not totally surprising, conclusion: The Earth has become significantly greener over the past 33 years.

The main reason? All the extra carbon dioxide we humans dump into the air.

Let me be clear right away: This is a kinda sorta good thing, but don’t celebrate the positive aspect of climate change just yet. The effect almost certainly won’t last, and this small positive is completely buried under a long, long list of negatives.

The research used satellites to examine vegetation growth over time, assuming that the extra green is coming from leaves on plants and trees. Using a computer model to estimate leaf growth, they find the extra greening is equivalent to adding about 18 million square kilometers of vegetated land to the globe, more than twice the area of the mainland U.S. That’s pretty astonishing. 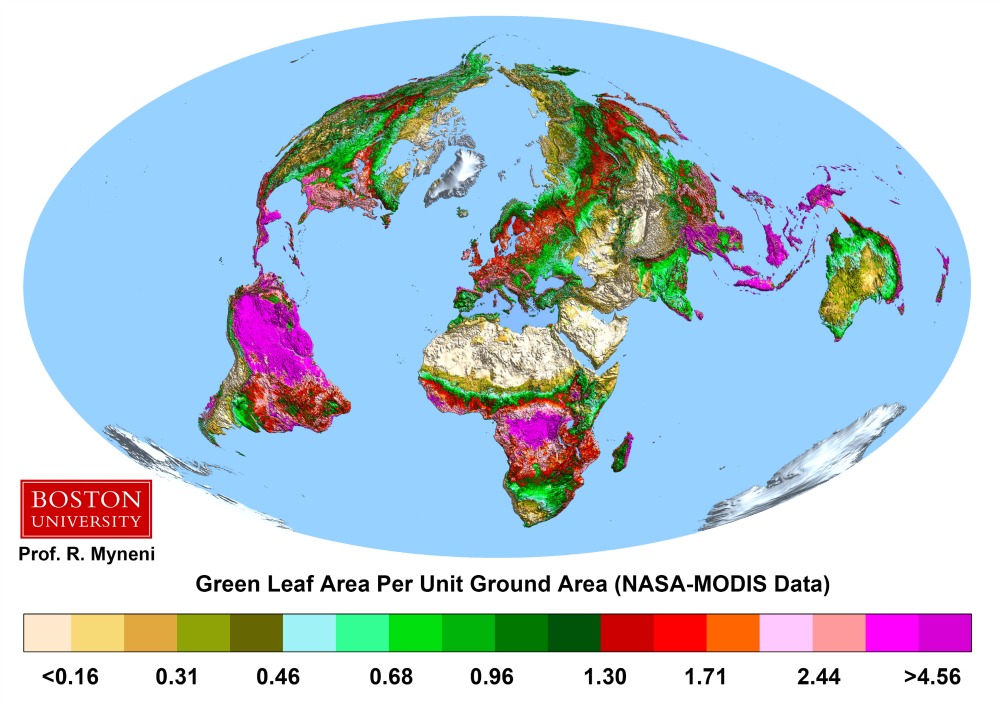 The growth is due to added CO2 in the air. Plants use sunlight for energy and convert CO2 (plus water) into sugar, which is stored for food. In a naive sense, more CO2 means more food for plants (this is called carbon dioxide fertilization), so there’s more growth.

The good news, such as it is, is that this means plants are able to soak up more carbon from the atmosphere. The bad news is, it’s not nearly enough. This is made clear by a graph showing atmospheric carbon dioxide content, as measured at the Mauna Loa Observatory in Hawaii: 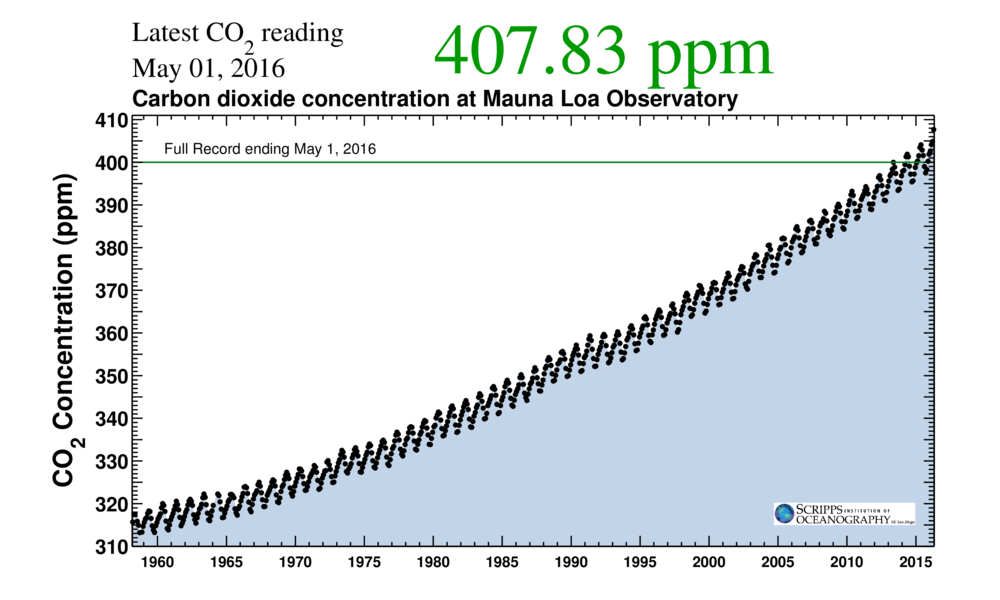 As you can see, the amount of CO2 in the air is still increasing, even with this extra vegetation. Worse, look at the increase from 1980 (roughly the start of the new study’s time range) to 1995. If you extend that slope, you’ll see that the increase has increased since 1995; in other words, we’re putting out even more CO2 per year than we did 35 years ago.

All that extra plant growth can’t keep up with the 40 billion tons of carbon dioxide humans dump into the atmosphere every year.

Incidentally, some of that greening is in the Arctic. That place is usually covered with snow and ice, except warmer temperatures have been causing it to melt away. That’s not a place we want to see green. White would be way better.

Of course, this hasn’t stopped the deniers, who tend to ignore inconvenient facts like that, and instead just tout how the Earth getting greener must be a good thing. World News Daily and the Cato Institute were two sources I found pretty easily making this fallacious claim. It’s cherry-picking in the worst sort of way, but then deniers have been making this ridiculous claim for a long time now.

What I find funny is that in the press release, one of the authors of the research preemptively smacks down the deniers [emphasis mine]:

The beneficial aspect of CO2 fertilization in promoting plant growth has been used by contrarians, notably Lord Ridley (hereditary peer in the U.K. House of Lords) and Mr. Rupert Murdoch (owner of several news outlets), to argue against cuts in carbon emissions to mitigate climate change, similar to those agreed at the 21st Conference of Parties (COP) meeting in Paris last year under the U.N. Framework on Climate Change (UNFCCC). “The fallacy of the contrarian argument is two-fold. First, the many negative aspects of climate change, namely global warming, rising sea levels, melting glaciers and sea ice, more severe tropical storms, etc. are not acknowledged. Second, studies have shown that plants acclimatize, or adjust, to rising CO2 concentration and the fertilization effect diminishes over time,” says coauthor Dr. Philippe Ciais, associate director of the Laboratory of Climate and Environmental Sciences, Gif-suvYvette, France, and contributing lead author of the Carbon Chapter for the recent IPCC Assessment Report 5.

Of course, deniers gonna deny. Using this study to say that climate change is good is like getting in a massive car accident and being happy you don’t have to vacuum out the car anymore.

But hey, if you’re willing to ignore rising sea levels, more extreme weather, melting polar ice, deoxygenation of the oceans, droughts, floods, acidification of the oceans and coral bleaching, more heatwaves, and the displacement of potentially hundreds of millions of people, then y’know, a little more green in your life is just great!

Enjoy it while it lasts.