"Economic resistance" -- a.k.a. divestment -- is as American as apple pie 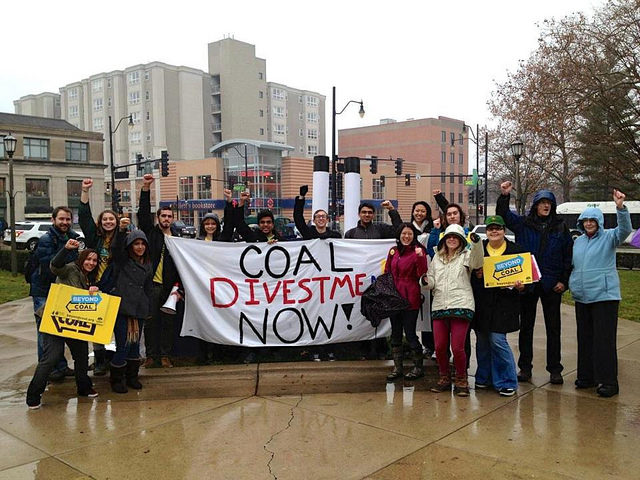 “Economic resistance” — a.k.a. divestment — is as American as apple pie

Bob Massie has been, at various points of his life, a historian, an anti-apartheid activist, a climate-change activist, an Episcopal priest, a money guy, an environmentalist, and various combinations of all of the above. He specializes in linking together the world of finance with the world of environmental and social ideals. For years, Massie was the executive director of Ceres; he’s now the CEO and president of the New Economy Institute.

Massie became involved in the movement to divest from apartheid South Africa as an undergraduate in the ’70s. He later went on to write a very long history of the movement, titled Loosing the Bonds: The United States and South Africa in the Apartheid Years. I talked with him about divestment, then and now; the movement’s roots in revolutionary America; how colleges try to wait out protests; the carbon bubble that’s about to pop; and more.

Q. In Loosing the Bonds, you describe divestment as a very American institution, because of America’s history. What history are you talking about?

A. There are distinctively American things about boycotts and investment questions, going back to before the American Revolution.

George Washington, for example, was deeply frustrated with how, when most Americans wanted to buy something, they had to buy it in London. They would send their crops — usually tobacco — there, and then a broker in London would buy what they wanted for them — clothes, a violin — and send it back.

Somehow every time this happened, they lost money. And so Washington, long before he became president, became a part of a movement to boycott English goods. Wearing clothes that were “homespun” — or made in America — was considered a patriotic act [PDF].

Similarly the Tea Party occurred because the British were defending the Dutch East Indian Company. It was a defense against a corporate act. And the Stamp Act of 1765.  Economic resistance to unwanted corporate behavior is actually essential to American history.

Q. You began working in divestment as a student at Princeton. How is being a student activist different from being an adult one?

A. When people don’t agree with you and want you to go away, they try to mystify you. It is an incredible education. But it is very unfair.

People use the term “fiduciary duty” when they’re talking to you like it’s a Harry Potter paralyzing spell. But once you know what fiduciary duty is, you’ll know that it’s the beginning of the discussion, not the end of one.

The bureaucrats in the administration will primarily try to wait you out. “All these annoying people will graduate.” Which is the hard thing about campus organizing: There’s very little continuity from year to year.

The movement came and went in waves. 1976-1978 were big years: The Soweto riots. The death of Steven Biko. The students made a big fuss, and then …

The thing that you have to understand is that there was a huge difference between now and then. If you wanted to get in touch with someone at another school, what would you do? Call them? Just getting a meeting together was hell. There was no internet. No one could even imagine something like it.

Today, we have so much shared wisdom. Shared tactics. The fact that this divestment movement has gone from zero to 340 schools in 10 months is amazing.

Q. You’re an Episcopal priest, too. What about organizing divestment in churches?

A. People who run churches don’t know money. Usually they hire a banker to manage it who is very conservative. I was a member of a young, dynamic church with a $9 million endowment, but it was managed by white-shoed Wall Street lawyers, and their attitude is, “I’m going to make as much money as possible to keep this church going.”

Q. So how do you talk to the white-shoe guys?

A. If someone knows finance they know: There are two ways to invest in companies, if you are going to buy stock. You can buy stock in an index fund, but that is not in fact how most of Wall Street works. They actively look for the best companies and the worst companies. That’s disinvestment, and it’s absolutely routine. There are already dozens of funds that are doing well without fossil fuel stocks.

We’ve been through the tech bubble, the housing bubble, and now the carbon bubble. It could hardly be more damaging from a long-term perspective. Climate change is going to get worse. Our current energy strategy is financially crazy. We have 10 times more carbon in our reserves than we can burn. It is dawning on companies and potential investors. There are two things going on simultaneously. There is this theory that everything worth knowing is already known and priced into the market. And then there’s the idea that a new thing can come in and change what a market is about. And that happens, over and over again.

The problem is that there is a core of the investment world that is so self-satisfied that they often choose to ignore what is happening on the edges. But the people on the margins, who are spotting the problem are often right. Climate change is embedded in every portfolio.

Q. I’ve heard that the insurance industry was among the early believers. They have the most to lose.

A. Definitely. Especially the reinsurance companies. Munich Re and Swiss Re. They figured this out seven, nine years ago, that if they were the last ones holding the bag, they were going to be in trouble.

Q. One thing that I have heard in the past from people who participated in the divestment movement in the ’80s is that it was a lot of fun, but that it didn’t really have much of an effect on the end of apartheid. I’m assuming you’ve heard this before?

A. Divestment wasn’t the only force. There was a heroic resistance inside South Africa. There were oil sanctions.

Q. There was the move from the gold standard? I’ve heard that one.

A. That not so much. The gold standard did limit the price of gold, so that mine owners had to pay slave wages to miners in order to turn a profit. When gold prices floated that took the pressure off, but it didn’t have a huge effect.

But I spent 10 years on that project. I believe incontrovertibly that when you add up all the pieces, it had a tremendous effect. People who are cynical about it are just misinformed.

Q. I’ve heard that many universities and companies actually didn’t divest — they just shifted their investments into companies that themselves invested in South Africa, so that their connection was more hidden.

A. People go to tremendous lengths to split hairs. They will invest in a company that gives South Africans jobs but won’t sell arms. Or those companies that disinvested sold those shares to other companies with what is called a “clawback” so that they could buy back their shares when the political climate improved. But when the headlines in 1988 said “Disinvest Disinvest Disinvest,” all the fancy little footwork didn’t really matter. Did it happen? Yes. Did it matter? No.

Q. OK. Here’s a question that no one has been able to answer for me. What is the difference between divestment and disinvestment?

A. Disinvestment is getting U.S. companies to leave South Africa. Divestment is actually selling the stock in those. As in: I’m selling my stock in IBM instead of asking them to change how they do business. In a sentence it would be: “I’m going to divest unless you disinvest.”

A. That just means “getting rid of something.” People throw it around like it’s interchangeable with the first two, but it doesn’t mean anything.

A. In the spring of 1991, there was a woman named Katie McGinty who was a legislative assistant to Sen. Al Gore, who was very concerned about climate change. I went to see her in Washington and she was showing me around. I had just come off the Montreal Protocol about the ozone hole, and I suggested that if they wanted to raise awareness about climate change, they should have a meeting and invite all the deans of seminary schools.

I was teaching at Harvard Divinity School at the time, and my dean called me in a while later and said “This meeting looks interesting, but I can’t make it. Could you?”

And so I wound up going as a guest to the meeting that I had proposed. There were about 50 of us. Jim Hansen was there, and Tim Wirth, the senator who had organized the historic hearings on climate change, and Carl Sagan. We talked about how incredibly urgent it was. That was … over 20 years ago.

So I have been working on it ever since.