Everyone's talking about the Ferguson looters. Let's shame the polluters, too 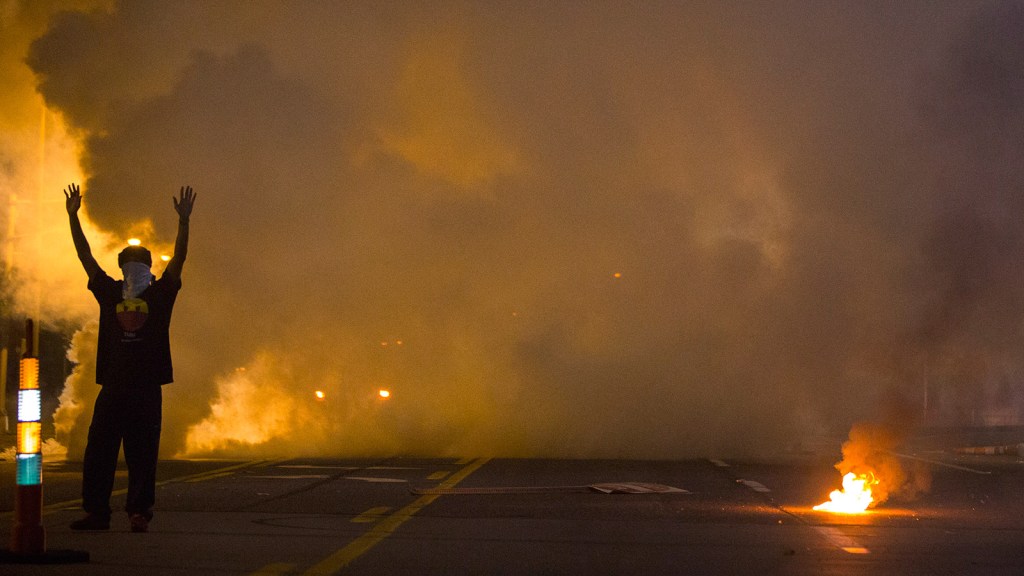 A demonstrator raises his hands in front of a fog of tear gas hovering over West Florissant during further protests in reaction to the shooting of Michael Brown near Ferguson, Missouri August 18, 2014. Reuters/Lucas Jackson
Climate & Energy

Everyone’s talking about the Ferguson looters. Let’s shame the polluters, too

A lot has been made of the damage done as the result of riots and looting following the shooting of Michael Brown in Ferguson, Mo. It’s fair to call it “looting” — cameras have captured people busting out of stores with merchandise in hand,* and there’s no way to intellectualize that. Economists are estimating millions of dollars in damages to businesses. But they’re also saying that most businesses will get that back through insurance.

As for the people of Ferguson, they will continue living with a different kind of damage for which there is no insurance. That is, the air pollution that’s been clouding the St. Louis metro region for decades. And really, we can include Missouri and the Midwest, given the way wind carries toxic air emissions beyond city and state boundaries.

Check the lung damage report: The St. Louis metro ranks No. 13 in the nation for ozone, which amplifies asthma, especially in kids — and No. 8 for year-round particulate matter, which can lead to cancer, according to the American Lung Association’s latest “State of the Air” survey. Summer heat only makes these problems worse (as does tear gas), and St. Louis summers are bound to only get hotter. How much hotter? Check out this graphic from Climate Central — just click on St. Louis:

The reason for this is Missouri’s fossil fuel dependency, particularly coal, which makes up close to 80 percent of the state’s energy mix. Its other two major energy sources are natural gas and nuclear, which are less harmful to the air and lungs, but both of which come with their own toxic waste risks.

According to a state pollution profile from the White House, Missouri power plants and major industrial facilities pumped out over 87 million tons of carbon pollution in 2012  — the equivalent of 18 million cars. By mid-century, as climate change impacts begin to sink in, “increased heat wave intensity and frequency, increased humidity, degraded air quality, and reduced water quality will increase public health risks.”

The companies responsible for this pollution in the St. Louis metro region are among the worst in the nation. The largest coal plants in the state are mostly run by three companies: Union Electric, Kansas City Power and Light, and the Associated Electric Coop. Kansas City Power and Light is owned by Great Plains Energy Inc., which is ranked number 25 among the top 100 greenhouse gas emitters in the nation by the Political Economy Research Institute.

Union Electric is a subsidiary of Ameren Corp., which ranks number six among the top 100 greenhouse gas polluters in the nation. Four of its largest plants for carbon pollution are in or near St. Louis. Its Sioux facility, a coal-fired power plant, in West Alton, 20 miles north of Ferguson, sits among a community that consists of 41.5 percent minority residents and 11.1 percent poor.

The Home Depot in Ferguson hired extra security guards to protect it from looters. But what’s protecting Ferguson from the fact that Home Depot has been out of compliance with the Resource Conservation and Recovery Act (regulating hazardous waste handling) since 2009?

None of this is new to St. Louis. In 1991, Kevin L. Brown did a study while at Washington University School of Law where he found that toxic waste facilities were disproportionately located in African-American communities, and that, naturally, exposure to toxic air releases were higher in these areas.

We can talk about looters in Ferguson, but when the lungs of these residents — 67 percent of whom are black, 22 percent of whom live below the poverty line — empty of tear gas, they will go back to their diet of ozone, particulate matter, and all the other toxic emissions in their environment. Where is their insurance? Where are their security guards? When tensions cool down, who will protect them from the extreme sun of upcoming summers, from the heat trapped by the air emissions companies are spewing now?

*(Editor’s Note: A previous version stated here that people were stealing TVs from the store Target. No such activity was captured on camera. I regret the error.)