It’s impossible for fossil fuel executives to get some damn peace and quiet. At its annual shareholder meeting in Dallas, Texas, Exxon Mobil faced investors’ demands that the company get serious about climate change adaptation and regulation.

Since 1997, Exxon Mobil has fended off similar demands from its shareholders, but not at this scale. Wednesday’s meeting included the largest coalition of climate-activist investors yet of two-dozen large shareholders representing $8 trillion under management. But eight of the nine climate shareholder resolutions still failed.

The one proposal that passed, at 62 percent of the vote, allows shareholders who hold 3 percent or more of the company’s shares for more than three years to nominate up to a quarter of the board’s directors every year. In theory, this could allow for a climate activist to become a director at the company.

One climate resolution that failed suggested a company report on how climate policies would impact its business. It was the second-most popular resolution, yet earned just 38 percent of the vote.

Other proposals included calls for more transparency on Exxon’s hydraulic fracturing activities, lobbying, diversity and makeup of the board, and its plans to adapt to a renewable energy economy.

Father Michael Crosby, a Franciscan priest from Milwaukee, presented a proposal asking for a climate expert to be put on the company’s board. “Not one person has any expertise on climate,” he said of the board. “Exxon Mobil has a chance to restore the public’s trust, it’s a time for conversion.”

Sister Patricia Daly, a Dominican nun from Caldwell, N.J., presented a resolution asking Exxon to adopt a policy acknowledging the 2 degrees Celsius target. “Our company has chosen to disregard the consensus in the scientific community,” she said. “As the world moves forward, Exxon Mobil stands still.”

“Many of the world’s largest investors are voting against the [Exxon] management today,” said Edward Mason, head of responsible investing for the Church of England.

The board recommended to deny all proposals presented.

“For many years now, ExxonMobil has held the view that the risks of climate change are serious, and do warrant thoughtful action,” said Exxon CEO and chair Rex Tillerson during the shareholder’s call Wednesday morning. But asked to cut the company’s ties with groups promoting climate denial, such as the American Legislative Exchange Council (ALEC), Tillerson declined.

All the while, the company insisted it’s serious about climate change, touting its three-decade commitment to climate research in a slide shown below. Tillerson left some things unsaid: While the company internally recognized manmade climate change as real, it advocated for skepticism publicly. 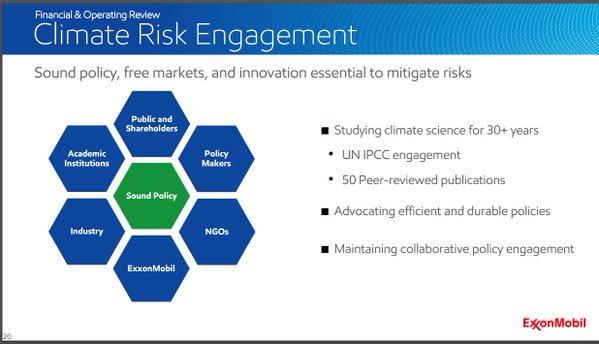 Though Exxon remains firm, it will see continued pressure from activists and worried investors. Outside the meeting in Dallas, climate activists swarmed, demanding that the company change its ways.

A little visual outside the @exxonmobil stockholder in Dallas. Protestors talked a lot of #ExxonKnew controversy. pic.twitter.com/kh1aaRcmBU