Rodrigo Romo’s daughter is afraid because of the oil and gas drilling activity happening around her school, Sequoia Elementary School in Kern County, Calif. She has trouble sleeping at night and has difficulty focusing in class because she doesn’t know what the industry’s pollution might be doing to her and her classmates. Romo doesn’t know how to answer when she asks him if they’re going to be OK.

This is what happens when companies don’t care about the lives of young people of color.

The FracTracker Alliance has mapped all of the alive and kicking oil and gas wells and their proximity to schools with large Latino and “non-white” populations. The Alliance found that 352,724 students attend schools that sit within a mile of the wells. That’s more students than the entire population of my native city of Pittsburgh.

Many of those wells are “stimulated” using hydraulic fracturing, or “fracking,” a technique that breaks up underground rocks to release oil and gase. Recent studies from the U.S. Agency for Toxic Substances and Disease Registry have noted elevated carcinogen levels near fracking sites. And yet California is one of 11 states that does not limit how close oil and gas drillers can work to houses, schools, and churches.

With that kind of freedom to roam, it’s no wonder the Alliance made these discoveries, pulled from its recent report:

The pollution that comes from fracking and oil drilling comes with its own threats to children’s respiratory systems and cognitive development. But adding to that travesty are the other sources of pollution circulating and ventilating through these schools, specifically with children of color, and particularly in California, though I’m sure it’s nothing unique to the state: pesticide drift from farming operations, air pollution from oil refineries, and additional toxic loads from waste in landfills. 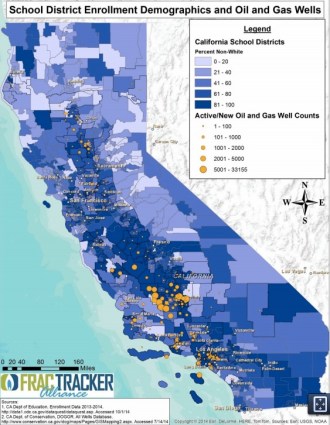 It’s notable that, when deciding where to drill for fossil fuels, these companies conveniently avoid areas where mostly white kids are attending school, somehow managing to operate more frequently near predominantly brown and black schools.

Those racial disparities “are not by coincidence,” said Madeline Stano, a staff attorney for the California-based Center on Race, Poverty and the Environment, who worked on the FracTracker report.

“There’s oil in Beverly Hills, but you won’t find [multiple] wellheads across from their schools and playgrounds,” she said in a phone interview earlier today.

One of the most overburdened schools in the state is Sequoia Elementary in Shafter, Calif., where Rodrigo Romo’s daughter attends, and where Stano organizes and has legal clients. It’s a poster for just the worst kind of learning environment you’d want to send your kids to: close not only to active wells, but also surrounded on three sides by a commercial almond farming, where copious amounts of pesticide are sprayed. “You can literally bounce a basketball from [Sequoia’s] playground to the wellheads,” said Stano.

Stano listed a few examples, when we spoke, of kids from that school suffering that are appalling by any standard: Children coming down in class with mysterious headaches, nosebleeds, and nausea. There’s a 9-year-old Latino boy who inexplicably has prostate cancer. A 12-year-old girl recently slipped into a coma while having a respiratory attack and did not survive — again unexplained.

No one can link these maladies directly to the pollution around them, but it’s hard to imagine that all of the pollution engulfing them while at school has been helpful for their health, let alone protective.

The oil and gas companies, of course, claim that these health problems come from other sources, but “you shouldn’t be able to drill first and ask questions later,” said Stano. “They are drilling where people are already overburdened [and these] are additional burdens that these kids can’t afford to bear and shouldn’t have to.”

Romo’s daughter was friends with the girl who never came out of her coma. That, alone, is a burden she’ll have to carry for the rest of her school years. Their school happens to be in on of the two districts with the highest well counts: Kern County is home to 33,155 oil and gas wells.

“I can’t imagine that thinking of your school as an unsafe place wouldn’t put additional stress on you,” said Stano. “I can’t imagine how that wouldn’t impact her ability to perform and thrive at school.”