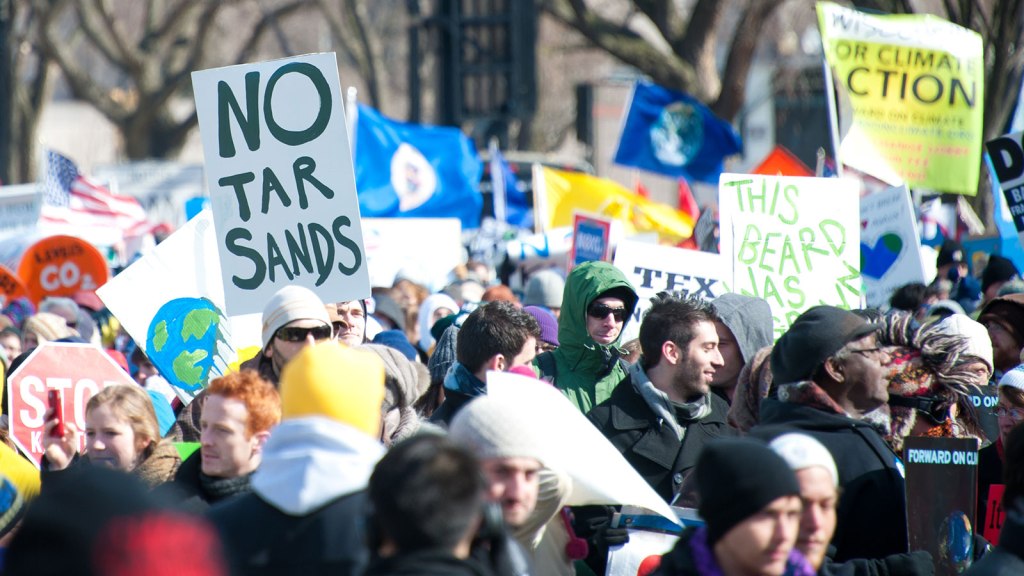 Perhaps it was inevitable, in the current Tea Party era, that a noisy progressive movement would draw comparisons to the right-wing insurgents who have taken over the Republican Party. And so — with climate change in the headlines, thanks to historic pledges from President Obama and Congress voting on Keystone XL — The Washington Post’s Dana Milbank has asserted that environmentalists are taking the same uncompromising attitude toward moderate Democrats that Glenn Beck fans in tricornered hats have taken toward moderate Republicans.

But Milbank overlooks essential differences between the climate movement and Tea Party movement.

This is Milbank’s take:

Here comes the tea party of the left.

On a rainy Monday morning, 50 sodden liberal activists stood on the muddy front lawn of the Capitol Hill home of Sen. Mary Landrieu, advocating for the Louisiana Democrat’s defeat. …

[Friends of the Earth President Erich Pica] wasn’t troubled that so many moderate Democrats with “wishy-washy positions on oil and gas” lost their seats this month. He said a smaller group of uniformly liberal Democrats would help his cause, “particularly as the president is trying to push through executive orders. Having a more united Democratic caucus helps.”

I’ve heard this argument before, coming from tea party activists who said that they would rather have a smaller but reliably conservative caucus than a large majority full of RINOs — Republicans in Name Only — who aren’t reliable votes. The emerging purists on the left aren’t nearly as strong as the tea party was (and they won’t be, as long as there’s a Democrat in the White House), but it’s noteworthy that Democrats are becoming more willing to purge those who aren’t ideologically pure. …

In other words: Be pure, or be afraid.

Milbank misses a key aspect of this demonstration on Landrieu’s lawn: It happened after the midterm elections. Green activists weren’t aggressively attacking Landrieu or other “wishy-washy” Dems when control of the Senate hung in the balance. They only did it after the Democrats had already resoundingly lost the Senate, and after Landrieu, who’s been aggressively pushing Keystone, was already polling way behind her Republican challenger in the Dec. 6 runoff race.

Most mainstream environmental activists take a very — some would say excessively — pragmatic view of congressional elections. This year, some major environmental organizations supported the few Republicans in Congress who voted to protect EPA’s authority to regulate greenhouse gases, like Sen. Susan Collins (Maine) and Rep. Chris Gibson (N.Y.), and Democratic Senate candidates in red states who backed Keystone, like Georgia’s Michelle Nunn. Green groups enthusiastically backed Sen. Mark Udall (D-Colo.) this year despite his avoidance of taking a stand on Keystone. They have not imitated the Tea Party and targeted pro–fossil fuel Democrats like Landrieu or Sen. Joe Manchin (W. Va.) with primary challenges from the left, because they know a more progressive Democrat in those states wouldn’t win. Even the most pugnacious climate-focused group active in this election season, Tom Steyer’s NextGen Climate Action, focused on taking down Republican climate deniers, not dirty-energy-loving Democrats.

Arguments about pragmatism aside, it’s unfair for Milbank to equate opposition to Keystone with the Tea Party’s politics. If you follow Milbank’s own logic, opposition to Keystone is rational, not radical. In May, Milbank identified “the contradiction at the heart of President Obama’s climate-change policy.” He wrote, “The president has made serious progress with renewable fuels and with energy efficiency … but this is being offset by increased production and export of fossil fuels.” And yet when environmentalists call for limiting fossil fuel production and export, Milbank paints them as being unreasonable.

The really big difference between Tea Partiers and environmentalists is that the former are making irrational demands and using irrational tactics, and the latter aren’t. The Tea Party movement continues to insist that congressional Republicans threaten to default on our national debt unless Obama agrees to their far-right agenda, including draconian spending cuts, repealing key provisions of Obamacare, and approving Keystone XL.

By contrast, 50 environmentalists held some signs and chanted some slogans on Monday, but they don’t pose any real threat to Democratic power in Congress, or anything else. The Senate is already in Republican hands. Landrieu was unlikely to keep her seat even if the Senate had approved her pro-Keystone bill. Tea Partiers are willing to risk the stability of the entire U.S. economy. Enviros, in this instance, were risking essentially nothing.

The main problem with the Tea Party — which isn’t at all replicated on the environmental left — is not their demand for purity, but their ignorance and nonsensicalness. As CBS News reported in a 2012 analysis of a massive poll of Tea Partiers, “Sixty-four percent believe that the president has increased taxes for most Americans, despite the fact that the vast majority of Americans got a tax cut under the Obama administration.” Ignorance goes a long way toward explaining their willingness to breach the debt ceiling: They don’t understand what it is or what its implications would be. The core of their policy demands are to cut taxes and balance the budget, without calling for big specific spending cuts. In 2010, when I asked regional Tea Party leaders what programs should be cut and by how much, they couldn’t produce an example other than NPR, which accounts for a minuscule fraction of the federal budget.

The mainstream media loves nothing better than to create an equivalence between “extremists” on the left and right. But this one is simply false.