If you didn’t experience last year’s polar vortex, let me offer a brief ode to The Great Northern Indiana Winter 2013-14: One morning, I woke up to a thermostat reading 36 degrees INSIDE THE HOUSE. It is because I endured you, Winter of 13-14, that I can consider myself a serious BAMF.

Climate change likely contributed to the cold weather carnage that swept the Midwest and eastern parts of the U.S. last winter. And this year, it looks like we’re not going to get a break. Here’s Slate’s Eric Holthaus with some cold comfort:

Over the last few weeks, seasonal climate models have shifted more and more toward the idea that this winter will be a doozy. Now that we’re within shorter range, the odds of recurring cold snaps — at least for the rest of November — are increasingly certain. Over the last few days, shorter-term weather models have locked on to the growing likelihood that — for the Eastern United States, at least — winter starts now.

Now? As in, now-now? Like, early-November-not-even-Thanksgiving-yet, now? C’mon Holthaus, you’re makin’ us noyvous. But according to meteorologists, there’s a super-typhoon set to hit Bering Sea on Saturday that is expected to hasten winter’s coming on the East Coast — and bring well-below freezing temps to the Midwest. Here’s a map of what you can look forward to next week: 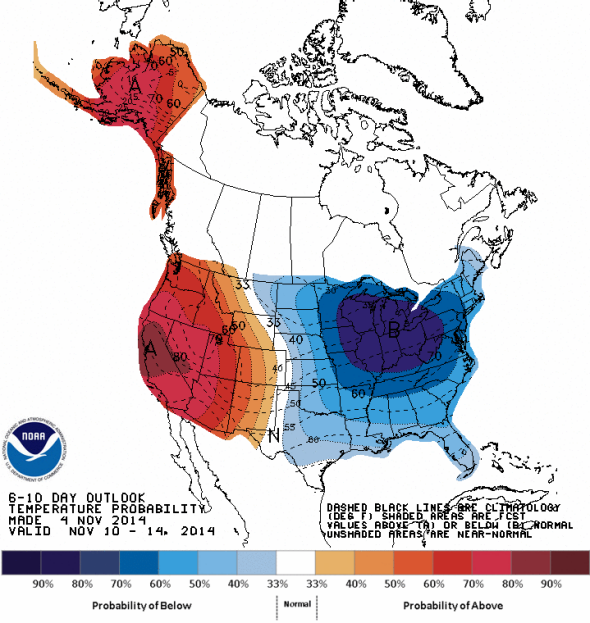 It’s not just the cold that’s getting out of control; the west was hit with unprecedented warmth this year — not to mention California’s continuing drought from hell. We know we’re starting to sound like scratched vinyl here, but climate change exacerbates extreme weather. In fact, according to a Stanford study, climate change makes extreme temperatures at least three times more likely. I, for one, am heating up my rice bags.