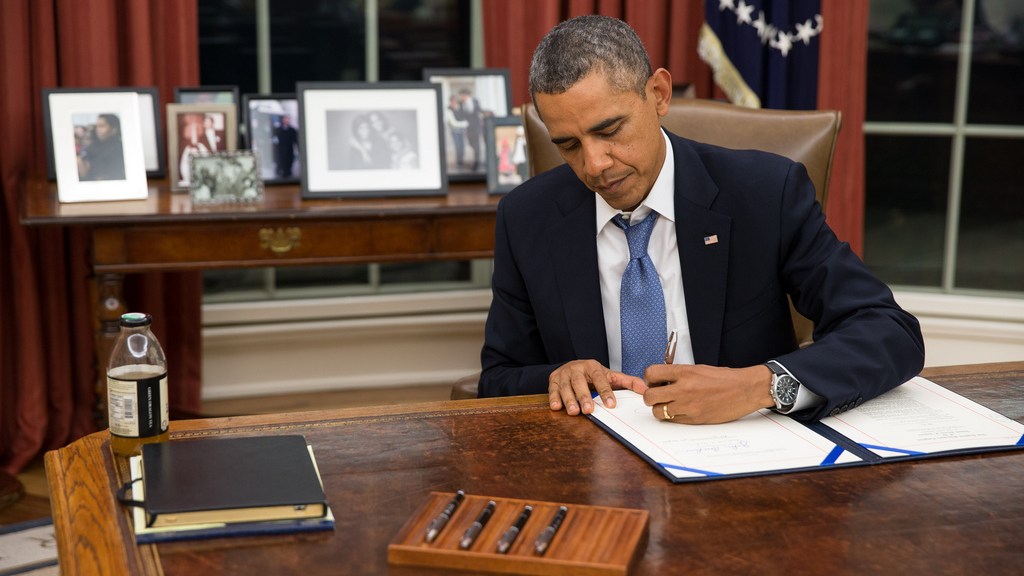 President Obama signed an executive order on Friday morning designed to prepare the country for climate-related disasters. (Didn’t anyone tell him we were busy recovering from the unnatural disaster that Halloween wreaks on our nation’s glycemic response?) The order comes on the dragging heels of Obama’s Climate Action Plan unveiled in June, at a time when Congress has mastered the Zen art of shooting down any sane climate-related proposal — even when it was their idea in the first place. Obama, impatient with the Flat Earthers, serves us up a chilling dish of executive truth:

The impacts of climate change — including an increase in prolonged periods of excessively high temperatures, more heavy downpours, an increase in wildfires, more severe droughts, permafrost thawing, ocean acidification, and sea-level rise — are already affecting communities, natural resources, ecosystems, economies, and public health across the Nation. These impacts are often most significant for communities that already face economic or health-related challenges, and for species and habitats that are already facing other pressures.

According to the administration, natural disasters cost the U.S. more than $100 billion in 2012. That includes damage from Superstorm Sandy, severe drought impacts on farmers, and the priciest fire season in recent memory. For the sake of our bank statements, if nothing else, it is time to invest in some real solutions.

The order calls on federal agencies to consider natural infrastructure that can serve the double-purposes of sequestering carbon and buffering communities from storms and heat waves. There is also an emphasis on collecting “authoritative, easily accessible, usable, and timely data, information, and decision-support tools on climate preparedness and resilience,” which will be available for public browsing on the ever-popular data.gov website.

But perhaps the biggest thing to come out of the order is a bipartisan (though largely Democratic — hello, token Republican, Gov. Eddie Calvo of Guam!) task force that will spend the next year hunting up ideas to improve resilience in U.S. communities — as well as a huge inter-agency Council on Climate Preparedness and Resilience, filled out by the senior officials of more than 30 departments of the federal government.

Over the coming year, the task force will develop a list of recommendations for ways that Uncle Sam can help encourage responsible, resilient development in communities around the country, which it will in turn pass off to the council, which will in turn collate and enact changes throughout the rank and file of the federal agencies.

Whew. Sounds like a big job — but luckily it’s Friday, so we can all take a breather, enjoy some unseasonably warm weather, and get to work preparing for a better future on Monday.