Yesterday I gave you six charts that show renewable energy is getting cheaper, from a new report by the International Renewable Energy Agency. Somehow in all that charting I forgot to make the main point I intended to make. So here’s a quick follow-up, with (only) two charts.

This one was in the post yesterday, showing how the costs for different categories of renewable projects fell between 2010 and 2014: 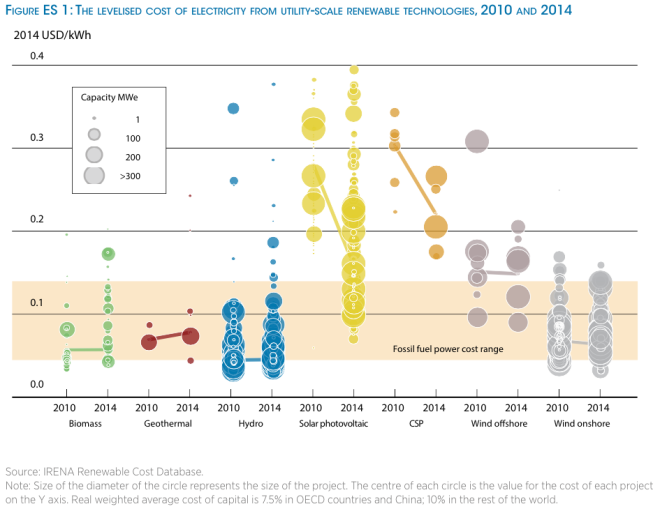 Today, I want to take special note of how wide the distribution of costs is within particular categories. The cheapest solar PV projects are coming in at about $0.07 per kWh, while the most expensive are $0.40 per kWh. That’s a huge spread! Spreads are wide and scattered in concentrated solar power (CSP) and offshore wind too. There’s a decent spread in onshore wind, but much more clustering. 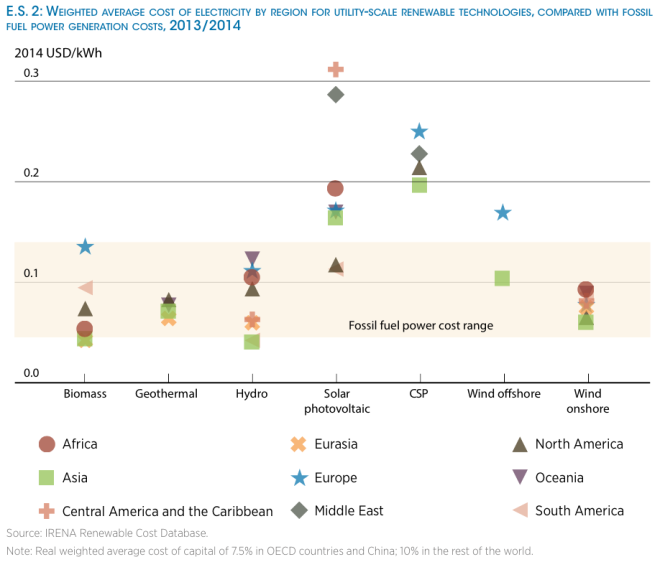 Again, notice the spread — the same kinds of projects are much more expensive in some places (especially Europe) than they are in others (especially Asia, i.e., China and India). You might think this is connected to the availability of the renewable resource in question, but that turns out not to be the case. After all, it’s quite sunny in Central America but solar PV projects are more expensive there than anywhere else!

Note also in both charts that there’s more clustering — i.e., costs are more standardized — when it comes to older, mature technologies like geothermal and hydro. It’s newer, variable renewables where the costs are so diverse.

So, how can we reduce that spread? How can we bring the cost of, say, the most expensive solar PV projects down to the level of the cheapest ones?

To date, it’s been the decline in equipment and technology costs that have driven down the cost of wind and solar. Says the report:

Renewable power generation equipment costs are falling, even as the technologies themselves continue becoming more efficient. The combination of these two factors has led to the continual, often rapid, decline in the cost of electricity from renewable-based technologies.

It’s worth dwelling on that point for a minute. The decline in equipment and technology costs will eventually level off. So to keep renewable energy prices declining, focus will have to turn to best practices — to giving every renewable energy project financing as cheap, operation and maintenance costs as low, and capacity factors as high as the best-in-class.

We’ve talked about this “soft costs” issue before in relation to rooftop solar power. Germany’s rooftop power costs are notoriously lower than America’s, not because Germans have access to cheaper or more efficient solar panels, but because German solar installers have much lower “soft costs” — it’s easier for them to find customers, to get permits, to get financing, etc.

Soft costs also explain the wide distribution of LCOE for utility-scale wind and solar projects. If climate hawks want to continue the forward march of renewable energy, they should focus on the non-technology costs that distinguish the world’s more expensive renewable energy projects from its cheaper ones. The work of improving social and business practices is not particularly sexy, especially relative to high-tech breakthroughs, but it’s crucially important.