If you are wondering why a pipeline that would create fewer jobs than a new McDonald’s is the No. 1 priority of what used to be known as “the world’s greatest deliberative body,” you are not alone.

The answer, unsurprisingly, has everything to do with money, and in particular, the Supreme Court’s tragic 2010 Citizens United ruling. After five years, we can now see clearly how this case has opened the floodgates to massive amounts of fossil fuel money.

Keystone XL is the top issue because the fossil fuel industry wants it to be — and they paid handsomely to make that happen. Take this month’s KXL vote in the House: Representatives voting in favor of the pipeline took a combined $13 million from oil and gas interests in 2014 alone, which was a whopping 8.5 times times more than those voting against.

And then there’s the impact of Citizens United, which goes far beyond a single vote or a single pipeline. The entire climate and energy landscape has been distorted by the huge influx of industry money since 2010. $13 million is in fact chump change for the oil and gas industry. In 2011-12, oil, gas, and coal companies spent $329 million in campaign finance contributions and lobbying expenditures and received $33 billion in federal subsidies over the same two years — a more than 10,000 percent return on investment.

This circle of legalized corruption is the best possible investment for the fossil fuel industry today, as the polluters confront a rising tide of climate science and citizen activism. With the heat on from fossil-fueled global warming, the price of bribery is going up. Thanks to Citizens United and the more recent McCutcheon decision, coal barons, climate deniers, and oily frackers are legally able to shovel virtually limitless amounts of money into the political system to ensure that every project is approved and no meaningful action is taken on climate.

The numbers tell the story clearly, as you can see in the graph below. Oil and gas industry spending in federal elections has steadily increased since 1990, with a massive spike since 2010. While we see the standard midterm slight dip in 2014, it’s a safe bet that 2016 will once again break records. 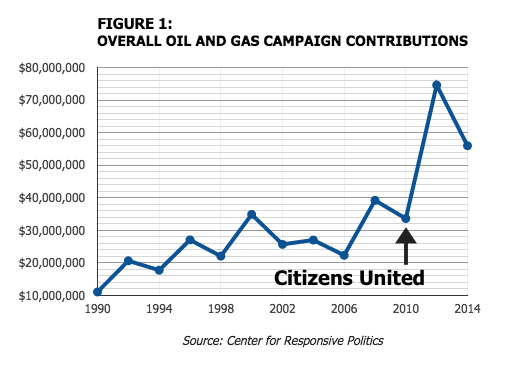 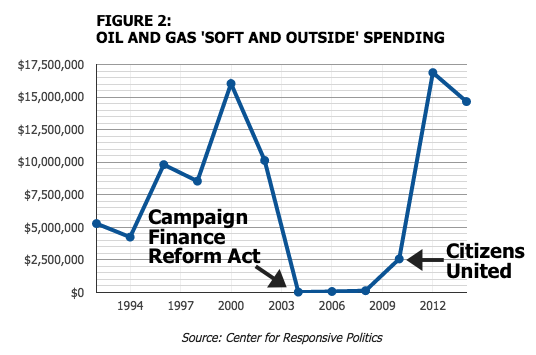 These expenditures were a major presence in elections until campaign finance legislation in 2002 slammed on the brakes. But in 2010, the Citizens United decision opened the doors once more and the results are clear.

The impact of Citizens United can be even more specifically seen when looking at spending by the newly legalized “super PACs” set up since 2010. Just three of these money laundering machines, The Congressional Leadership Fund, American Crossroads, and The Freedom Action Partners Fund, spent well over $220 million trying to influence the past three elections. All have close connections with, are funded by, or advocate on behalf of the fossil fuel industry. The amount spent by these types of outside organizations has skyrocketed since 2010 as they furiously work to buy up our democracy.

This has had a clear impact on attitudes on Capitol Hill. One D.C. insider recently told us that there are many more Republicans who believe and are concerned by climate science than are prepared to admit it publicly. They know for sure that if they try to break with the pack, they will be targeted by this now enormous fossil-controlled Death Star of Dollars, and they’re not willing to risk it. “It’s like being trapped inside Stalag Exxon,” we were told.

Another of the major players in campaign finance since Citizens United has been Chevron. In 2012, it gave $2.5 million to The Congressional Leadership Fund in one fell swoop, the single largest donation from a publicly traded company to a super PAC at the time. It followed this up with another $1 million donation in 2014.

But there’s hope — even Chevron’s near limitless supply of campaign cash couldn’t buy an election in Richmond, Calif., this past November. The oil giant spent more than $3 million in a massive political blitz to try to gain control of Richmond’s politics. And it had good reason: One of its dangerous, sprawling oil refineries sits within the city limits. In all, it spent roughly $72 per voter in an attempt to elect oil-friendly candidates.

What Chevron didn’t expect was the people-powered movement ready to meet it — one with enough energy to ultimately beat the oil giant. Tom Butt was elected mayor with 51 percent of the vote, beating the Chevron-backed candidate by 16 points. Not only that, but the Richmond Progressive Alliance representatives Eduardo Martinez, Jovanka Beckles, and outgoing Mayor Gayle McLaughlin also won three of the four open seats on the City Council. The icing on the cake? Butt spent roughly $58,000 on his campaign — a tiny amount compared to what Chevron put in.

The people of Richmond showed that people power can beat corporate cash — but we shouldn’t have to fight pitched battles against corporations trying to take control of our democracy.

Today, people all over the U.S. are continuing the fight to take this country back from the moneyed interests running it into the ground. In recognition of the five-year anniversary of Citizens United, Americans are joining together to demand a new type of politics, one that protects our climate and doesn’t bow to the interests of industry.

It’s time to separate oil and state and reclaim our democracy.