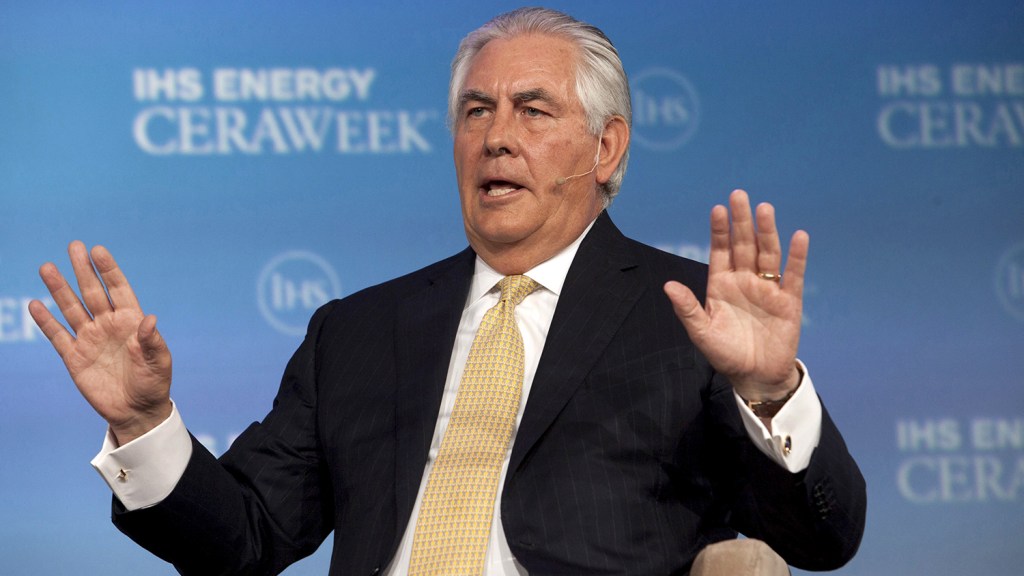 CEOs at big oil, gas, and coal corporations are rewarded for a short-term fixation on pumping up quarterly share prices. They receive pay perks for expanding carbon reserves and building unnecessary fossil fuel infrastructure. Share prices can get a temporary boost from corporate lobbying to maintain government subsidies and block renewable energy initiatives, and from campaign donations that help elect climate deniers to Congress.

In 2014, the average CEO pay package at the 30 biggest oil, gas, and coal companies was $14.7 million, 9 percent higher than average CEO pay on the S&P 500. These pay trends are documented in “Money to Burn: How CEO Pay Is Accelerating Climate Change,” a report I coauthored for the Institute for Policy Studies.

The highest-paid fossil fuel CEO is ExxonMobil’s Rex Tillerson, who hauled in $33 million in 2014, boosting his total compensation over the last five years to $165 million. ConocoPhillips, the largest holder of land and resource positions in the Alberta tar sands, paid CEO Ryan Lance more than $27 million in 2014, an 18 percent pay increase over 2013. Chevron CEO John Watson is the third-highest paid with a $26 million paycheck in 2014.

The full brunt of the climate catastrophe will happen after these CEOs have cashed in their stock dividends and deferred compensation.

Over the last five years, the 30 largest U.S. publicly held fossil fuel companies doled out compensation worth nearly $6 billion to 163 CEOs and top managers. This payout is comparable to the $6.6 billion that private corporations spent globally on renewable energy R&D in 2014. Such resources, directed to green energy infrastructure, could generate almost 100,000 new jobs, according to the IPS report.

The CEO pay system at major U.S. corporations has been under fire for decades. Research has documented how excessive CEO pay encourages short-term actions to boost immediate share prices, including cooking the books, slashing workers, and failing to make investments to position a company for economic health over the long term. In the case of big fossil fuel companies, this has horrific results for the climate.

These 30 fossil fuel corporations are leaders in an industry that is spending more than $600 billion per year to locate additional fossil fuel reserves. Climate scientists argue that burning more than 20 percent of existing fossil fuel reserves will elevate the earth’s temperature by more than 2 degrees Celsius, leading to catastrophic climate change. So deploying resources to identify new carbon reserves is reckless and irrational — except in the perverse reward system at work at most energy giants. The 13 biggest oil companies tie executive bonuses to achieving positive “reserves replacement,” ensuring that new carbon reserves replace those already extracted and burned.

Perverse pay incentives encourage big oil, gas, and coal companies to build billions of dollars of unnecessary fossil fuel infrastructure in order to boost short-term profit horizons. These CEOs are rewarded for new pipelines and drilling platforms that lock us into fossil fuels at a time when our nation should be shifting investment into conservation and renewable energy.

Gregory Ebel, CEO of the Texas-based Spectra Energy Corporation, was paid $10.3 million in 2014. Spectra is constructing hundreds of gas pipeline projects around the U.S. that, if we take climate change seriously, will be obsolete within a decade. The primary purpose of these projects is not to meet local gas needs, but to goose short-term profits by moving fracked gas to coastal terminals and global export markets as soon as possible. As a result, hundreds of communities are having unnecessary gas pipeline projects rammed through them, increasing energy costs and exposing neighborhoods to unnecessary health and safety risks.

Big Fossil Fuel also uses its considerable lobbying clout and campaign cash to advance a short-term political agenda. This includes lobbying Congress to protect an estimated $37.5 billion in annual subsidies and tax breaks for the fossil fuel sector. In 2014, the top 30 fossil fuel corporations contributed $4.4 million to congressional candidates who had either denied climate change science or expressed skepticism about it.

Corporate boards and shareholders could shift the incentives to reward long-term viability. CEOs could be rewarded not for finding new reserves, but for reducing carbon emissions. They could be encouraged to diversify energy sources and move toward renewables. Their deferred compensation could be tied to business health over a longer time horizon than two or three years. This would require challenging imperial corporate management. Over the last 25 years, ExxonMobil shareholders have introduced 62 shareholder resolutions about climate change to shift company practices. Management has opposed every one.

In the end, big fossil fuel will only respond to external incentives to shift their investment, such as carbon taxation and emissions regulation. But in the meantime, the campaign to divest from oil, coal, and gas (and invest in wind and solar energy) can weaken the political clout and legitimacy of the fossil fuel sector.

Chuck Collins is a senior scholar at the Institute for Policy Studies and coauthor of the report “Money to Burn.” He is founding co-chair of DivestInvest.org.