If you could speed-watch the past 15 years in Texas — set your thumb on the edge of a flipbook and let ‘er rip — you’d see astonishing growth. Buildings going up, fields paved over for parking lots, new subdivisions, new schools, new malls: The state’s population grew by 36 percent between 1997 and 2012. Watch the red lines that chart the state’s economy go up, up, up. Last year, Texas’ gross domestic product grew by 3.7 percent, nearly double the national rate. 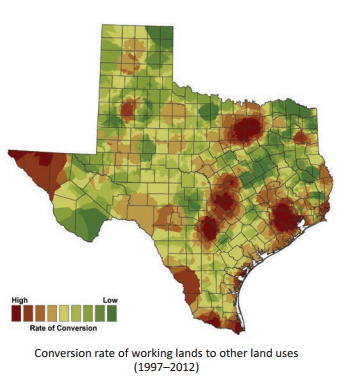 But at what cost? A new report from Texas A&M’s Institute of Renewable Natural Resources indicates that Texas is losing its open spaces faster than any other state in the union: About 1.1 million acres between 1997 and 2012. And while the loss of “working lands” — privately owned farms, ranches, or forests — is a song to developers’ ears, researchers say those lands are vital to the states’ water supply. In a Republic that’s grappling with a historic drought, thirsty Texans should be paying attention.

Some quick ecology: When it rains on open fields, soil acts like a sponge, allowing drops to slowly trickle into the water supply. In this way, working lands replenish aquifers, help reduce the incidence of floods, and maintain natural rivers and streams. 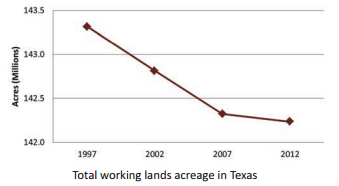 But when you lose working lands by developing them, you move to “basically an impermeable surface like a subdivision, a downtown city center, parking lots — a lot of concrete,” says Roel Lopez, the director of the A&M institute and a coauthor of the report. “When it rains, that water runs down drains and river channels, and you don’t have the ability to capture and store [it].”

That water loss is difficult to quantify. Lopez says his institute is still trying to figure out how much working land have been converted to impermeable, concrete-dominated development, rather than some other kind. Additionally, some of these lands are no longer being watered intensively for agriculture, so it’s possible that net water loss isn’t as bad as the report would seem to indicate. (Lopez says his institute will attempt to clear up both those questions in future reports).

Still, federal, state, and local governments have long recognized the ecological significance of open lands. Voluntary conservation programs (like USDA’s ACEP) give landowners financial assistance and tax breaks for taking steps to preserve their wetlands and water resources. But those programs aren’t as popular in Texas, Lopez says.

“There needs to be a great evaluation of emphasis, of [policymakers] seeing the link between water, water availability, water quality, and working lands,” Lopez says. And in the long run, conserving working lands and water now might save Texans money by obviating the need for drastic anti-drought spending. “Conservation might be a viable, cost-effective strategy,” he says.