In 2014, I wrote about the Wyoming state legislature actively moving to suppress real science education when it came to global warming. As I said,

Science itself has many laws, but it doesn’t give a damn about ours.

Those words still echo loudly when it comes to Wyoming. A new research paper has come out showing that snow melt in the northwest region of that state is occurring earlier all the time, exactly as you’d expect with warmer winters and spring.

The scientists used satellite data to measure snow extent over time and found that snow is melting 16 ± 10 days earlier in the 2000s compared with 1972 to 1999. 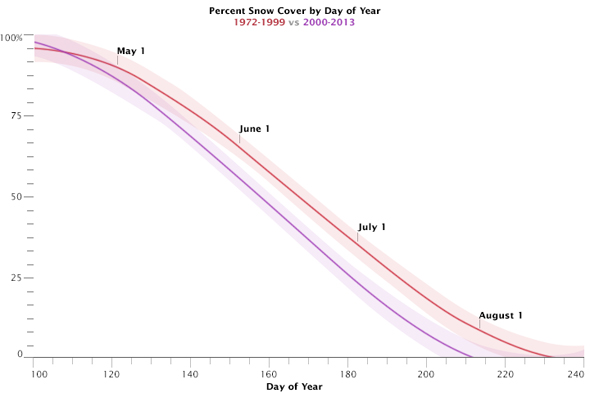 This plot shows the amount of snow cover (vertical axis) over the day of year (horizontal). The red line is the average from 1972 to 1999, and the purple from 2000 to 2013. The purple line is lower, meaning that at the same time of year, there was less snow in the more recent measurements than there used to be. Snow is melting earlier.

That has profound consequences; state agriculture depends on that melt water. If the melt is happening earlier that implies there’s less time for snow to accumulate on the mountains there.

Less snowpack on mountains west of the Continental Divide means less water for the western states, where there is a monumental drought. If you think global warming and climate change are things that will only happen sometime in the nebulous future, think again. They’re happening now.

Some good news: Happily, the state legislature in Wyoming managed to reach a compromise that should allow teaching good climate science in their public schools (hopefully). But there is still a provision for them to review specific educational standards, and there’s still a passel of climate change deniers in office there. We’ll have to see how this plays out.

And not to shock you, but both U.S. senators from Wyoming are Republicans, and both deny the impact of global warming. Mike Enzi confuses climate with weather (he’s not alone in that sort of ridiculous bluster, of course), and John Barrasso has a long list of attacks on the Environmental Protection Agency and the science of climate change.

We can’t make any progress on the real and potentially devastating effects of global warming until we have politicians who understand it and take it seriously. The good news is that more voters, even Republican voters, are saying that global warming is real. The bad news is that they don’t seem to care enough to act on it.

As water disappears from the west, and one heatwave after another settles in on various locations, as storms get worse and wildfires more damaging, it’s long past time we cared enough. Long past.

Permafrost may not be the ticking “carbon bomb” scientists once thought