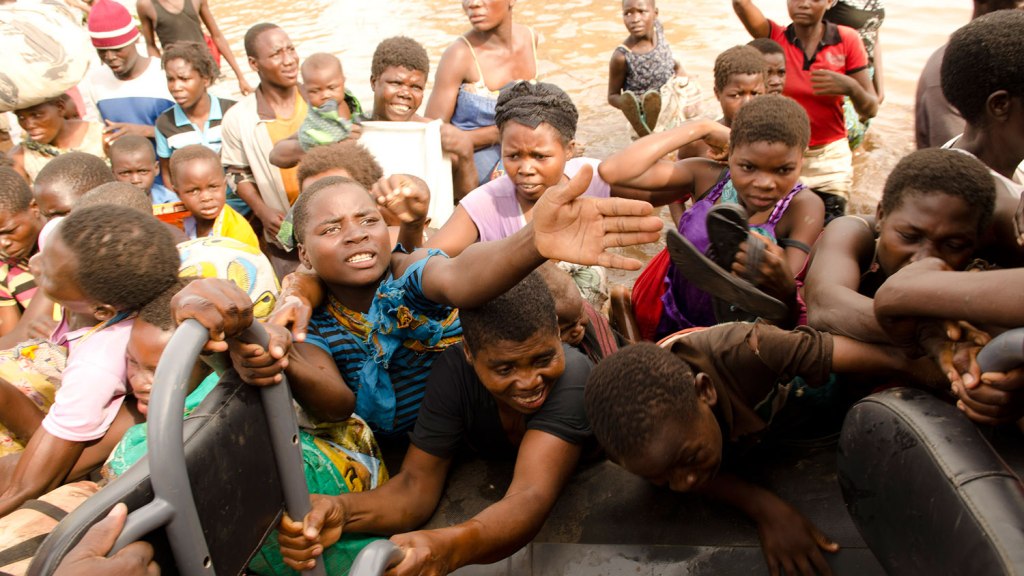 Sorry, polar bears, I’ma let you finish — I know it’s your day and all — but some of the worst climate change impacts are still happening to humans, particularly those with the least resources to withstand them. This was the point made today by Janani Balasubramanian, in her polemic, “Why Climate Change is a Human Rights Violation,” for Fusion. Her opening sentence alone probably melted a few polar caps in the past few hours: “The rise in sea levels isn’t a coincidence or an act of God – it’s a man-made weapon.”

That’s a hell of a statement, something like a caption for Beasts of the Southern Wild. And she takes it even further, saying, “Sea level rise is a type of ‘natural’ weaponry generated through the domination of water and air by specific world powers.”

The framing here is key: understanding the rise in sea levels as solely an environmental phenomenon prompts us to try to save polar bears and ocean water. Understanding sea level rise as a weapon makes us wonder ‘who’s pulling the trigger?’ and ‘who designed the gun?’

It’s within this context that we see Balasubramanian’s larger point that thousands, if not millions, throughout the Global South are being displaced, maimed, and killed because of climate change-related disasters summoned from fossil fuel powers. Those companies, and the governments that have enabled them, need to be held accountable, but they’re not. To prove her point, Balasubramanian brings up the recent floods in southern Malawi, which as of Feb. 11 have caused 104 deaths, injured 645, and have left an additional 172 missing. Worst of all, the floods have displaced over 230,000 people.

Balasubramanian says we probably don’t know this is going on because “if you go by media coverage, polar bears are a bigger story than the mass death and displacement of people — largely poor, mostly brown — across the world.”

It’s difficult to judge the veracity of that statement. It is National Polar Bear Day after all. Looking at Google Trend data, it appears that “Malawi” as a search term has been grabbing more news headlines globally than polar bears, especially since the flooding started in mid-January.

But you can also see that the “floods” have received far fewer headlines, while “mass displacement” barely registers at all. This suggests that the media isn’t showing the whole picture. It is falling down on its job to show human suffering from these disasters, possibly because it’s happening in areas of the world that are rendered invisible in our collective consciousness.

This part of Africa floods around this time of the year annually, according to one Malawi village man, as reported in PRI. But this year’s floods are unusual. PRI reports:

The causes of the disaster are a complex mix, including those torrential rains, of high population density and deforestation. In the Shire river watershed, the hillsides have been completely deforested for cooking fuel, among other things, so there’s nothing to stop the huge amounts of rainfall from surging into the valleys.

Climate change may also be involved. The intensity of the storm system behind the floods fits with what climate models have been projecting could happen as carbon emissions trap more energy in the atmosphere. These storms can have devastating effects on poor countries like Malawi, where many families live in simple mud brick homes and farm land that can’t withstand this kind of weather.

As I wrote recently, nothing clears out communities like climate change. I don’t know if the floods, or the rising seas, are a “weapon” used against the poor. It’s likely more collateral damage from industrialized nations at war with themselves over how to grow wealthier. But what I think doesn’t matter. When you read in PRI about these people stranded in Malawi, climbing on top of termite mounts, crocodiles circling them in the water as they wait for helicopters or boats to rescue them, you can’t help but think of them as victims of weapons of injustice. You can’t help but think of similar scenarios of people in New Orleans after the levees broke, stranded on roofs, with law enforcement officials pointing guns at those seeking higher, dryer ground.

And, if I’m honest, I can’t help but think of polar bears, as corny as it might sound, stranded on melting ice sheets.  The first article I ever wrote about the environment, for the American Prospect, was about endangered polar bears in the Arctic, and how indifferent then-Alaska Governor Sarah Palin was to their well-being. I wrote five years ago:

Alaskans will have to live with the consequences of those emissions regardless of any effort to reverse climate change. But the Arctic sea ice is retreating much more vigorously than scientists ever imagined, and some propose it’ll be gone by the next decade. The subsequent sea rise and releasing of carbons from permafrost thaw could lead to flooding in close-to-coast cities, intensified storms and the extinction of entire ecosystems.

Polar bears, largest of all bear species, would be among the major casualties. They use the sea ice to trot for seals, which are their primary feed. Without the ice beneath their feet, bears would starve or resort to cannibalism. Many young bears would break thin ice and drown. The survivors would acclimate to land, hungry for seal-meat replacements, and wind up in us-or-them confrontations likely to end with a gun.

The situation up there hasn’t much improved, especially with Obama now allowing oil drilling in certain parts of the Arctic.

My point is not to equate polar bears with Africans; Balasubramanian’s point about climate change being a human rights problem is indisputable. My point is that climate change can be a weapon of mass destruction when governments fail to protect their most vulnerable, whether that’s people or animals. Current EPA Chief Gina McCarthy once said that her agency’s job was about protecting people, not polar bears. That’s fine, but the sleuthing is the same for both groups: We need to know who’s designing the guns, who’s pulling the trigger, and they need to be held accountable.