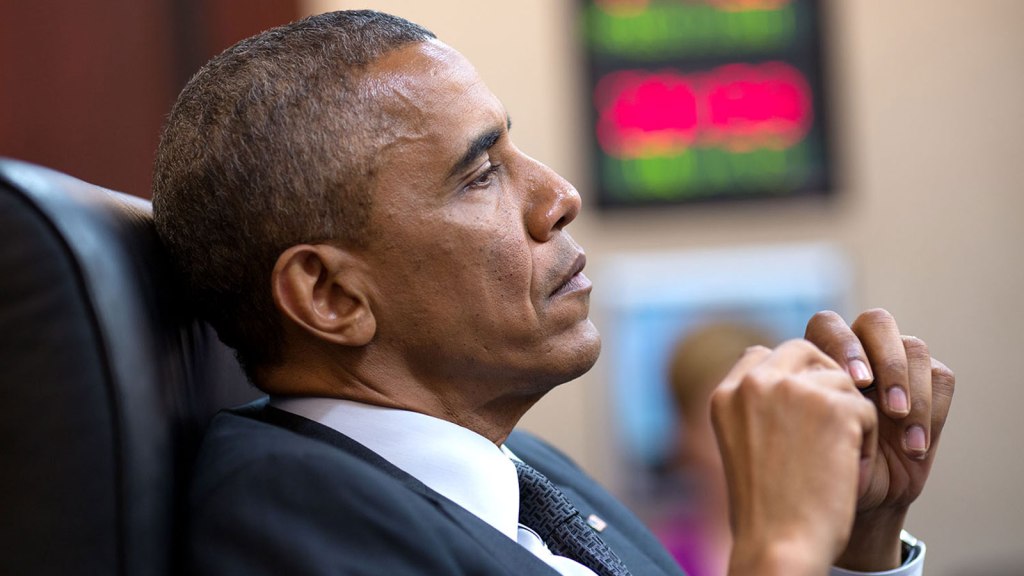 President Obama is once again contradicting himself on climate change. His new push for offshore oil and gas drilling is just the latest instance.

Last week, in his State of the Union address, Obama reiterated at length the urgent threat climate change presents and the importance of taking decisive action to address it. “The Pentagon says that climate change poses immediate risks to our national security,” he said. “We should act like it.”

But Obama himself isn’t acting like it. This week, his administration released a draft of its next five-year plan for offshore drilling. It would open up a previously off-limits area along the Southeastern coast, from Virginia down to Georgia, as well as offer many new oil leases in the Gulf of Mexico. And while it would protect some key areas north of Alaska from drilling, it would open other Arctic areas up.

So, after bragging in the State of the Union that “we’ve set aside more public lands and waters than any administration in history,” Obama is inviting fossil fuel companies into previously undisturbed public waters. This was a quick turnaround from just two days before, when environmental groups were singing Obama’s praises after he proposed to permanently protect much of the Arctic National Wildlife Refuge from oil development by declaring it a wilderness area. Now, those groups are criticizing him for threatening the very same region.

The Alaska Wilderness League expressed relief that Obama is at least protecting the Chukchi and Beaufort seas in the Arctic, but the group’s executive director, Cindy Shogan, insists that the administration needs to “take all Arctic leasing off the table.”

Friends of the Earth climate campaigner Marissa Knodel points out that oil and gas under the Arctic Ocean, much like the Canadian tar sands, cannot be extracted if we are to avoid ruinous climate change. Like other unconventional or “tight” fuel sources, Arctic oil is more energy-intensive and risky to access than the stuff that used to bubble up from the soil in Texas.

“A major study that just came out in Nature said if we’re serious about avoiding climate catastrophe, drilling in the Arctic has to be off the table,” says Knodel. “Drilling in the Arctic requires more energy to get [oil] and transport it because it’s so remote and such a dangerous environment.”

To get a sense of how dangerous it is, just look at Shell. “Every time Shell tries to drill there, there are accidents,” says Knodel. In 2012, after months of embarrassing mishaps as the company drilled a test well in rough and icy Arctic conditions, Shell decided to tow its oil rig 1,700 miles southeast to get out it out of Alaskan waters in order to avoid paying state taxes. The rig became unmoored and ran aground. A Coast Guard report later faulted the company for “inadequate assessment and management of risks.” This week, the good corporate citizens at Shell announced that they want to try drilling exploratory wells in the Arctic again this year.

The Interior Department frames the new leasing plan as “part of President Obama’s all-of-the-above energy strategy to continue to expand safe and responsible domestic energy production.” If Obama were the man of science he claims to be, he wouldn’t tell the lie that offshore drilling is “safe and responsible.” (As Obama should remember, he has done this before, in 2010. Just a month later, the BP Deepwater Horizon rig exploded.) And if he cared about climate change as much as his State of the Union suggested, he would drop his “all-of-the-above energy strategy” in favor of a clean energy strategy. Any real effort by Obama to use executive authority to combat climate change would include a moratorium on new offshore oil and gas leasing.

“It’s contradictory,” says Knodel. “[Obama has] clearly committed to leave a safe and healthy environment for future generations. But then he remains committed to this ‘all-of-the-above’ energy policy.” You can’t have it both ways.