Katrina and Sandy cost over 2,000 lives. Will we do better next time? 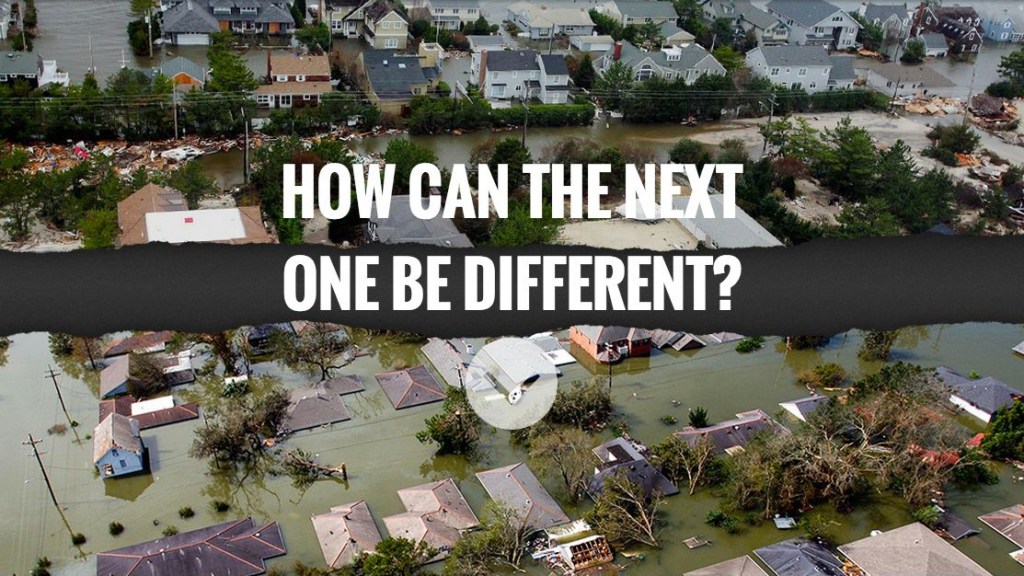 Katrina and Sandy cost over 2,000 lives. Will we do better next time?

Looking back, nine years ago this week, when Hurricane Katrina landed on the Gulf Coast, making a mockery of the federal levees in the process, the looming question is, What did we learn? We want to know the same about Superstorm Sandy, which struck the East Coast two years ago. Fortunately, there are quite a number of films and documentaries that show and tell the lessons from these tragedies, which collectively claimed over 2,000 lives and caused roughly $170 billion in damage.

Today, you can find the synthesis of those lessons in a new multimedia project called Katrina/Sandy, an interactive web timeline of the disasters. Videos are assembled across a narrative arc that spans from the storms themselves, to the immediate aftermath, through the rebuilding stages, and then landing on questions about the future. It was produced by filmmakers Luisa Dantas, whose Land of Opportunity project has been gathering the stories of New Orleans communities recovering in post-crisis mode over the last eight years; and the Sandy Storyline team of Rachel Falcone and Michael Premo, who’ve both worked with award-winning oral history projects like StoryCorps and EarSay, Inc.

“After Katrina, the world was shocked by the devastation, the inequity, and the government’s incompetent response,” Dantas says. “As documentary media producers, we wondered what we can learn by placing stories and scholarship from Katrina and Sandy side-by-side.”

Katrina/Sandy also infuses the work of other documentarians such as Leah Mahan, who produced the Gulf disaster documentary Come Hell or High Water, into the timeline. Photographer Nathan Fitch provides his short film, The Darker Side of Dreamland, where he follows an 81-year-old Coney Island native named Adeline as she goes for weeks without heat or electricity after Superstorm Sandy:

All of the videos focus on people affected in myriad ways by the too-big-to-pass storms, and their struggles in piecing their lives back together.

At the end of the web timeline, the project’s creators ask visitors to share their vision for the future.

For Louisiana, that future looks grim. As reported in this joint project between ProPublica and New Orleans investigative news nonprofit The Lens (an organization where I once worked, and helped start), the state is losing its coast at an alarming rate. Its wetlands, which normally would serve as a natural buffer against storms, are eroding away fast and furiously, thanks to the labyrinth of oil and gas pipelines that run through them. Meanwhile, scientists from the National Oceanic and Atmospheric Administration estimate that Gulf sea levels could rise as much as 4.3 feet by 2100, which could effectively wipe out most of Southeast Louisiana.

New York City and New Jersey face their own challenges.

The challenge now is for coastal cities to find ways to take optimum adaptive and protective measures from future hurricanes and climate change impacts, as Grist’s Greg Hanscom has been reporting. The government officials and planners in charge of those processes might be well-served to watch a few of these Katrina/Sandy videos to guide their work.