Life sucks in "The Hunger Games: Catching Fire" because of climate change 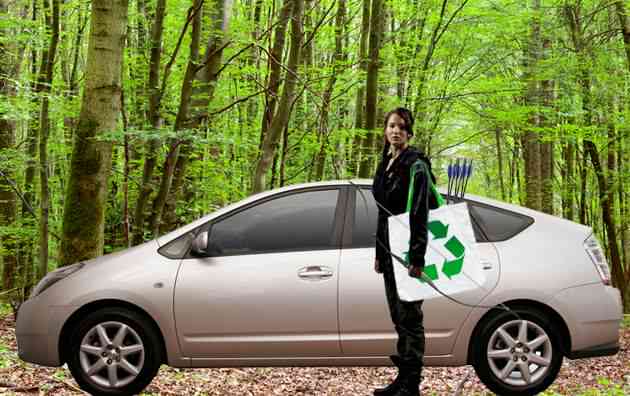 Life sucks in “The Hunger Games: Catching Fire” because of climate change

You can blame a lot on human-made climate change. Worsened violence in Syria. Bigger wildfires. Bad health. The totalitarian hell and political repression in The Hunger Games franchise.

This weekend, The Hunger Games: Catching Fire (the sequel to the popular 2012 installment) arrives in theaters to critical acclaim and a practically guaranteed place in box-office history. This film is more thrilling, more emotionally intense, and much, much better than its predecessor. The new additions to the cast — particularly Jena Malone as the ax-swinging Johanna Mason — are solid.

The characters are older, but the basics are the same: The movie follows archery-proficient heroine and future revolutionary Katniss Everdeen (the Oscar-winning and irrepressibly likeable actress Jennifer Lawrence), a citizen of District 12 of Panem, the dystopian realm comprising a flourishing Capitol and an archipelago of oppressed and starving provinces. President Coriolanus Snow (Donald Sutherland) commands an army of “peacekeepers” who regularly flog and gun down dissidents. And, as punishment for a past uprising, the Capitol annually seizes children from the districts and forces them to compete in a nationally televised death sport known as the Hunger Games — which is essentially a cross between Survivor and the New Mexico State Penitentiary riot.

Catching Fire pushes the franchise closer to the eagerly anticipated all-out rebellion that’s detailed in Suzanne Collins’ book series on which this saga is based. But as the film series progresses, it’s a good time to revisit exactly why things are so horrific in the Hunger Games universe. The explanation for this is glossed over in the films, but the first book offers some clarification in the early pages. The novel reads:

It’s the same story every year. [The mayor] tells of the history of Panem, the country that rose up out of the ashes of a place that was once called North America. He lists the disasters, the droughts, the storms, the fires, the encroaching seas that swallowed up so much of the land, the brutal war for what little sustenance remained. The result was Panem …

So there you go: The democratic societies of the United States, Mexico, and Canada were destroyed by climate disasters caused by global warming, and this led to mass bloodshed over scarce resources. That’s why everyone in Panem — except for the Capitol’s affluent — is starving, poor, and subjugated. That’s why the residents of District 12 are forced to slave away in dangerous coal mines to power the shimmering Capitol. And that’s why peasant kids have to butcher each other in the wilderness to entertain a decadent and desensitized 1%.

Go ahead and blame the Hunger Games on climate change and pollution. You can already blame it for Kaiju, sharknados, and insignificant but terrifying global bacon shortages.

Here’s a trailer for Catching Fire: