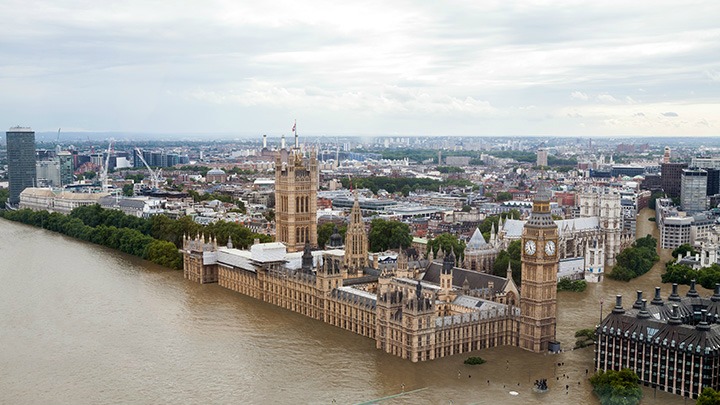 In the first image for each pair, we show projections of post-2100 sea-level rise that could be locked in following 4 degrees C (7.2 degrees F) of warming from carbon pollution in the coming decades. This pathway corresponds roughly to business as usual.

In the second image, we show projections based on 2 degrees C (3.6 degrees F) of warming from carbon pollution. This degree of warming corresponds to the target limit widely discussed today as the threshold to avoid catastrophic climate change — and officially designated as part of the Cancun Agreement, signed in 2010 by international delegates gathered under the umbrella of the United Nations.

In December, a major new round of global climate talks is being held in Paris. The decisions reached there may have a strong bearing on which of these two scenarios the future looks like most.

Projections of locked-in sea level come from our peer-reviewed research published Oct. 12 in the Proceedings of the National Academy of Sciences of the U.S.A. A special Climate Central-led report, published Nov. 9, describes the application of those projections to global elevation data for making the maps upon which these images are based.

The same maps are displayed at Mapping Choices, our interactive tool that allow users to explore the possible consequences of 4 degrees C warming, 2 degrees C warming, or other temperature or carbon emission scenarios, for any coastal city or postal code around the world.

The images below were created by visual artist Nickolay Lamm based on Climate Central’s sea-level map data.

Benjamin Strauss is a member of Grist’s board of directors.