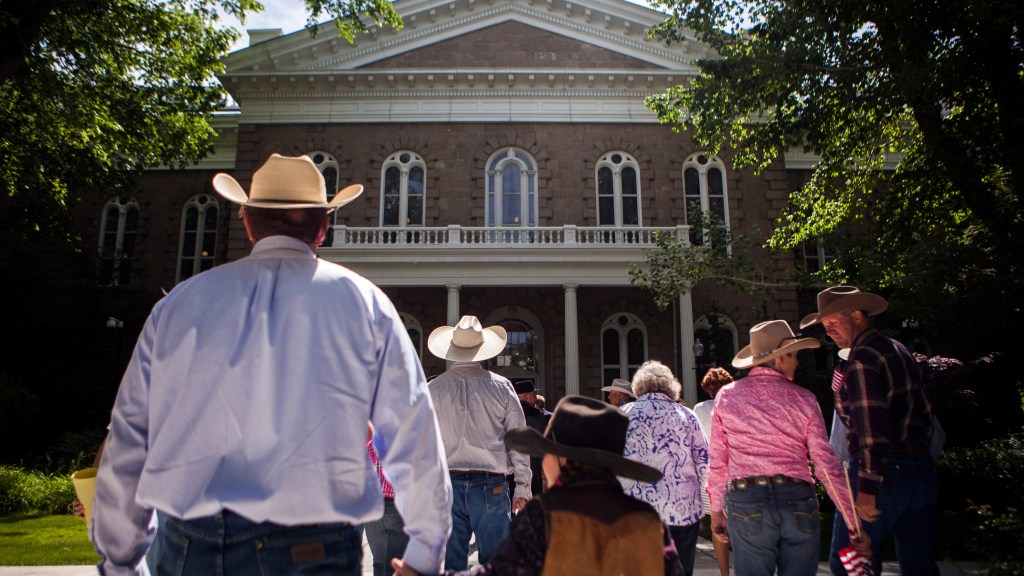 This story was originally published by Reveal from The Center for Investigative Reporting and is reproduced here as part of the Climate Desk collaboration. Subscribe to the podcast and learn more at revealnews.org.

It was an anti-government rebellion in the Nevada sagebrush — with hefty taxpayer subsidies for the rebels.

In June, tough-talking ranchers in remote Battle Mountain, Nev., defied the federal government, herding cattle onto public rangeland that had been closed to grazing to protect it during the West’s scorching drought.

That act of defiance capped two years of protest against grazing restrictions imposed by the U.S. Bureau of Land Management, which manages thousands of square miles of arid federal land in Nevada.

In the end, the federal government backed down from the confrontation in Battle Mountain. The BLM canceled the drought closures and opened the range, just as the cattlemen wanted.

By denying the severity of the drought — and by claiming that “rogue” federal bureaucrats threatened them with economic ruin — the ranchers won the day. But even as the conflict played out, some of these same ranchers were collecting drought subsidies from the federal government.

On one hand, they denied the drought. On the other hand, they embraced it.

According to records obtained by Reveal, two ranching families at the center of the Battle Mountain protests received $2.2 million from a federal drought disaster relief program.

Dan Filippini, the protest leader who turned hundreds of cattle loose on the closed range, was paid $338,000 by the U.S. Department of Agriculture’s Livestock Forage Disaster Program in 2014, records show.

Another $750,000 federal payout went to a trust and corporation associated with the Filippini family, which long has been active in ranching in Nevada.

Meanwhile, significant payments also went to the family of Battle Mountain cattleman Peter Tomera, who with his wife and sons rode on the Grass March Cowboy Express, a 2014 horseback ride to Washington, D.C., to protest the government drought restrictions. The records show that the government paid $250,000 to a Tomera family trust and another $360,000 to a family corporation.

An additional $540,000 was paid to other members of the extended Tomera family and to a related corporation, records show.

The subsidy program compensates ranchers who claim financial losses because a drought disaster has driven up the cost of feed for livestock.

Environmentalists derided the ranchers as drought deniers who nevertheless want a government handout for drought relief.

“It’s another example of the hypocrisy,” said Laura Leigh, founder of Wild Horse Education, a Reno nonprofit that seeks to protect wild horses on the Nevada range. “They want to run full numbers (of cattle) and claim there’s no drought, and they want to collect drought subsidies besides.”

In a telephone interview, Lynn Tomera acknowledged that her family had received drought relief funds but said she was unsure of the amount.

She defended her family’s receipt of the drought subsidies and acknowledged there is a drought on the range. She blamed the BLM for using the drought to make life harder for ranchers.

“If the ranchers were met with a little bit more cooperation and help from the local BLM offices, we wouldn’t be in such a bad position where we needed to bring the cattle in quicker, where we needed to buy more hay,” she said. “There is a drought, there is no two ways about that, but I feel the BLM is using it as one of their many tools to restrict grazing or curtail it altogether.”

But during the protests, ranchers repeatedly contended that the BLM’s concerns about the drought were overblown, according to documents and news accounts.

In a 2014 appeal of the BLM’s closure order, lawyers for the Filippini family flatly asserted that “no drought exists” on the Battle Mountain range.

The lawyers contended that the U.S. Drought Monitor, a scientific survey the BLM relies on to track drought conditions, wasn’t reliable and “moisture conditions” on the range were normal.

Katie Fite of the environmental group WildLands Defense said the range around Battle Mountain is “devastated and needs significant rest” from the ranchers’ activities.

“They truly think they are the lords of yesteryear and the public lands are their own little fiefdom,” she said.

At its height, the Battle Mountain protest attracted the support of conservative Nevada lawmakers, states-rights advocates and backers of Cliven Bundy, the Nevada cattleman whose refusal to pay federal grazing fees led to an armed standoff with federal lawmen in 2014.

The protest tapped into long-standing resentment of the BLM, which controls about 48 million acres of federal land in Nevada. The agency leases public land to ranchers for grazing while administering the Endangered Species Act and other federal environmental regulations.

In Battle Mountain, a desert town about 200 miles northeast of Reno, anger flared in 2013 as the impact of the West’s worst drought in decades began to be felt.

A BLM manager, Doug Furtado, ordered closures on about 180,000 acres of range west of town, saying he was concerned that grazing cattle there would cause lasting damage to lands already stressed by drought.

After Filippini’s appeal of the closure order was rejected, the ranchers’ protest began in earnest.

They put up signs near the BLM offices reading, “Honk to Impeach Furtado.” They persuaded elected officials in three counties to call for the range to be opened and the BLM director to be fired.

And in fall 2014, the ranchers made their 21-day horseback trek to the U.S. Capitol. There, they delivered a sheaf of petitions to Congress infused with anti-government rhetoric.

“Regulation without Representation is Tyranny,” one petition read. “The Grass March Cowboy Express is bigger than Bundy,” it also said, referring to the rancher who had faced down the BLM.

The petitions called for firing Furtado and opening the range and included other demands dear to ranchers and Nevada state-rights advocates: The government should back off on enforcement of the Endangered Species Act, stop protecting “surplus wild horses” on the Nevada range and not designate public lands as protected wilderness areas.

In testimony before a congressional subcommittee, the march’s leader, Elko lawyer A. Grant Gerber, went further, calling on Congress to deed all federal land in Nevada to the state to ensure local control. That has long been a goal of the Nevada Committee for Full Statehood and other state-sovereignty groups that have challenged the BLM. Gerber died on the return trip after a fall from his horse.

The last act in the protest occurred June 2, when Filippini trucked about 300 head of cattle to a stretch of range called the North Buffalo Allotment and turned them loose, despite the closure order. Among about 40 supporters at the scene were two Elko County commissioners, Demar Dahl and Rex Steninger. The elected officials helped herd the animals onto the closed range, the Elko Daily Free Press reported.

In an interview with the newspaper, Filippini’s wife, Eddyann, vowed continued resistance to the BLM.

“We are not conceding any more,” she said. “We can’t and survive. If we quit, our way of life and that of our children will be gone.”

In a letter to the newspaper’s editor, she wrote that the “government agencies that administer grazing have gone rogue. They have shoved their bureaucratic policies down our throats.”

The Filippinis did not respond to voicemail messages, a Facebook message, and a letter from Reveal seeking comment.

Rather than moving against Dan Filippini for trespassing — and risking a prolonged Bundy-style confrontation — the BLM quickly negotiated a settlement. Under its terms, the closed range was reopened to grazing. In exchange, the Filippinis agreed to drop further appeals of the prior closure orders.

Environmentalists complained that the BLM rewarded the ranchers for violating the law, allowing them to run cattle on a drought-stressed range that they said already was battered by decades of overgrazing.

“The livestock industry enjoys heavily subsidized grazing privileges,” said Kirsten Stade of the Washington-based group Public Employees for Environmental Responsibility. “But (it) acts as if it has an entitlement to the public’s lands.”

To get relief, ranchers were required to fill out applications reporting the size of their herds and verifying they were pastured in a county where the U.S. Drought Monitor declared that drought conditions prevail.