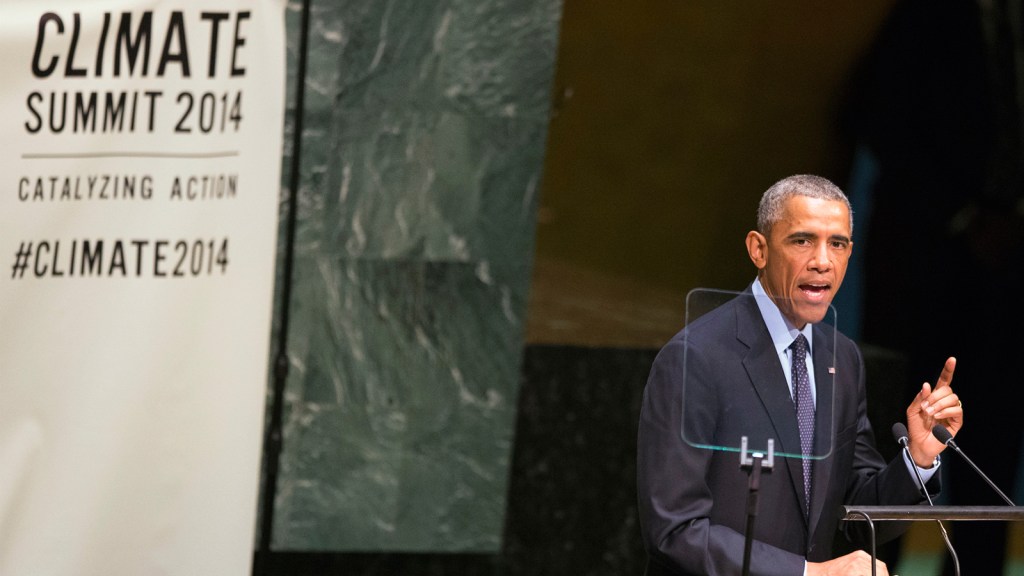 You’re probably familiar with the popular image of the United Nations, especially among American conservatives: an ineffectual bureaucracy where representatives of tiny countries drone on about their grievances while bored diplomats adjust their tie clips.

Well, sometimes conservatives aren’t totally wrong. The U.N. Climate Summit on Tuesday largely lived up to that reputation. A procession of heads of state spoke — so many that they had to be split into three simultaneous sessions — but even the largest session, in the General Assembly Hall, was largely empty during most of the speeches. The few delegates there seemed distracted, mostly talking to each other.

The speeches from heads of state and other representatives were billed grandly as “national action and ambition announcements.” Mostly, though, they consisted of familiar talking points, platitudes, and boasts about preexisting national energy policies. Early speakers in the main hall all exceeded their allotted four minutes, leaving the presiding officer, Sam Kutesa of Uganda, to plead ineffectively that they keep it short.

But seen through another lens, the event was a testament to the incredible urgency of climate change. A majority of the world’s heads of state took the time to address the conference even though no treaties or agreements were being negotiated there. The individual speeches may have been dull or meandering, but the collective message of the summit was sharp and clear: Climate change is already affecting countries all over the world, and developing countries are especially vulnerable. From the rising waves on the shores of the Marshall Islands in the South Pacific to the overflowing riverbanks of Bosnia, homes and businesses are being destroyed, and lives are being lost.

The Assembly Hall did perk up when President Obama spoke, filling up for the first time since the opening session featuring brief remarks from Al Gore and Leonardo DiCaprio.

The most heartening thing by far was that our president did assume the U.S.’s proper place as a leader in global climate negotiations. Obama was greeted by warm applause, and got the day’s only applause line during a speech, when he said, “Just a few minutes ago I met with Chinese Vice-Premier Zhang Gaoli, and reiterated my belief that as the two biggest emitters we have to lead. It’s what big nations have to do.”

Like most speakers, Obama highlighted how climate change is already affecting his country: “In America, the past decade has been the hottest on record. The city of Miami now regularly floods at high tide. In our West, wildfire season lasts most of the year. The alarm bells keep ringing.” And Obama nodded to Sunday’s People’s Climate March, saying, “Our citizens keep marching. We have to answer the call.”

Obama boasted of his administration’s progress on renewable energy, efficiency, and emissions. “We harness three times as much energy from the wind and 10 times as much from the sun as we did when I took office,” he noted, although he didn’t point out that U.S. renewable deployment was starting from a pitifully low level. He also bragged that his administration had increased direct aid for climate mitigation eightfold, and announced a new initiative to factor climate change into U.S. international development programs. But he did not join France and South Korea in pledging to donate to the U.N. Green Climate Fund to assist developing nations. (Germany had already pledged $1 billion.)

Obama’s conclusion demonstrated why it is essential that the EPA’s proposed power plant regulations take effect. He boasted that the U.S. will meet the commitment it made in Copenhagen in 2009 to reduce emissions 17 percent below 2005 levels by 2020, promised to issue a new target early next year, and called on “all major economies” to do the same. The U.S. needs to implement those EPA power plant rules to meet the 17 percent goal. And it needs to meet that goal to have any credibility in making its next pledge, and in demanding that other countries act too.

America’s president does not have the free hand that some of his counterparts do in negotiating international agreements. Several speakers during the summit said the emissions targets in any agreement reached at the U.N. climate conference in Paris next year must be binding. But Obama, leader of the world’s second-largest emitter, does not want such an agreement because treaties require ratification from the U.S. Senate and the Senate won’t do anything about climate change as long as Republicans hold enough seats to block action. Instead, Obama will press for the most ambitious accord that falls just short of a treaty.

What was particularly disheartening about the unrealistic — though understandable — insistence on a binding arrangement was that it was one of the only specific demands offered. Speakers were eager to talk about the need for action and the general principles of energy conservation and renewable energy, but they avoided mention of specific emissions targets or even precise amounts of funding they want from rich countries for climate-mitigation efforts.

The prime ministers of Barbados and Tuvalu called for limiting global warming to less than 1.5 degrees Celsius, but not for a set of emissions limits that would actually keep us from exceeding that low ceiling. (Average global temperatures are already 0.85 degrees above pre-industrial levels.)

The one notable exception was British Prime Minister David Cameron, who said he would go to Paris asking for reductions in global emissions of 40 percent by 2030. Perhaps more important than that ambitious figure is the fact that Cameron made it clear that he will stand with his country’s allies in Europe and the U.S. in pursuing a strong deal in Paris, rather than joining with his fellow center-right Anglophone governments in Canada and Australia that are planning to impede and undermine the negotiations.

Most individual speeches at the summit were abstract and technical, but some had moments that were striking in their eloquent fear or anger.

“I have always been infuriated by the shrinking ice caps on the peaks of Mount Kilimanjaro,” said Ugandan President Yoweri Museveni. “By 1906, 16 [peaks] had ice caps on top. Today only three have ice caps … [It is] an assault on the cultural heritage of the people of tropical Africa, and an assault also on the handiwork of God.”

“The people of Antigua and Barbuda, like other island nations, are angry,” said the country’s prime minister, Gaston Browne. “Despite their efforts to build a better life for their children, the devastating effects of climate change destroy their work and set them back, year after year. And they are acutely aware that climate change is not their doing.”

Said Prime Minister Perry Christie of the Bahamas, “Every day the sea is rising, the coral reef is dying, but all the world has done is talk.”

Others listed facts that were dry, but remarkable upon reflection: “The floods [of this spring] caused estimated damages and losses of up to 15 percent of GDP,” noted Bakir Izetbegović, the president of Bosnia and Herzegovina.

In the U.S., we tend to take it as a given that our Republican politicians refuse to accept climate science because to do so would threaten the future of fossil fuel production. But on Tuesday, even the heads of states highly dependent on oil revenues gave statements that readily accepted the reality of climate change and its causes. The Sultan of Brunei Hassanal Bolkiah spoke of the urgent need for action and highlighted his tiny country’s plans to reduce its energy consumption by more than half by 2035. Nicolás Maduro, the president of Venezuela, said, “Nature has been giving us clear signals of just how serious the situation is. This environmental crisis is the result of human action.” (Naturally, he went on to blame capitalism and the West.) Neither of them, though, mentioned the outsized contribution of their main exports.

Taken literally, the speeches would seem to reveal a contradiction: Every head of state says that rising global emissions are a terrible problem that threatens their country, and each brags about their own emission-reduction strategies. But if they’re all reducing emissions, how is it that they still rise? Few countries could point to actual gross emissions reductions, only efforts to hold them down. Costa Rica is building a rail system and a fleet of clean-burning buses, while Brazil said it is reducing deforestation and shifting to lower-carbon farming. What they both don’t say is how far they have left to go. (Brazil is also refusing to sign the U.N.’s deforestation declaration.)

To be sure, the summit was never supposed to be the opening round of negotiations for Paris. That process will kick off in Peru in December at the COP-20 climate meeting, and continue next March when countries offer their opening proposals for the parameters of a deal.

Still, what will happen in Paris in December 2015 was the central concern of most speakers. Prime Minister Enele Sopoaga of tiny Tuvalu, population 9,876, offered the most poetic and stirring conclusion. On behalf of his island nation, which faces drowning under rising seas if we continue on our current trajectory, he said: “We must recognize there are limits to what the Earth can sustain. … Let’s commit to an agreement in Paris that will save Tuvalu. For if we save Tuvalu, we will also save the world.”