Paris climate activities to be scaled back, even as official summit goes forward 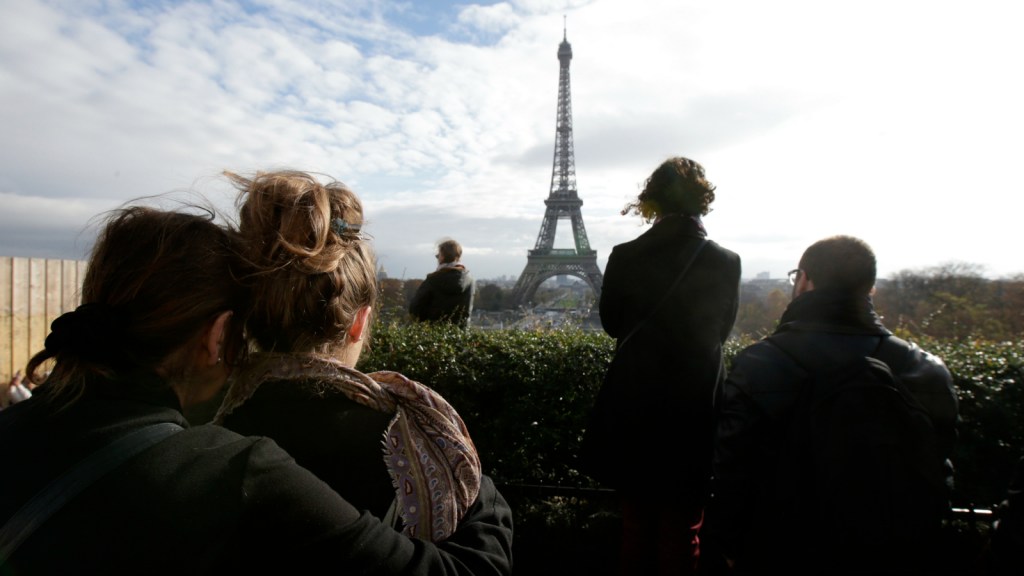 Paris climate activities to be scaled back, even as official summit goes forward

The horrific terrorist attacks in Paris came just two weeks before the city is due to host a landmark U.N. climate summit. That conference will go on, officials have confirmed, but many of the activities that were scheduled to coincide with it — from activist marches to side events — could be scaled back or cancelled. The climate confab in Paris will still be big, but not as big.

The White House announced that President Obama still intends to come to Paris for the opening two days of the conference, which kicks off on Nov. 30. About 120 heads of state are still expected to attend, plus as many as 60,000 others, including government representatives from 190 countries, members of the media, and climate activists.

“This is an absolutely necessary step in the battle against climate change and of course it will take place,” French Prime Minister Manuel Valls said on Monday. French Energy Minister Ségolène Royale said the conference is more important now than ever: “If not, terrorism wins,” she said. The head of the U.N. Framework Convention on Climate Change, Christiana Figueres, echoed that sentiment.

But Valls also said on Monday that “everything which was outside of the COP [climate talks], a whole series of concerts, of rather festive events, will be without a doubt cancelled.”

Friends of the Earth France, which has been planning peaceful “mass mobilizations” for the weekends before and after the conference, met on Saturday to discuss whether to alter plans, according to Politico. Activist groups and NGOs are also meeting today to decide which of their planned events and actions to change or cancel, Reuters reports:

A massive demonstration planned by environmental activists for the eve of this month’s UN climate summit in Paris is in doubt as organisers weigh the security risks, and the propriety, of gathering in huge numbers in a city where attacks killed more than 130 people.

Environmental groups will meet on Monday to decide a course of action, with mainstream activists saying they will abide by any ban on public gatherings if the state of emergency decreed by French President Francois Hollande is still in place.

Organisers from about 130 non-governmental organisations had hoped to draw 200,000 people to the march on 29 November, anticipating a carnival-like atmosphere that would pressure world leaders to take action to combat global warming.

Al Gore was in the midst of broadcasting a 24-hour-long “Live Earth” webcast from the Eiffel Tower when the attacks hit Paris on Friday night; he promptly cancelled the rest of the event.

For the U.N. summit itself and any side events that do happen, security will be tight. The Christian Science Monitor reports:

French authorities say they are using more than 30,000 members of the police force to put controls on 285 different border points across road, rail, sea, and air from now until two days after the conference ends, according to a report by the state-run Radio France Internationale. Agence France-Presse reports security forces will pay particular attention to extreme environmental groups and advocates with a history of violent protests.

Still, there may be a silver lining. Some observers think the talks might now have a little better chance of success, Politico reports:

“The [climate] talks won’t gain as much attention in the media because it will be crowded out by other issues. But that’s not what’s most important,” said Paul Bledsoe, a former climate aide in the Clinton White House. “The resolve of world leaders is going to be redoubled to gain an agreement and show that they can deliver for populations around the world. The likelihood for a successful agreement has only increased because of these attacks.”

Former U.S. climate diplomat Nigel Purvis, who now leads the consulting firm Climate Advisers, agreed. “Nations will be more likely to work closely with France to produce a constructive outcome,” he said in an email.

And as Politico’s Andrew Restuccia points out, “the gathering provides a new platform for President Barack Obama and other leaders to drive home an argument that they have been making for years: that climate change itself is a threat to the world’s peace and security.”