Louisiana’s coastline is shrinking into nothingness. The erection of levees and industrial ruination — not to mention subsidence and the fastest rate of rising sea levels in the world — have submerged vast chunks of land, with about 16 square miles now going underwater every year.

But in certain places dry land is increasing. And that fact has people wondering if they can at least partially reverse the deterioration of the coast in time for the extreme challenges of climate change.

Louisiana’s coastline, like any coastline, has always been subject to natural transformation. Following the Great Flood of 1927, however, engineers began constructing an immense system of levees and spillways to control the Mississippi River’s wrath. These structures prevented sediment from flowing downstream to the coast, where it used to clump up as new land.

The discovery of oil and natural gas shortly thereafter accelerated the region’s declining health. Explorers drilled some 50,000 wells and carved out more than 10,000 miles of canals, leaving a destructive impact some say accounts for 36 to 60 percent of the coast’s historical disappearance. In total, Louisiana is thought to have lost about 1,900 square miles of coast in the last eight decades — not great news for a state that depends on the wetlands as a buffer against hurricanes.

The staggering effects of humanity’s meddling is well-illustrated in this cartographic comparison from NOAA. Here was the area around Port Fourchon in 1932: 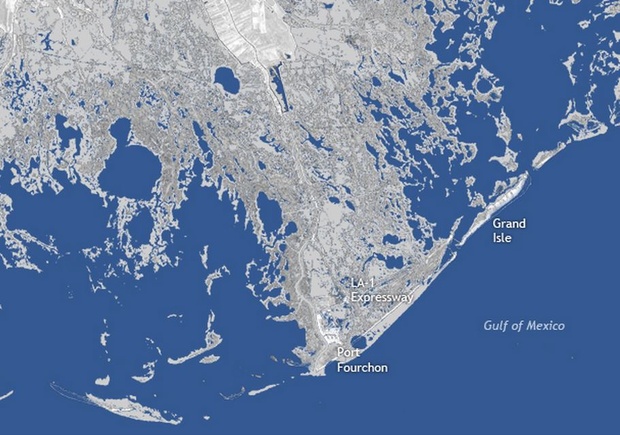 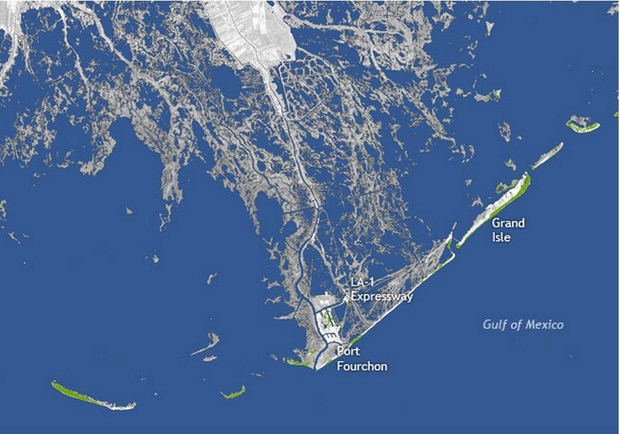 Note the green spots — this is new land that developed mainly from “coastal improvements such as shoreline revetments and enriched beach areas,” says NOAA. But this build-up is occurring in other areas due to artificial and natural causes. Take a look at this next comparison showing the mouths of the Wax Lake Outlet and the Atchafalaya River in the Atchafalaya Bay. The waterways had a fairly unobstructed exit in 1984: 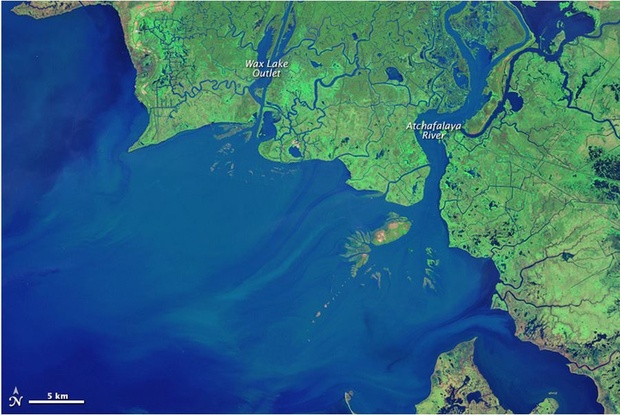 By 2014, though, they had acquired robust deltas of mud and sand: 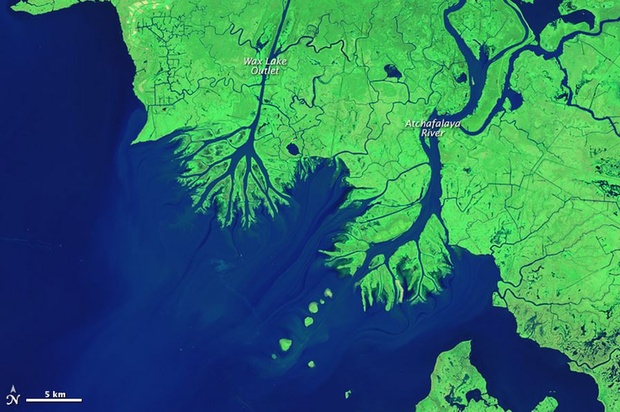 This delta complex is packing on ground at a rate of one square mile per year. So what’s happening? Well, unlike the narrow and leveed-up Mississippi — which speeds up water and sediment so fast it shoots deep into the bay — the Atchafalaya flows wide and slow. That allows debris to settle gently into the wetlands. Dredging and widening operations also add to the growth, shunting sediment downstream to create virginal land.

Scientists are quite interested in studying these processes, as they believe they might help counter today’s leading cause of coastal deterioration: rising sea levels. NASA explains more about what future engineering processes could look like:

With sea level rising rapidly due to natural geological processes, climate change, and human activities, predictions for the future of the Mississippi Delta are grim. Even the land gains in Atchafalaya Bay will do little to offset the losses elsewhere, according to geologists. Most scientists expect the Mississippi Delta Plain to lose roughly 5,000 square kilometers of land over the next 50 years.

“We are looking carefully at the Wax Lake and Atchafalaya deltas as models for building new land and preserving some of our coastal marshlands,” said Harry Roberts, director of the Coastal Studies Institute at LSU. “If we start diverting significant portions of the water and sediment from the main channel of the Mississippi River into adjacent wetlands, lakes, and bays — as happens now in Atchafalaya Bay — we’ll be taking an important first step toward saving a significant part of Louisiana’s coastal plain.”