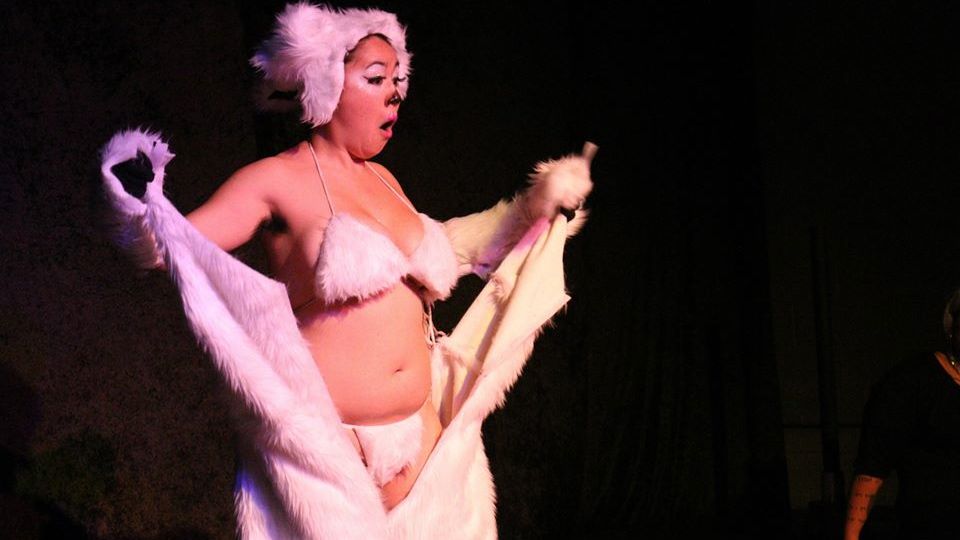 Una Aya Osato has been performing since she was 2 years old — she landed her first part after chatting up a casting director in a Chinese restaurant — and she’s been political for almost as long. As a New York City teenager involved in Reclaim the Streets, a social justice movement that transformed city blocks into dance parties, all she wanted for her 17th birthday was a bullhorn. But before she had a chance to really use it, she was arrested, for sound production without a permit.

That was how Osato met Miss AuroraBoobRealis, although not in that guise, yet. At the time, she was “this random lady who was dancing barefoot down Wall Street, who was very kind to me while we were in jail,” Osato says. They met again at the 2004 Republican National Convention. A few years later, they found themselves in the same theater group, and Miss Aurora invited Osato to the first show of a troupe she’d co-founded, Brown Girls Burlesque.

Burlesque, it turned out, brought together all the elements of performance that interested Osato — theater and dance and storytelling and politics. Particularly Brown Girls Burlesques’ style: sexy, yes, but smart, campy and feminist, too — the sort of burlesque that’s seen a revival in the past few years. She thought, “Oh, yeah, I could try that.”

As “the exHOTic other,” Osato began creating burlesque pieces on everything from gentrification to U.S. nationalism. Working with her sister Michi (who performs with Brown Girls Burlesque, too, as “sister selva”), she created burlesque and clowning acts that grappled with questions about the Earth, destruction, and human rights.

Osato’s newest, “PolarBare,” tackles one of the biggest issues of all: climate change. She performed it for the first time this past winter as part of a Brown Girls Burlesque show in New York.

Grist sat down with Osato recently to talk about Brown Girls Burlesque — which is currently raising money for its 2014 season — as well as clowns, consumption, and, of course, fuzzy arctic animals.

Q. So, what exactly happens in PolarBare?

A. It’s [set] to the song, “Winter Wonderland.” It starts with a polar bear who’s coming out of hibernation for the year. He’s a little bit disoriented, but he wakes up and sees this beautiful Arctic tundra that is his world. He says hello to world, and gets hungry.

But as he begins going hunting, he’s uncomfortably hot, and he’s distracted by that. He realizes he can take off a layer of fur, so he begins stripping. He goes back to hunting, but he’s so continually distracted. He keeps stripping because it’s so hot. He starts to get feverish chills, and has to keep stripping down and stripping down to pasties.

He eventually catches a fish, but it’s toxic. And he eats it and dies.

So it’s about pushing the comfort zone where it’s sexy, and then — oooh, it’s sad. OK, nevermind. Not sexy.

That’s one of my favorite things about burlesque — playing with the audiences’ expectations and flipping the script on them. To me, that’s what’s exciting about burlesque. It’s this medium where there’s a history of political commentary. It’s right for it. To think about what we want to say with our bodies, about our bodies — to not do that is such a missed opportunity. And it’s so fun, too.

I was involved in organizing for so many years and protest politics — which in America are lacking flamboyance and fun. It can’t just all be knocking our heads against the wall. Fighting for a more just world, we have to be having fun while we do it. That to me is what clowning is, it’s what burlesque is: It’s bringing the fun back into it all. They don’t need to be separate from each other.

Q. You also did this piece with your family about natural and human-made disasters. How’d you develop that?

A. We had started training in clown and when we created this clown show, a lot of big “natural” disasters had been happening — the earthquake in Japan and Fukushima. And we felt like clowns are these amazing beings that don’t have fear the way that we do. They can explore emotion and huge things, and they’re not afraid to fail. That’s part of being a clown. We brought in a director, who I’ve worked with for years, and he began working with all of us to think about these big things, like consumption of food. If some of the world gets to eat all the food and the rest doesn’t, how would a clown explore that?

So we have a piece in the show where we look at that through balloon consumption. There’s this one clown who gets served all the balloons and is so excited to eat them all. And the other clown is just given one and doesn’t have anything. The first clown wants pictures taken of it with these balloons everywhere and doesn’t even know what do with all the balloons, and the other one is withering away because it doesn’t have any balloons. So it’s showing inequality in a fun, playful way, but at the heart of it is [she pulls a sad clown face] reality.

Q. You have all these different creative angles. What does burlesque give you that other modes don’t?

A. What’s cool about being in burlesque and in a burlesque troupe is that there are these very specific parameters — you have to make a piece to one song and tell a story in three to five minutes. And at the same time, because of the way the medium works, there’s an element of humor, and in order to keep the audience there with me, when I’m doing something as vulnerable as sharing my body, it forces me to have to play with whatever story I’m telling.

I don’t care what [my audience] left thinking about, but that they left thinking — that the next time they hear that song, they will continue to think of that stripped-down polar bear. It won’t be a winter wonderland.