She studies underwater methane-eating microbes that keep our planet in balance. Genius! 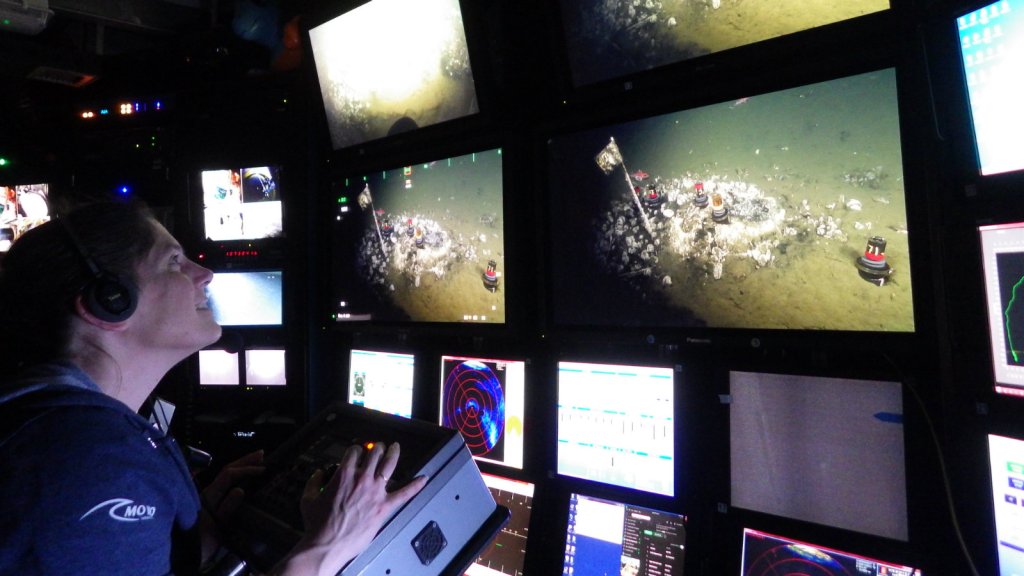 She studies underwater methane-eating microbes that keep our planet in balance. Genius!

Thousands of feet below the sea, in deposits crowded around the edges of the continents, there is more methane than you can imagine.

Seriously — whatever you are imagining, triple it. You’re getting close. Triple it again. There could be more methane in the ocean than all other fossil fuels on the planet. Some is held in deep, underwater reservoirs of oil and gas, but the majority of the methane is believed to be stored in a kind of slushy, fizzy ice called a “methane hydrate.”

“We actually don’t have a very good quantitative understanding of how much hydrate is out there,” says biologist Victoria Orphan, a long-time explorer of one of the last great unknown places on Earth. “Very little of the deep sea has been studied by scientists — probably less than 1 or 2 percent of all the seafloor.”

Last week, Orphan was named a MacArthur Fellow, winning her a $625,000 “genuis” grant and drawing new attention to her field of study: the methane-gobbling microbes that play a key role in regulating our planet’s atmosphere.

Orphan has spent her career zeroing in on deep, dark reserves of methane at the ocean bottom. These icy hydrates melt in higher temperatures or lower pressures, freeing methane to bubble up to the atmosphere. But for the most part, this doesn’t happen as much as we might expect — and microbes get the credit.

Although methane acts as a powerful greenhouse gas in the atmosphere, underwater it is an unlikely source of energy for thriving microbial communities that feast on the gas seeping out of hydrates and reservoirs. They break down the methane molecule into CO2 — some of which turns into solid limestone slabs that pave the seafloor — and food to support a thriving deep-sea ecosystem: dense clam beds, giant red-lipsticked tube worms, fuzzy snails, and other alien creatures, all staged on massive yellow-and-white microbial mats like so much shag carpeting.

“You have this amazing ecosystem engineering that’s going on, driven by these microorganisms taking a gas and turning it into a solid on the seafloor,” says Orphan. “You really create these productive oases in the deep sea, and it’s all starting from methane.”

Taking a gas and turning it into a solid is one of those ideas beloved of geoengineering proponents: a way to reclaim CO2 from the atmosphere, or at least scrub it from the emissions of power plants. One successful experiment in Iceland is doing just this — but the process is tricky and expensive, not yet reliable enough to make a dent in our carbon footprint.

Orphan’s underwater microbes, on the other hand, already play a role in the climate we live in today.

“It turns out that these microorganisms are very effective — as much as 80 percent of the methane that could potentially be released from the seafloor is consumed before it gets into the overlying waters and up into the atmosphere,” Orphan points out. “It’s a globally important process.”

Microbial environmental engineering is older than climate change — it’s the foundation of life on Earth. About a billion years ago, bacteria started chewing through Earth’s carbon-dioxide-heavy atmosphere, turning it into the breathable oxygen-rich air we enjoy today. It was our planet’s first foray into photosynthesis as we know it, and it produced a veritable explosion of lifeforms that led to the complex, many-branched ecosystems we have today.

At the base of it all, still, are microbes.

“There’s been tons and tons of press and interest in the human microbiome,” Orphan says, referring to a rash of recent studies and news stories that zero in on the role microbes play in our health, even in our identity. People are starting to view microorganisms not as germs but as invisible forces working to our benefit.

It’s important to realize just how big that benefit might be to the environment. Oil and gas companies are looking into the possibility of mining methane hydrates from the seafloor — remember how there are more of those than all other oil and gas reserves on Earth? — just as soon as they can do so cheaply enough to turn a profit. But in doing so, they risk messing up an ecosystem we know almost nothing about.

“I feel like we are at a crossroads that may be not too dissimilar to deforestation in the rainforest at one point,” Orphan says. “There was a lot of clear-cutting that happened, and then this recognition that maybe these ecosystems are playing a much greater good, and we should preserve them. It’s not as simple as just planting some new trees.”

Nor is it simple to understand the role that methane hydrates could play in climate change without further study. “There are critical knowledge gaps that we need to fill before we start decimating the seafloor for industrial purposes,” Orphan says. “It’s very hard to come up with predictive models without understanding this fundamental information.”

So Orphan will keep chipping away at the vast unknown of the deep sea. “Every single time we’ve gone out,” Orphan says, “we’ve discovered a new animal that was not known to science.” That’s more than enough reason to keep looking.