When an expected record-breaking 36 million Americans take their holiday road trips this Fourth of July weekend, they’ll be part of what is quickly becoming our nation’s biggest source of carbon dioxide emissions — transportation.

This winter, for the first time since 1979, carbon dioxide emissions from cars, trucks, and SUVs surpassed the carbon pollution from electric power plants, which have been America’s chief climate polluter for more than 35 years, U.S. Energy Information Administration data released this week show.

“The major significance is it shows that decarbonization is about more than just the power sector,” said Sam Ori, executive director of the Energy Policy Institute at the University of Chicago.

In both February and March, the transportation sector’s annual carbon dioxide emissions added up to more than the emissions from electric power plants (when calculated using a rolling 12-month total).

Cheaper gasoline is the primary reason for the increase in emissions as Americans are driving a lot more than they used to. For the moment, that offsets increasing vehicle fuel efficiency. 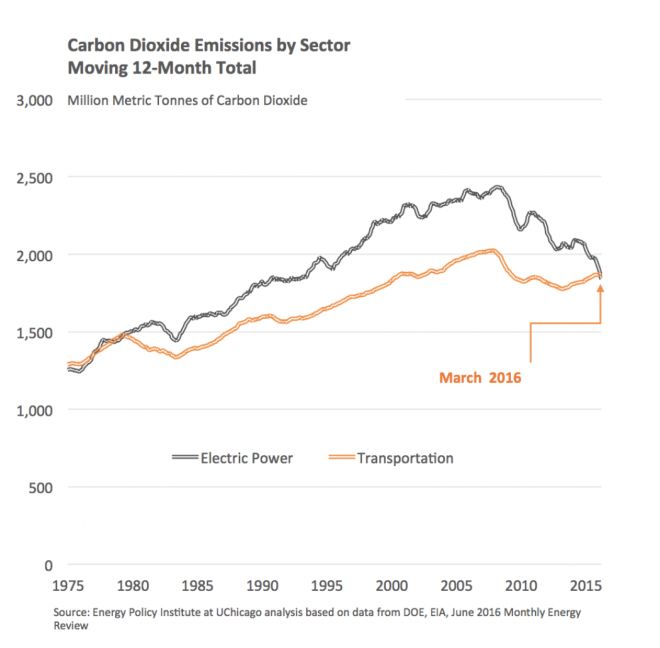 At the same time, power plants are getting greener and cleaner. Their emissions have been falling for more than six years as the fracking boom, cheap natural gas prices, federal mercury pollution regulations, and the prospect of having to comply with climate change rules such as the Clean Power Plan have encouraged utilities to shutter coal-fired power plants.

Cleaner-burning natural gas power plants and wind and solar farms are replacing those that run on coal, and today, natural gas, which emits about half the carbon as coal, is becoming America’s chief source of electricity.

Consumer transportation choices — the kinds of cars people choose to drive and the road trips they choose to take when gasoline prices fall — are among the biggest reasons transportation is becoming America’s biggest climate change problem, Ori said.

“Miles driven on U.S. highways grew by the second-fastest rate in 40 years last year and will probably match that rate this year,” Ori said.

With gasoline averaging $2.31 per gallon of regular unleaded — 47 cents less than a year ago, according to AAA— Americans are driving more than ever before. Ori’s analysis of EIA data shows that Americans drive an average of about 8.7 billion miles per day, up from about 8.1 billion in 2011 and 6.8 billion in 1997.

The 2008 recession stopped growth of vehicle miles traveled in its tracks, but those miles started growing quickly in 2013 and 2014 as the economy improved and crude oil prices collapsed. This weekend, AAA expects the highest-ever Fourth of July travel volume — 36 million people — on the highways, mainly because of cheap gasoline.

Cheap gasoline has made it easier for people to ditch electric vehicles and fuel-efficient cars and buy larger, less efficient vehicles instead. 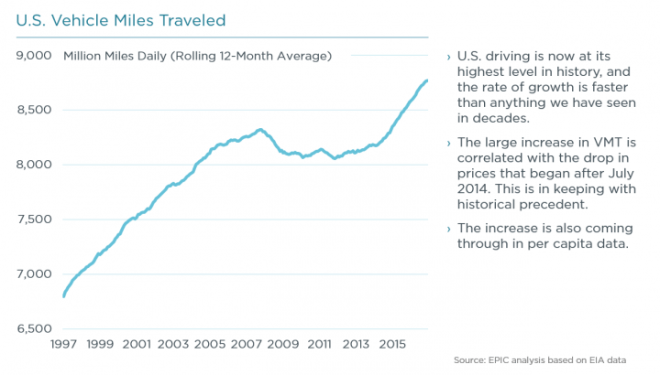 “As oil and gasoline prices fell, U.S. consumers piled into SUVs and pickup trucks at record levels,” Ori said. “Those kinds of light trucks now account for about 60 percent of the U.S. market, up from around 50 percent in 2013.”

All vehicles are becoming more efficient, but larger vehicles will always be less efficient than smaller ones, so the more people drive larger vehicles, the more pollution they’ll emit, said Daniel Sperling, a civil engineering professor at the Institute of Transportation Studies at the University of California-Davis.

The trend toward higher transportation emissions shows that to address climate change, the government needs to both boost fuel efficiency standards and think beyond them by developing new fuels and technology that would reduce carbon emissions from vehicle tailpipes, said John DeCicco, a research professor at the University of Michigan Energy Institute.

“In terms of how people think about climate change, there is a need for much greater awareness of the significance of transportation as well as better education about consumer choices,” he said.

It has always been easier to slash emissions from power plants than from cars and trucks because regulating power plants doesn’t require consumers to change their lifestyle choices, said Timothy Johnson, an energy and environment professor at Duke University.

For vehicle emissions to be drop, it will have to become more expensive for people to drive, Johnson said.

“Transportation costs are a reasonably small share of average household spending (less than 20 percent) for people in the middle class and above, and people seem to tolerate a certain amount of time spent commuting,” he said. “Transportation choices and behavior are not likely to change unless either of these factors increases appreciably.”