The dried-up Aral Sea is now a post-apocalyptic playground 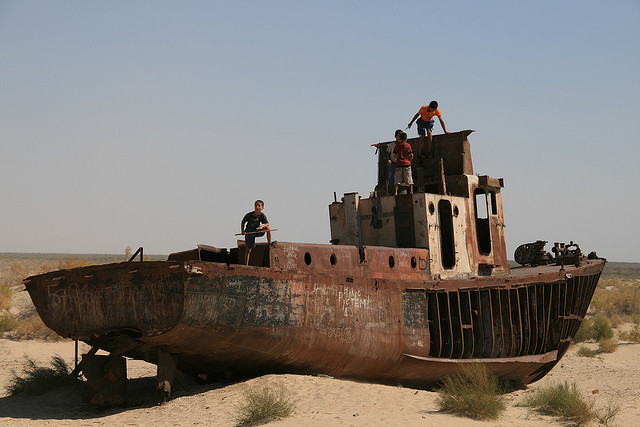 The dried-up Aral Sea is now a post-apocalyptic playground

This week, NASA released a collection of satellite images that give us a vantage point on how much the Aral Sea has shrunk in the last 14 years. Clue: a whole lot.

The lake, once the fourth-largest in the world, has been zapped dry over the course of a few decades, mostly due to lack of rainfall coupled with an ill-advised Soviet-era project that diverted rivers away from the basin. Since the project’s instigation, the sea has shrunk into what could now be described as a liquid pocket of agri-chemical waste.

In a bid to drive up production of cotton in nearby steppes, Soviet engineers diverted the Amu Darya and the Syr Darya, the two rivers flowing into the lake, as part of massive irrigation projects for water-hungry crops in the 1950s and ’60s. As a result, the bed of the lake – polluted by the chemicals used in crop-growing – has become exposed, while the water has turned increasingly salty, killing off the majority of wildlife, and decimating the fishing industry in the region.

The good news is that if you’re a child in southwestern Kazakhstan or northern Uzbekistan, you have access to a creepy, apocalyptic playground that your parents never did. The dry wasteland where the Aral Sea once teemed with fish is now scattered with abandoned cargo vessels and derelict ship wreckage. And boy, are they fun for a game of hide-and-go-seek.