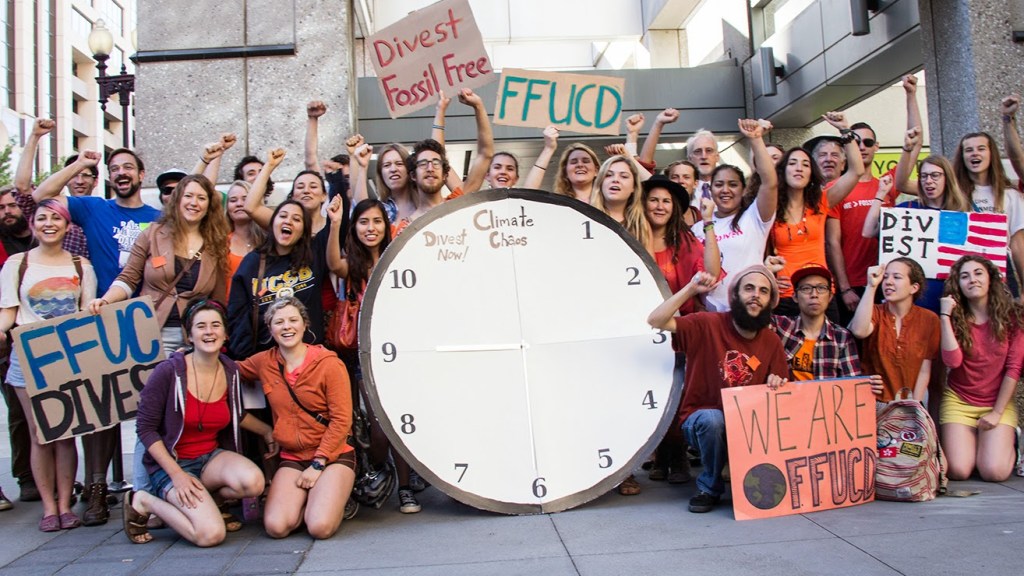 Environmentalists are celebrating after the University of California announced Wednesday that it had dumped $200 million worth of holdings in coal and tar sands from its massive investment fund.

Jagdeep Singh Bachher, the UC system’s chief investment officer, says the decision to sell off investments in some of the world’s dirtiest energy sources was based largely on economic considerations. Bachher cited huge declines in the coal industry and falling global oil prices, according to Reuters. Bachher added that “slowing global demand, an increasingly unfavorable regulatory environment, and a high threat of substitution pose insurmountable challenges to coal mining companies,” and that he worried about “sustainability issues” that are making oil-sands investments risky, according to the Los Angeles Times.

Despite the announcement, there has been no official change in UC’s investment strategies, a university spokesperson told Reuters. That means the UC has no plans to get rid of their investments in other fossil fuels — natural gas and conventional oil — anytime soon.

Nonetheless, the news was immediately embraced by environmentalists as a big win for the divestment movement, a global campaign led by the group 350.org that is pushing major institutions to distance themselves — and their finances — from industries contributing to climate change.

“This is the first time that they are committing to do it, so it is massive — it is the largest university commitment pulling out of fossil fuels in the history of the campaign,” says Karthik Ganapathy, a 350.org spokesperson. UC has only divested from specific sectors three times before: from South African companies during apartheid, from businesses associated with the genocide in Darfur, and from tobacco companies. The school system has resisted fossil fuels divestment for years, despite ongoing student protests.

In reality, this sell-off represents a mere fraction of UC’s overall portfolio, which is valued at more than $98 billion, and it’s unclear whether it was related at all to the ongoing protests to get the university to divest. Klein told the LA Times that UC still has about $10 billion in energy industry investments, and has no plans to sell off any more.

As part of the divestment campaign, 350.org has teamed up with student groups on campuses who are taking a stand against their universities’ investment practices. Fossil Free UC, organized by students, faculty, and alumni of the UC system, has been involved since 2012. Over the past three years, student demonstrations have caused university officials to reevaluate how they were doing business, students say, and the group is now claiming some vindication.

“Students put this debate on the table,” said Avi Oved, a UCLA student who currently serves on the UC Board of Regents. The 22-year-old, who plays a role decision-making on the board, says Fossil Free UC paved the way for divestment discussions to take place.

After protests last year, UC set up a task force to investigate its investments. Though the board ultimately decided not to divest at that point, it did develop environmental, social, and governance standards that included issues like climate change, human rights, and ethics. These standards, Oved claims, helped lead to Wednesday’s announcement to ditch the coal and tar-sands investments.

“These holdings were reducing in profitability, they were higher risk, and it made sense economically — as well as in the context of social responsibility — to sell them,” Oved said. “Now they are looking at the implications of carbon pricing on their holdings, and they are looking at conservation questions — even things like not investing in the gun industry.”

“There are no so many different degrees that they are taking under consideration, which were completely ignored in the past,” Oved added.

While the activists see Wednesday’s decision as a victory, they aren’t standing down. Jake Soiffer, a UC Berkeley junior who has been involved in Fossil Free UC since he first arrived on campus, says he plans to keep fighting the university’s investment practices.

“They have divested from coal and from oil sands, but the major players profiting off of environmental destruction in California are oil and natural gas. They haven’t done anything about those,” Soiffer said. “We need to be using the institutions we have access to as a platform for climate justice, and calling out the way a system has been set up to keep power in the hands of a few … and highlight how those few are wrecking our planet.”