These biologists created a gorgeous film about African glaciers 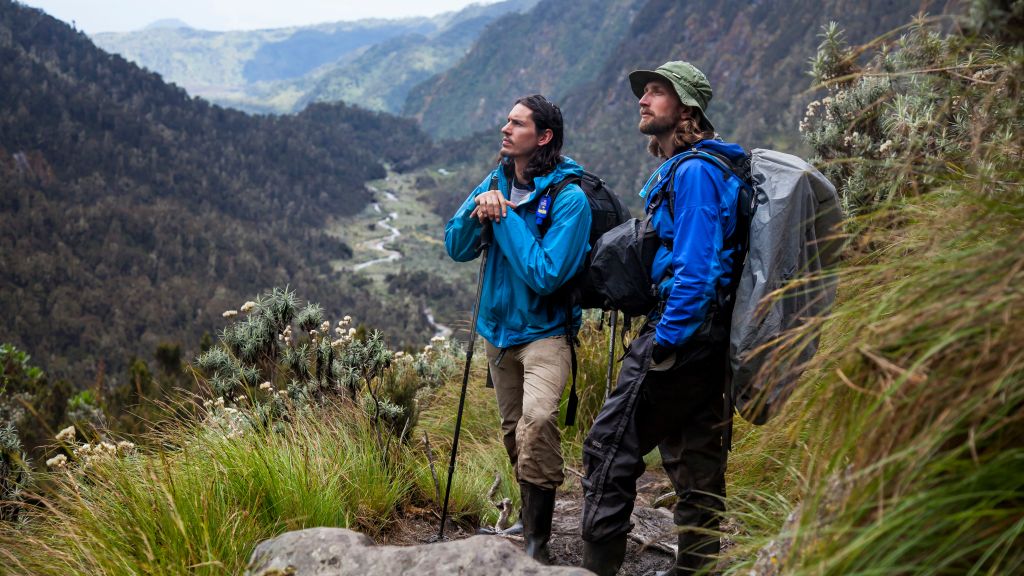 These biologists created a gorgeous film about African glaciers

Chasing Ice launched a new sub-genre of horror films: Watch big beautiful glaciers melt. OK, that might not sound as date-night friendly as a slasher flick, but, hey, if a kid talking to a wagging finger named Tony can be scary, watching the Arctic melt away is downright terrifying. Filmmakers Neil Losin and Nathan Dappen recently joined the field with Snows of the Nile, a visually stunning documentary about the disappearing glaciers in Uganda’s Rwenzori Mountains (you can watch the trailer here).

Losin and Dappen brought a twist to their ice-gazing short by focusing on glaciers where you might not expect them: the tropics. The emerging filmmakers, who both have PhDs in biology and star in the film, got some financial help from a Dos Equis promotion. Snows follows their journey to the Rwenzori, with prints of its glaciers from a 1906 expedition in hand. And yes, as compared to the original photos, the glaciers have changed. A lot.

Grist interviewed Losin and Dappen about their respective transitions from young science students to photographers to documentarians — and on beer’s starring role.

Losin: I was a fan of [Dos Equis’] page because I loved The Most Interesting Man in the World campaign. And one day this thing about the “Stay Thirsty” grant came across my Facebook feed, and I thought “wow, I could really use that $25,000 — what could we pitch that would cost that much to do.”

Dappen: We already had this idea of documenting tropical glaciers that are disappearing, since not a lot of attention is given to them. Neil started doing research on the topic and he found the Rwenzori Mountains. And then he discovered there was this expedition there in 1906 that photographed the glaciers. We came up with the idea to replicate the photographs.

Losin: It turned out when all was said and done, the Rwenzori idea could cost about as much as the Dos Equis grant — or at least enough to get us there so we could get the footage to tell the story.

Losin: When I was 8 years old, my grandmother gave me an old bird book and a pair of binoculars that she got at a garage sale. And I was just like immediately hooked. I knew from that point forward that I wanted to do science in some way.

Dappen: Growing up, I didn’t know that I wanted to be a scientist. But my mom was an agricultural economist working mostly in the third world, and my dad was a doctor and a big adventurer. So I spent a lot of time traveling in kind of exotic locations, like in the new world tropics and in Africa.

Losin: My passion for photography also started out with birds, but there’s sort of a barrier to entry for equipment costs to photograph birds because you need enormous, expensive lenses. But ultimately I was able to invest the money into getting a big telephoto lens, and my bird photographs were like the first images that I actually sold into magazines and books.

Dappen: I started taking photos in high school — I was really interested in art. I worked a lot in black and white. And then I got a job working in a photo studio and started shooting weddings and stuff like that. During my biology PhD, I still did a lot of that on the side, just because pay is not very high in grad school.

Dappen: We met when we were both in grad school, on an eight-week intensive field biology course for graduate students. We both quickly realized that we had a lot in common and became close friends. We talked a lot about science and photography and communication. At that point in time I think both of us thought we’d go into academia and research, but over the next few years we continued to meet up and go on adventures and talk about using our images to communicate science. And it sort of just evolved to the point where we said, “Hey, maybe we could do more with our sort of visual storytelling skill set in science than by actually doing research.”

On telling the story of climate change:

Losin: We really wanted to make Snows of the Nile more experiential than just beating people over the head with the same messages over and over again. So we framed it in terms of us going on a quest to recapture the images from the 1906 expedition, and the conflicts we have fighting against the weather and fighting against the clock, because we didn’t have a lot of time in the mountains to get what we came for. I also think it’s important to see climate change not just in terms of shrinking glaciers, but also in terms of what that’s going to do to human inhabitants. I think the people from the Bakonjo tribe who helped with our trip were such a great embodiment of the human impacts of climate change in the Rwenzori Mountains. To see the surprise in their eyes when we showed them the prints from 1906 — they knew stories of what it used to be like from their great-grandparents, but most of them had never seen images of it before.

Dappen: Both Neil and I are really big into equipment. When the new camera gear comes out, we’re always excited about buying it, you know?

And, finally, on dealing with green guilt:

Dappen: I try to set certain guidelines of how to live and what to buy, but for me it’s not the end of the world. I think everybody just has to change in small ways.

Losin: There comes a point where it can be your entire life trying to have a lower impact. And I think it’s because there isn’t necessarily an infrastructure to make life easier for people to consume in a way that doesn’t release enormous amounts of CO2. And that’s why I don’t think it should be on every individual’s shoulders — there are things that every individual can do and should do, because it really doesn’t place any undue burden on you, but the most important things might be if we can advocate politically, because then we can make it easier for everyone to live greener. Once we have a certain kind of infrastructure in place, then it doesn’t have to take your entire day to go out of the way and do these things. They become a lot more natural.