If Philippe Squarzoni knows one thing, it’s that a book can’t change the world. When the French graphic novelist — whose work tackles such hard-hitting topics as the Zapatista movement in Mexico and homicide rates in Baltimore — decided to put together a 500-page tome on climate change, he did so, he says, not out of any kind of activist agenda, but because “je ne pouvais pas ne pas le faire” — “I couldn’t not do it.”

He never thought it would alter the trajectory of things, change anyone’s mind, or make people care. Nope: He claims it was simply because the problem was so vast and so all-encompassing. The more he learned about it, the bigger and scarier it got, and he just couldn’t to put it down.

“It’s climate change that chose me,” he says. “I didn’t choose anything.”

Climate Changed: A Personal Journey Through the Science was published this spring in the U.S. The original French title translates as “Brown Season,” which refers to that lifeless, muddy interval between winter and spring, and, as Squarzoni told OnEarth Magazine, “I feel like humankind is in a similar state of transition.”

The hefty illustrated primer is a sort of memoir, tracing Squarzoni’s own process as he learns about climate science and politics. Along the way, he weaves in personal moments with his life partner, his dog, his travels, and his favorite movies. He explains and depicts everything from atmospheric science to the Intergovernmental Panel on Climate Change, from climate disasters to renewable energies, adding in his own reflections and ruminations about it all. Squarzoni is interested in political discourse, but he’s not taking sides. He’s not an environmentalist or a scientist or a policy advocate.

“I present myself very modestly to my readers,” he says. “These questions are new to me, but they’re not new questions — the environmental movement has been asking them for 40 or 50 years. I think that if this book works for the reader, though, it’s precisely because I’m in this position: I myself am discovering things.” 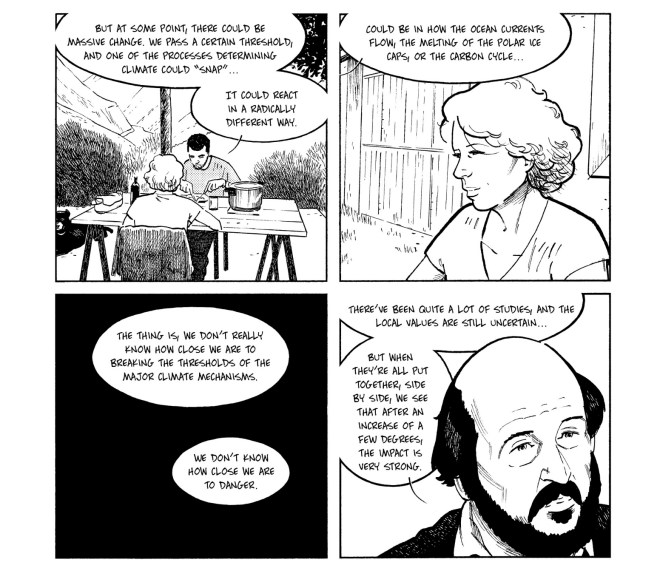 The book is thoughtful and ponderous, dense and poetic, and approaches climate change from the perspective of someone who cares, and is afraid and angry, but who, like all of us, can’t possibly care and be afraid and be angry every single minute of his life. It won l’Academie Francaise’s 2012 Leon de Rosen prize, an environmental award given to a book or essay; this is Squarzoni’s first book to be translated and published in the United States.

I chatted with Squarzoni about his motivation for the project, his current views on climate change and political will, and his very, very faint glimmer of hope for our future. Below is a translated and edited version of what he had to say:

So, why climate change?

Well, I would have loved not to have done this book, I would love for this problem not to exist. I discovered it while working on my previous book, which was a retrospective on what [former French president] Jacques Chirac had done during his time in office. In the process of trying to assess his administration’s environmental action — or rather, lack of action — I realized that when it came to climate change, I had a very superficial understanding. I knew next to nothing. And I started to do a little research, and when I started to realize the nature of the problem and its gravity, I realized that I couldn’t do it justice in a few pages; it was an enormous problem that touched every aspect of our lives. And that gave birth to the book. Almost in spite of me, really. 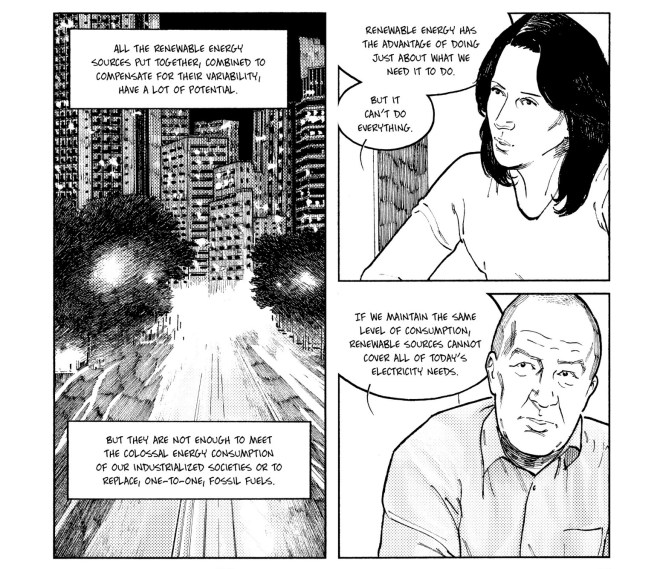 It’s a tough topic. You spent six years working on it. Was it hard to keep going?

There were difficult moments. There were moments when I was so saturated with negative information. And I’m like everyone: There are moments when you’re working and you don’t have your mind on your work. You’ve got to do all these pages on global warming but you don’t have your mind on global warming. You have other personal problems, other worries. There are days when global warming keeps me from sleeping. And there are days when I want nothing to do with it.

It’s what I tried to say in the book: The problem with global warming is that you simply can’t be afraid all your life.

I put myself in the shoes of the climate scientists who work every day on this stuff, and I say to myself, “Those people have to learn about all this bad news, and after dozens of years to see that nothing has changed… I wonder how they do it!” Every day they learn that emissions are increasing, that the situation is getting more and more complicated, and worse than we thought, because the projections about the consequences of global warming are getting more precise, to the point where there isn’t any more doubt, but… what is going to change?

But at least for you… ? Did this process change anything in your own life?

Everyone wants to know that, because everyone wants to know what they can do about this — what they can change in their daily lives. And there really isn’t anything I do differently except that I almost never take airplanes anymore. There’s not a lot that one can do. In my life, anyway, there isn’t much to change. I don’t have a driver’s license, I don’t have a car, I work at home. The are certain dilemmas I can avoid. But if I had to drive to work, I’m sure after writing this book I would have started taking public transportation. 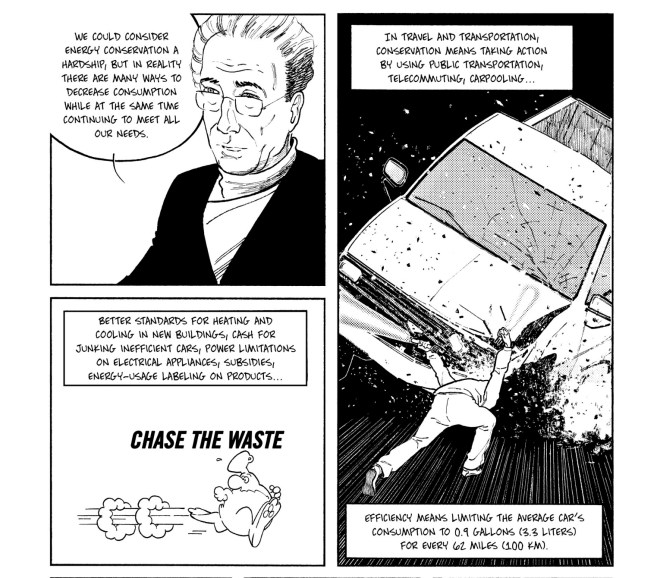 What changed for me really is that I realized to what extent this theme is absent from political discourse. When I think about big political questions, I know that I have to add in questions about the climate, but it’s enormously absent in France right now. It’s a topic that has totally disappeared because of the subprime mortgage crisis, because of the public debt crisis, because of the European financial crisis, et cetera. People only talk about boosting economic growth. And then the old-school drivers of the economy are the ones polluting and creating global warming! Converting our energy systems, reducing energy consumption… Those are words you never hear, never, never.

When Al Gore’s film came out, when the 4th report of the Intergovernmental Panel on Climate Change came out, people were talking a lot about the climate; now, it’s a topic that’s pretty much disappeared from public discussion. And I’m terrified.

Publishing a book is talking about it, at least a little bit, right? You don’t think that makes any difference in the global conversation?

I’ve never seen that happen! The arts are a reflection of the culture of an era and if we are discussing global warming, then the artists are going to investigate that, too. And there will be films, and there will be books, and there will be comic books. But I don’t think that a film on its own, a book on its own, is going to change things. Al Gore’s film is unfortunately proof of that. People were talking so much about him! A lot of people saw it. In France it was screened at the National Assembly, in front of deputies, who the next day told the press, “I didn’t know things were so bad.” And then, three days later, everything went back to its place, and the [economic] machine started turning the wrong direction all over again. So, no, I don’t think that a book or a film on its own can change things. But it’s not to change things that I did this book. 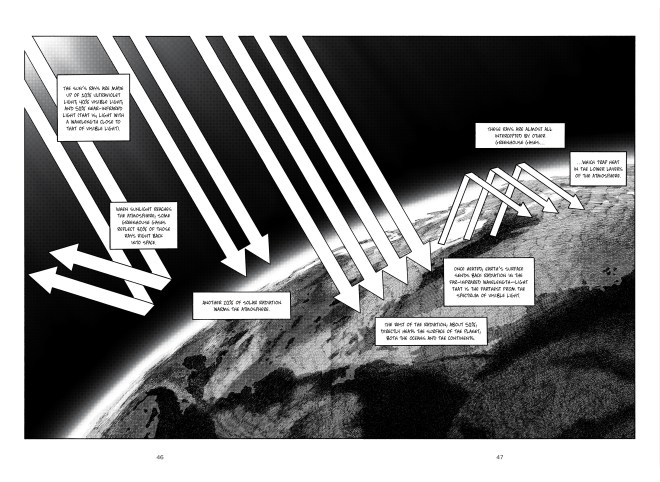 OK, OK. But isn’t there any kind of hope here? Please tell me that all this research gave you a little something to hold on to.

One surprise for me is that although the wall we’ve got to climb is very, very high, we can still climb this wall. The caricature of the environmental movement is like, “Oh, you want to go back to candles, you want to stop using cars,” et cetera. But we’re wasting so much energy that we could basically be at our same standards of living, we could reduce our energy consumption without it having a huge impact on us. (Well, in the U.S., you’d probably have to change a lot of things because the energy consumption is really incredible there…) But in France, we can, without reverting to the Middle Ages, just by using more efficient systems, by paying attention, we can in fact reduce our levels of energy consumption to levels that would work for the climate.  The bad news is that we’d need to bring in so many more liberal politicians that it’s very unlikely that we’d put them in place in the time we’ve got left… before things start becoming very complicated.