When carbon dioxide emissions from power plants and cars rise into the atmosphere, they don’t always stay there. While the majority of these emissions hang around to create the greenhouse effect that causes global warming, up to 35 percent of human-made carbon falls into the ocean. When that happens, the pH level of the ocean drops, causing a phenomenon known as ocean acidification. Some scientists call this the “evil twin” of climate change.

Over the last century, the oceans have become about 30 percent more acidic, a faster rate of change than at anytime in the last 300 million years. That’s really bad news for any sea creatures that live in hard shells (shellfish) or have bony exoskeletons (i.e., crabs and lobsters), and for coral. Fish larvae and plankton can also be affected. And since many of these organisms are food for bigger fish and mammals, ocean acidification puts the whole marine ecosystem at risk.

Of course, humans depend on these critters as well, especially in coastal communities whose economies are deeply tied to the fishing industry. In the last few years, the threat to oyster harvests in the Pacific Northwest has been well documented. But every bit of the U.S. coastline bears some level of risk, according to a new report in Nature. The study offers the first comprehensive projection of which parts of the U.S. coast will be worst off, and when ocean acidification could reach dangerous levels there.

Julia Ekstrom, a climate adaptation researcher at the University of California-Davis, combed through existing scientific literature for three key types of data: How ocean acidification is projected to change in different regions over the next century; how dependent individual local economies are on the shellfish harvest (the study focused only on bivalves like oysters — other critters could be the subject of future research); and social factors that could help communities adapt, like pollution controls (runoff from rivers can also affect local pH) or the availability of other jobs. That data, combined, led to the map below.

Purple indicates the time at which ocean acidification is expected to become serious enough to significantly affect shellfish (darker is sooner); red indicates how vulnerable a region would be to a drop-off in shellfish productivity. So Washington, for example, could see the impacts soon but is relatively well-prepared to handle them. Impacts to the Gulf Coast are expected much further in the future but could be more economically severe. 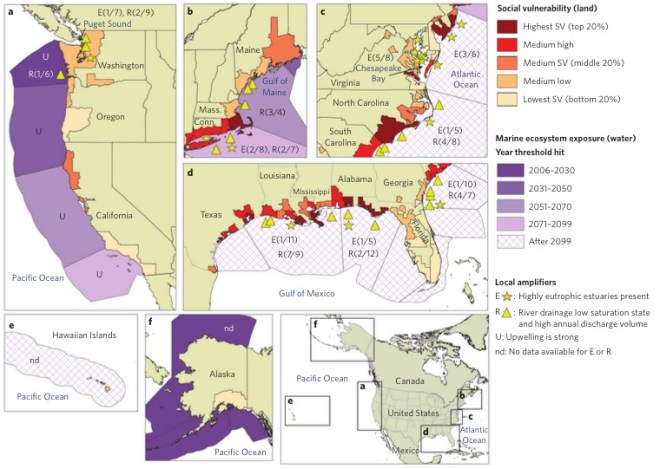 The good news is that many of what could be the hardest-hit communities still have time to prepare. Then again, the outlook could be worse in some places (Maine, for example) if you conducted similar research on lobsters and other vital fisheries. Ekstrom said localized predictions like this are key to enabling communities to prepare and can also help scientists decide where to focus efforts to monitor and track acidification as it progresses.