The world’s first “clean coal” plant — that is, the first full-size coal-fired power plant ever to capture and store the majority of its CO2 emissions — is located in, of all places, Saskatchewan. (They should change the name to “Of All Places, Saskatchewan.”) According to the first financial analysis done on the project, it appears to be functioning primarily as a public subsidy to the province’s aging oil industry.

This takes a little explanation. First some quick background on the project.

The Boundary Dam Power Station, located just north of the North Dakota border, is the province’s oldest and largest coal-fired power plant. Its first boiler was commissioned in 1959. Boilers have been added and decommissioned over the years; there are now six, four of which are active. It is owned and run by SaskPower, the province’s principal utility. (A vertically integrated monopoly utility, for those keeping score at home.)

In 2008, the provincial government announced the Boundary Dam CCS project, whereby one of the station’s boilers (No. 3) would be replaced with a modern 160-megawatt boiler and coupled with a facility that would capture and store up to 90 percent of the boiler’s CO2 emissions. Seven years later, in 2014, boiler No. 3 began operations, representing the world’s first full-scale coal CCS project.

The captured carbon dioxide is compressed into liquid form and transported via pipeline. Most of it goes northwest to the aging Weyburn oil field, privately owned by Alberta-based Cenovus Energy, where it is used in “enhanced oil recovery” (EOR), boosting oil production. 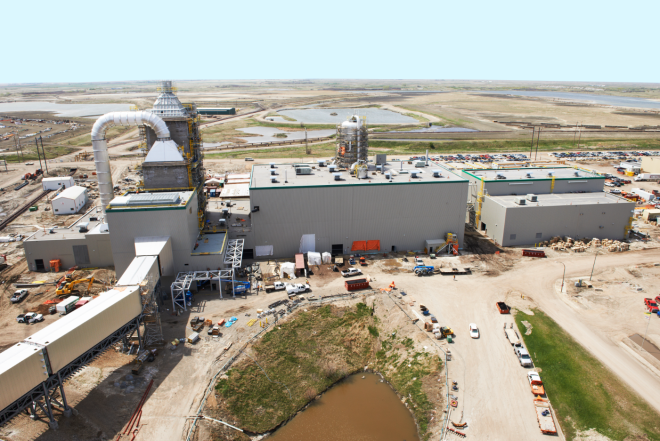 The same facility that strips carbon dioxide from the boiler’s flue gas also captures sulfur dioxide (which it condenses into sulfuric acid to sell for industrial use) and scrubs out NOx. Fly ash from coal combustion is also captured and sold for industrial use. It’s about as good as you can get for a coal plant, environmentally speaking.

Anyhow. In the run-up to its opening, the project got a lot of press — The New York Times, The Financial Times, The Economist, etc. — but most of it was based on what the plant was expected to do, according to SaskPower.

A few days ago, the first financial analysis of the plant’s actual operations was released. It is not flattering.

Just to be up front: The report is written by a wind guy, James Glennie. He’s got long experience as a financial analyst in the energy industry, MBA, CFA, all that, but he is involved in trying to get wind projects off the ground in Saskatchewan. Just so you know. That said, the report is exhaustively detailed and referenced, and I do mean exhaustively, so do jump in if you’re suspicious of my summary. And as Glennie says, “Critics of our conclusions might well ask themselves why, given the sizeable spend of public funds on this initiative, the proponents have not already shared their own detailed project justifications.”

Here are some numbers from Glennie’s report. (All dollar figures are expressed in net-present-value terms, and in Canadian dollars.)

The project — heretofore known as BD3CCS, for Boundary Dam Boiler No. 3 Carbon Capture and Sequestration — was initially forecast to cost $1.2 billion but ended up costing $1.47 billion. Of that, the Canadian federal government contributed $240 million. The remaining $1.23 billion was paid by SaskPower customers. Of the total, the new boiler cost $550 million and the CCS facility cost $917 million.

Over the 30-year life of the plant, in terms of cash flow, the boiler itself nets out at a $391 million profit — that’s total revenue from power sold minus the initial investment and operation and maintenance costs.

Over the same 30 years, the neighboring CCS facility will generate $713 million in revenue from the sale of CO2 and sulfuric acid. If you then subtract the initial investment, operation and maintenance costs, and the costs of “parasitic load” (the electricity required to run the CCS facility, which is almost 25 percent of the power plant’s output), the CCS facility nets out at a $1,042 million loss. Note that even if capital costs were zero, the CCS facility would still generate negative Earnings Before Interest Taxes, Depreciation and Amortization (EBITDA).

Subtract that $391 million profit from the boiler from the $1,042 million loss from the CCS facility and you get a $651 million net financial loss for SaskPower customers from BD3CCS.

In other news, SaskPower recently asked regulators for a 5 percent bump in rates in 2015 and another 5 percent in 2016. And they got it.

Now, here are some interesting numbers for the Weyburn Consortium (headed by Cenovus Energy), which owns the Weyburn oil field.

Over the 30-year life of BD3CCS, the consortium will invest $2,025 million in their EOR project. They will incur $1,313 in operation and maintenance costs, pay $690 million for CO2 from BD3CCS, and pay $900 million in royalties to the Saskatchewan government. On the other side of the ledger, they will make $6,750 million in revenue from crude oil sales.

That nets out to a $1,823 million profit. Pretty sweet deal! Especially since the consortium’s current contract for CO2, from North Dakota, expires this year. And especially since EOR is the only thing keeping Weyburn going — and is expected to keep it going for 30 more years. 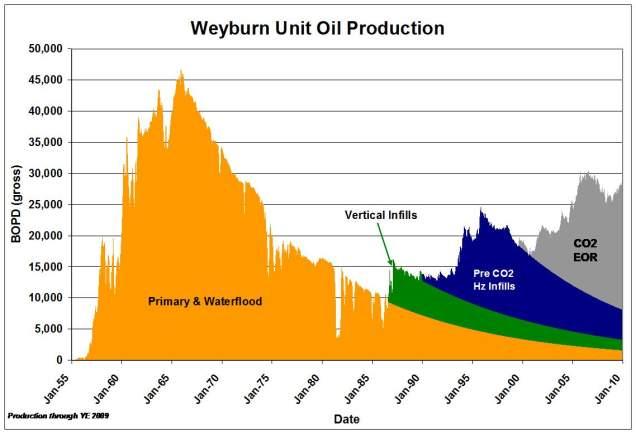 How about the CO2? SaskPower has not released any actual performance numbers, so here are Glennie’s estimates based on various public sources of information:

SaskPower boasts that BD3CCS represents the equivalent of “taking 250,000 cars off the road.” What it fails to note is that SaskPower put the cars on the road in the first place (er, metaphorically). It is solving, or almost solving, a problem that it is creating.

Why not build a power plant that doesn’t put any of those metaphorical cars on the road in the first place? Then you wouldn’t have to charge customers a billion dollars to remove them those cars. Why not, say, wind power?

There’s a whole section of the report devoted to that. It’s extensive, but in a nutshell: over the same 30-year time frame, SaskPower could produce the same 757 gigawatt-hours of clean electricity with wind power at a capital cost of $450 million. That’s about a billion dollars less than BD3CCS — a billion in direct savings for SaskPower customers. “Since operating wind turbines emit no CO2,” Glennie notes, “they would achieve this at a cost of $0/tonne of avoided CO2.”

But despite its plentiful wind resource — it’s a plains province — Saskatchewan gets just 3 percent of its electricity from wind, next to last among Canadian provinces: 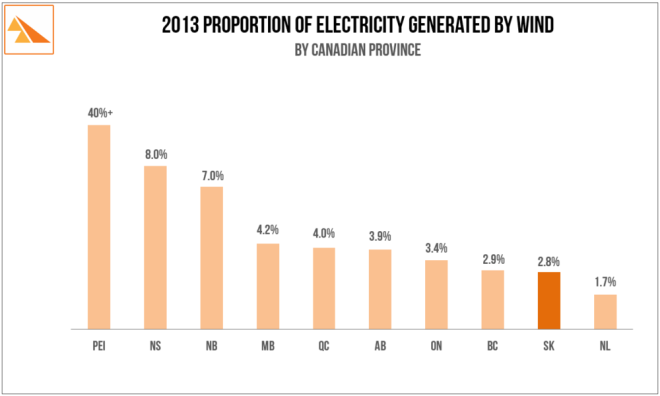 That represents virtually no progress over the last decade: 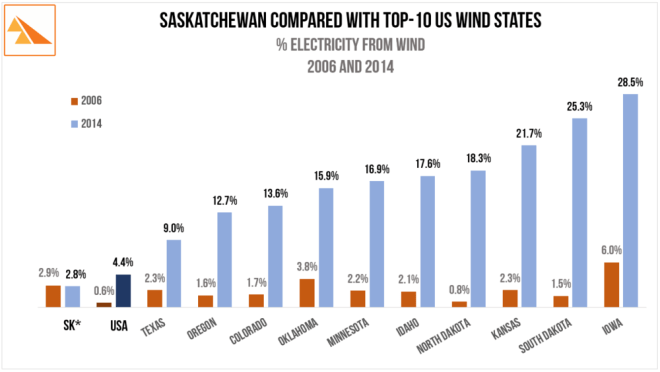 And that helps explain why Saskatchewan has the highest power-sector carbon emissions of any Canadian province: 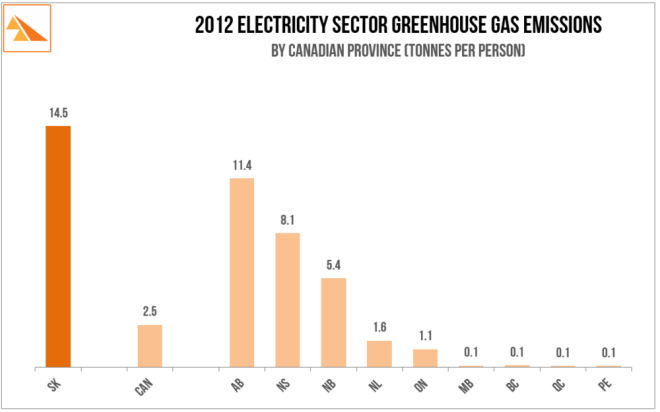 Yet still, the SaskPower guys are fixated on continuing to burn coal.

So, to summarize: The utility gets to keep its coal plants running, cling to its old, familiar centralized-power model, and raise rates. The province’s coal producers get to keep producing coal. The province’s oil producers get to keep their aging oil field running and, as a bonus, receive an almost $2 billion subsidy from SaskPower customers over 30 years. The Saskatchewan government receives almost a billion in oil royalties.

Everybody wins! Except electricity customers in Saskatchewan. They get fleeced.

So why build this project at all, or the next two, BD4CCS and BD5CCS, which SaskPower is now contemplating? The noble headline is that Saskatchewan wants to selflessly help pioneer a technology that many people think will be crucial to deep carbon reductions.

The more plausible story begins with the fact that the Canadian federal government passed some seriously strict anti-coal regulations a few years ago:

Under the new rules, companies will not be able to commence construction of a new coal-fired power plant after July 1, 2015, unless it is equipped with carbon-capture and storage (CCS) technology that would bring greenhouse gas emissions (GHG) down to a level of high-efficiency gas plants.

Companies would also have to close plants built before 1975 by the year 2020, and any plant built after 1975 would have to close by 2030, unless equipped with CCS.

That means unless SaskPower outfits the boilers of the Boundary Dam station with CCS, they have to shut down by 2020. Stranded assets — utilities no likey. Saskatchewan has large coal reserves and the folks at SaskPower are keen to burn them. Like every vertically integrated monopoly utility, it has long been sheltered from competition, so it’s not exactly a bastion of cutting-edge thinking.

And on that note, Glennie concludes his report with some recommendations for power sector reform in Saskatchewan, basically a form of restructuring in which the utility would retain monopoly control over the grid and customer care, but power generation would become a competitive market overseen by an government agency (an ISO, or independent system operator).

That would be a great start. If Saskatchewan really wanted utility reform, it could even be even more ambitious. But Glennie’s probably right that as long as the current model persists, the old thinking that accrued around it will persist and coal will get burned no matter the cost.

I know some CCS backers view this as an acceptable cost. The first one’s got to be built somewhere and the next CCS facility will, it’s true, be cheaper. But those who bear the cost should do so knowingly, through transparent democratic choice and coherent climate policy. There’s no sense dumping the costs in, of all places, Saskatchewan.