People are not happy with American Airlines. A quick perusal of Yelp shows an overall rating of 1.5 out of 5 stars, with vastly more negative reviews than positive. There are frequent complaints of lost luggage, overbooked flights, and terrible customer service. “Worst airline ever” seems to be the most common sentiment — although Delta, United, Frontier, Spirit, etc. all give American a run for its money on that front.

In one respect, however, American outshines the competition: gas guzzling.

A new report from the International Council on Clean Transportation shows that American was the least fuel-efficient major air carrier in 2014 — a full 25 percent less efficient than Alaska Airlines, the most efficient airline. Virgin America and Delta were almost as bad as American. 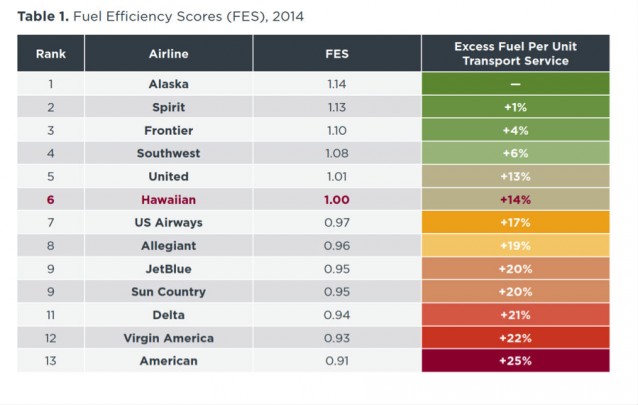 The 2014 airline ranking might be helpful for travelers interested in reducing their carbon footprint — or in getting the best deal. Fuel efficiency was tied to profitability, and in today’s world of competitive flight pricing, profitability means airlines can lower the cost passed on to consumers. Airlines, too, are interested in decreasing the amount of jet fuel they use on trip. Fuel is a significant portion of airlines’ costs, and decreases in emissions were tied in part to newer fleets, as the industry tries to push fuel costs down. …

Unfortunately, that efficiency comes at a different cost — one to your kneecaps. The biggest driver in fuel reductions from 2013 to 2014 was tied to a 1.6 percent increase in “seating density,” according to the report. That means airlines are packing people more closely together. Maybe Airbus is on to something — the company filed a patent this past summer for a design to stack airline seats.

And yet, the most efficient airline is also one of the most popular: Alaskan’s overall Yelp rating is a stunning 3.5 stars — almost unheard of in air travel.

Other ways to improve efficiency and reduce emissions include mechanical improvements, using biofuels or other alternative fuels, or implementing a carbon fee, but some have argued that ticket prices would be an effective way of driving demand down. Research published last year in Atmospheric Environment suggested that the only way airline carbon emissions could be reduced overall, given the expected increase in demand for flights, would be to raise ticket prices.

Say it ain’t so! Until the U.S. invests in high-speed rail (har har), we’re probably not going to give up air travel anytime soon — but it comes with a steep environmental price. Air travel is one of the worst things most of us do for the climate (unless, that is, you are a Koch brother) — and annual emissions from flights are on par with annual emissions from the entire country of Germany. It’s bad. Real bad.

And even worse if you’re flying American. But if horrible fuel efficiency isn’t enough to make you take your business elsewhere, maybe this Yelp review will be:

Gather round the campfire my friends… Let me tell you give you a rundown of why you should NEVER settle for this absolutely shitty airline. I flew with American Airlines all day today and I’m still astounded at how awful they are… The one star is for the fact that they had seat belts and oxygen.