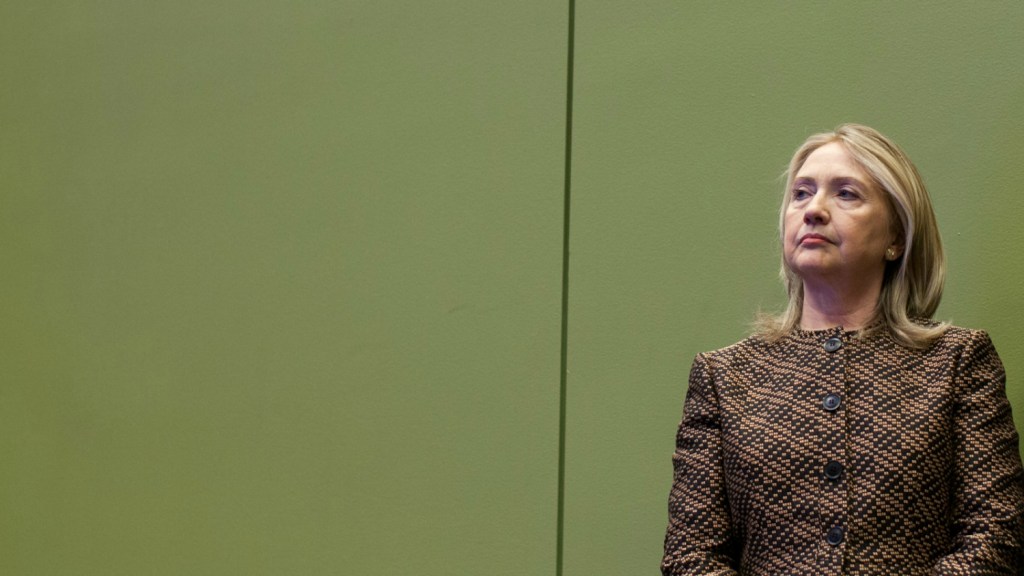 The Nation magazine and 350 Action are challenging presidential candidates to “neither solicit nor accept campaign contributions” from fossil fuel companies — and that’s putting the heat on Hillary Clinton in particular.

“Back in the 1990s, politicians on both sides of the aisle swore off campaign contributions from big tobacco because the industry lied to the American people about the damage it was causing to public health,” writes 350 Action spokesperson Jamie Henn in an email. Oil, coal, and gas companies, Henn continues, “have consistently misled the public about the dangers associated with their product, and this time it’s the whole planet that’s at stake. You can’t be serious about addressing climate change and still accept checks from ExxonMobil.”

Fossil fuel companies, of course, exercise quite a bit of influence over politics through their ability to lob money into campaigns. Though coal companies’ profits have been suffering, oil companies are going strong, and both still put a lot of money into politics. The oil and gas industry poured $76 million into federal campaigns in 2012, according to the Center for Responsive Politics. Of the amount that was donated to individual candidates’ campaigns, 89 percent went to Republicans and 11 percent to Democrats. The coal mining industry gave another $15 million in 2012, and most of the candidates it supported were Republicans too.

So The Nation’s editors issued a challenge to candidates in an editorial yesterday:

To break the carbon barons’ grip over America’s response to this crisis, The Nation calls upon all 2016 presidential and congressional candidates to make and honor the following pledge: In the name of protecting our country and the world from the growing dangers of climate change, I will neither solicit nor accept campaign contributions from any oil, gas, or coal company.

It’s an interesting experiment, and how candidates choose to respond to it says a lot about their priorities. “Some candidates for president are already signing up,” writes Henn, “and we expect more to do so as campaigns like divestment continue to stigmatize the fossil fuel industry.”

Democrat Bernie Sanders and the Green Party’s Jill Stein have said they’re in — they’ll take the pledge. Former Maryland governor Martin O’Malley and former Rhode Island governor and U.S. senator Lincoln Chafee — also both running as Democrats — “said they supported strong climate action but would not sign the pledge,” write the magazine’s editors in the editorial. [UPDATE, 7/7/15: O’Malley now tells The Nation that he will take the pledge.] Nation Executive Editor Richard Kim told Grist that they’re reaching out to Jim Webb, former senator from Virginia, who jumped into the race as a Democrat last week.

On the other side, not one of the 14 Republican candidates The Nation contacted has responded to the challenge. All but one of the Republicans deny that human-made climate change is a real threat that should be taken seriously by our next president. The one outlier, Sen. Lindsey Graham (S.C.), has said he’s in favor of addressing “climate change [and] CO2 emissions in a business-friendly way,” but he’s a long-shot candidate. And, well, it honestly doesn’t seem too likely that Republicans, whose party has embraced the “money is speech”-type decisions from the Supreme Court that paved the way for the current explosion in campaign spending, would say no on principle to money from a big industry — especially when the donor industry in question so clearly favors Republicans over their Democratic opponents.

That puts the pressure from The Nation and 350 Action’s challenge on Hillary Clinton.

Clinton, who has yet to respond to the challenge, has acknowledged that climate change is a potent threat. Were she to win, she’d be following another Democratic president who, at least on the demand side of things, has pushed to green America’s energy economy, and who has worked internationally to encourage other large polluting countries to do the same. Climate change is an issue she’ll have to engage with continually through the election cycle, and oil and coal companies’ objectives are, presumably, at odds with those of a candidate who has called for “decisive” action to “head off the most catastrophic consequences” of climate change.

So will Clinton heed this latest effort to push her to the left? Her campaign has started to see Sanders as a real threat, and it’s attempting to emulate his campaign by courting small donors. Choosing to turn down money from companies with a vested interest in stopping climate action is one easy way Clinton could show her commitment to the liberal base.

The Nation and 350 Action plan to keep up the pressure, on Clinton and the other candidates who haven’t pledged yet. “After all, candidates can change their minds,” the Nation editors write, “especially when enough public pressure is brought to bear.”