You can't ignore the smog in China 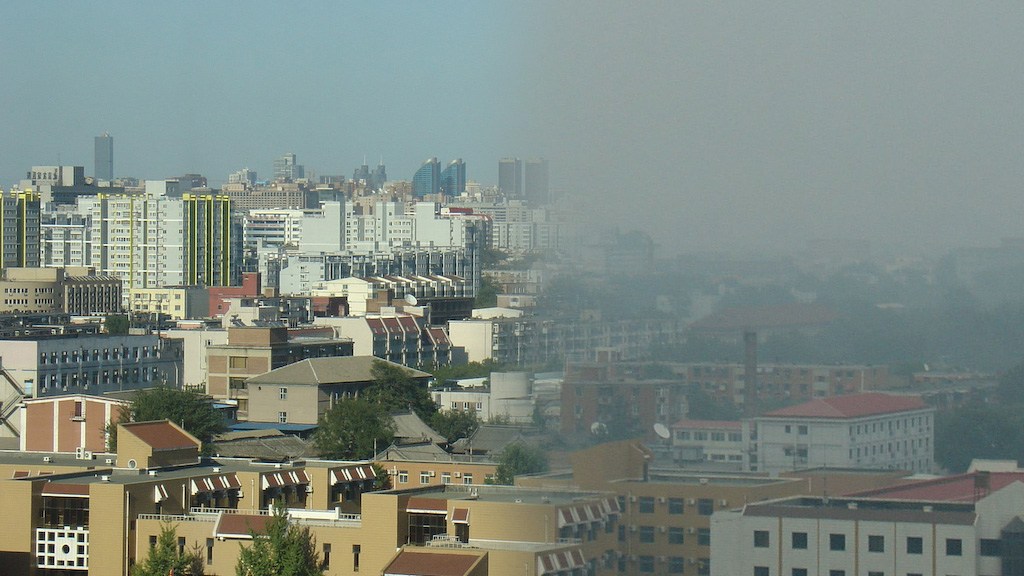 You can’t ignore the smog in China

China is a notoriously difficult country for outsiders to get a handle on, but two things are immediately obvious the second you exit the airport. One, that the country is undergoing an unprecedented level of economic growth. Two, the country is in the midst of an ecological catastrophe. You literally breathe in both of them.

Despite all I had read before going to China last month, I was a bit blasé about Beijing’s famous smog. I’ve lived in cities all my life and once spent a few months in Moscow — a place not exactly known for its pristine air quality. Surely, for a three-day visit, it couldn’t be that bad.

Unfortunately, my trip — a journalism fellowship sponsored by the East-West Center and the Better Hong Kong Foundation — happened to coincide with one of China’s worst smog episodes of the year: a giant cloud over most of China visible from space. Distances became difficult to judge, and the city’s famous downtown glowered menacingly out of the haze. On the ground in Beijing, conditions were what the U.S. embassy classified as “hazardous,” meaning: “Everyone should avoid all physical activity outdoors; people with heart or lung disease, older adults, and children should remain indoors and keep activity levels low.”

Thankfully, most of my agenda involved conversations with officials in climate-controlled offices, but whenever we were outside — or riding a minibus though the capital’s bumper-to-bumper traffic — the cloud would hit like a wall, drying my throat and making my eyes water. A slight lingering cold that I brought with me from Washington soon turned into a full hacking cough. It felt less like any urban environment I had ever been in than earlier this summer when I was a few miles away from massive forest fires in Idaho.

Beijingers, or foreigners who’ve spent significant amounts of time in the city, will undoubtedly think I’m just soft. Judging by the elderly women practicing tai chi the city parks and Lycra-clad yuppies out jogging — seriously — locals don’t seem too fazed anymore. But evidence suggests pollution is one factor making it difficult to attract international talent to the city. What’s worse, prolonged exposure to smog at this level — particularly among children — can have lifelong medical effects. The World Health Organization has classified air pollution as a leading cause of cancer.

The Chinese government appears to be taking the problem seriously. The number of coal plants under construction has tapered off — though 363 are still being built — and they are being moved farther from major cities. Following recent outbreaks of pollution, air quality monitoring systems have been put in place, and the central government has begun to name and shame the cities with the worst air quality.

Another striking thing about the smog is that compared to some of China’s other problems, it’s very easy to talk about. The government officials we spoke with on our tour, including representatives from the foreign and commerce ministries, generally reverted to boilerplate when asked about controversial topics such as the country’s military buildup, human rights record, or trade disputes with the United States. But we happily chatted about the smog the way people in other countries talk about the weather. For more than 24 hours after an apparent terrorist attack just a few blocks from our hotel, it was nearly impossible to legally read any coverage of it from the Western media in China, yet the state-controlled news agency Xinhua maintains a full web vertical about smog, including stories about such downer topics as rising lung cancer rates in Beijing. Baidu, the massive search engine that serves as China’s equivalent of Google, openly admits that it filters politically sensitive content at the request of the Chinese government, but if you search for the day’s smog levels, it automatically directs you to the numbers provided by the U.S. Embassy in Beijing, widely considered more reliable than the government’s own figures.

Unlike ethnic unrest in far-off provinces or official corruption, the smog can’t exactly be ignored or censored.

The fact that the smog is so obvious makes it easy to write about, in contrast with other issues in a country that doesn’t exactly make itself easy to report on. A number of articles, including a recent National Journal cover story, have used the smog as a metaphor for all that’s wrong with China, a sign that despite the record-breaking growth, the Communist Party is not fully in control of the country’s destiny.

This is a bit unfair because, as China’s defenders frequently point out, this isn’t the first time the world has seen pollution like this. It’s an almost inevitable byproduct of rapid industrial growth. Thick smog was a fact of life in London from the Industrial Revolution though the early 20th century. It reached its nadir with the great smog of 1952, when the smoke was so thick that the city was entirely shut down and 4,000 people were killed. Both Mexico City and Los Angeles saw horrifically bad smog in the 1970s and 1980s, comparable to what we see in Beijing and other Chinese cities today. All these cities have managed to clean up their air significantly.

This take goes a little too easy on China. Given the lessons from the rest of the world, the air needn’t have gotten this bad. More efficient and cleaner power generation methods, even coal plants, have been available for some time now. China should have predicted this problem and moved to fix it sooner. But it doesn’t seem like a stretch to believe that if China continues to develop, it can get the smog problem under control.

Focusing on smog — a relatively easy-to-solve problem — lets China a bit off the hook for the much larger issue at stake: the country’s CO2 emissions. China overtook the United States as the world’s largest total contributor to climate change in 2007, and it’s quite possible that the country could take steps to reduce the visible smog in its cities while that gap continues to widen. In fact, according to one recent analysis by the World Resources Institute, China’s smog reduction plan could actually increase its emissions by moving to synthetic natural gas converted from coal, which burns cleaner than coal but produces more CO2 overall. Tackling CO2 is going to be a much more difficult problem, and a much harder one to reconcile with the country’s desire to maintain its breakneck pace of economic development.

On the night before our last day in Beijing, a heavy rain fell, and by morning we were greeted with mercifully blue skies. A city that had looked dingy and almost dystopian the day before revealed itself — despite the traffic, which never takes a break — as a surprisingly attractive place, with abundant green space, bustling street life, and innovative modern architecture. Aside from the obvious impacts on the country’s health and environment, one big reason why China ought to take the smog issue seriously is that it’s a lot easier to feel optimistic about the place when you can actually see it.