Does life start when a sperm high-fives an egg, or do they have to make out? Who cares? Climate change is WAY more fun to argue about! At least according to a new poll by the Carsey Institute, reports Climate Progress:

Survey researcher Lawrence Hamilton polled 568 New Hampshire residents and found that Democrats and Republicans disagree most on climate change — more so than on abortion, gun control, the death penalty, or evolution.

Here’s the divide on climate change: 83 percent of Dems know we’re contributing to climate change, but only 23 percent of Tea Partiers acknowledge that. The thing is, it’s climate SCIENCE. It’s not really something that’ll change based on the opinion of Gramps McGolfcourse. (Which is good, because he also thinks your hair is too long.) 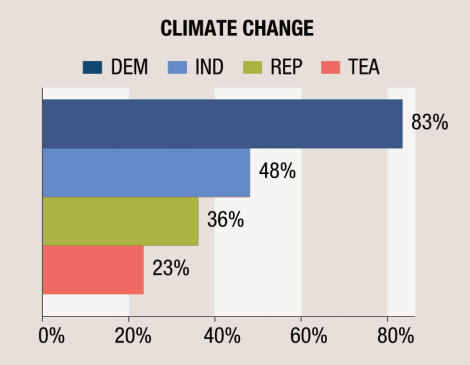 Carsey Institute at the University of New Hampshire

Who knew that the unmentionable family dinner trifecta of sex, religion, and politics would one day replace “nipple piercings” with “carbon dioxide”? After Obama, climate change is responsible for the biggest percentage-point disagreement between Democrats and Republicans: 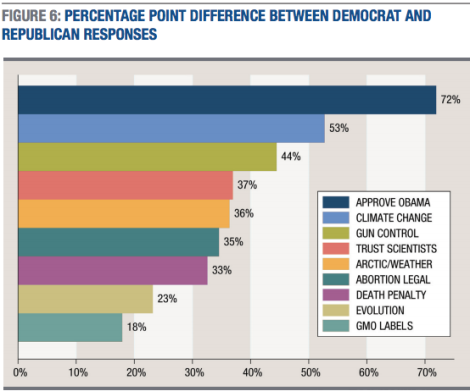 Carsey Institute at the University of New Hampshire

So go ahead, dish about a woman’s right to choose while you serve up Thanksgiving turkey! And turn up the NPR. Because the beans may be cooling off, but the planet isn’t.

How African Americans beat one of the most racist institutions: The swimming pool