In 1930s New Orleans, when the city began draining swamps around Lake Pontchartrain to create the whites-only Pontchartrain Beach, African Americans naturally protested because there were few other places for them to legally and safely bathe and swim. The city considered giving blacks a beach in a tiny portion of the lakeshore called Seabrook, where the Industrial Canal spills into the lake — along with all of the pollution you would guess is carried in a canal built for industrial purposes. But white homeowners didn’t want to grant even this filthy area to black kids.

The Edgewood Improvement Association, a white homeowners group, complained that the mere presence of black swimmers would depress property values. (It didn’t occur to them that draining the swamps for their fake beachfront would do more destruction to their property than black kids swimming — something we learned in 2005, when levee breaches not far from Seabrook led to the tragic flooding of the city after Hurricane Katrina.) They banded together, marching and rioting to prevent Seabrook from becoming a black beach.

But during those decades when African Americans were kept out of New Orleans pools and beaches, black kids found other places to dive, like the other dredged-out canals around the city and dangerous parts of the Mississippi River. These unauthorized swimming areas would end up stewing a steady news feed of drownings. By the 1940s, the NAACP estimated that 15 black children had been drowning each summer in the city.

This chapter of New Orleans history helps explain some of the truths underlying the stereotype that black people don’t swim — but also illustrates why that reputation is ill-deserved, just like the notion that people of color don’t like the outdoors. The truth in it comes courtesy of the oft-cited statistics that close to 70 percent of black children can’t swim (compared to 42 percent of white kids) and black children are three times more likely to drown than white kids. But clearly, those stats don’t tell the whole story. 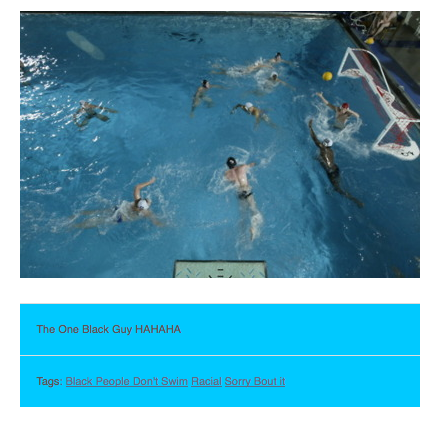 Andrew Kahrl provides a lot of stories of how African Americans were separated from the water in his 2012 book This Land Was Ours: African American Beaches from Jim Crow to the Sunbelt South.

“Of far greater concern for urban black populations than their ability to swim alongside hostile whites was the disappearance of their own informal gathering spaces — and the deterioration of remaining ones into cauldrons of death and disease,” Kahrl writes. “And in this respect, the places along urban shorelines African Americans were pushed to proved as significant in shaping the summertime experience of Jim Crow as the places they were excluded from.”

Kahrl recounts death tolls similar to New Orleans happening in D.C., where the “Anacostia River became the watery grave of countless numbers of black youth.” New Deal public works projects were of no help as they built swimming pools everywhere in the district except where black people lived. Reading all this put into perspective the overcautious demeanor of some of my family members here in the DMV area during my summer visits as a youth. I didn’t understand it then.

I spoke with my Aunt Katzie of Oxon Hills, Md., about it yesterday. She could still recall stories of the drownings. Black kids “would sneak into all these places, like around Rock Creek Park where you wasn’t supposed to be, but since they had nowhere else to go, they’d end up drowning,” she said. “They had no concept of deepness, they just thought water was water.”

Those fatalities and the racial exclusion that caused them have made plenty of African Americans nervous about water activities, for sure. Compound that with the images of the young, black boy Emmett Till being lynched and drowned in Mississippi’s Tallahatchie River in 1955, or the millions of Africans who were either tossed from the ships of the slave trade or died once they hit American shores, and you have a water connection that for many African Americans is, at best, brackish.

Tetsuhiko Endo wrote about this in his February 2012 article “Debunking the Stereotype That Blacks Don’t Swim,” over at the surfer blog The Inertia. There, Endo spoke with Jeff Wiltse, author of the book Contested Waters: A Social History of Swimming Pools in America, who explained the role of housing segregation in denying the opportunity to swim. Black kids couldn’t access public pools because they were placed in neighborhoods that black people couldn’t access.

But fortunately, that’s not the whole story, as I was reminded of yesterday when speaking with Carolyn Finney, author of the forthcoming book Black Faces, White Spaces, which examines the relationship between African Americans and the great outdoors.

“It’s so easy for us to get categorized for what we don’t do,” Finney told me. “It’s not simply that we’ve been excluded — yes, that’s one dimension, that was absolutely a part of it, and it still is. But we have always found ways to change the state of play.”

Meaning, African Americans were all for swimming before racist laws pitted swimming against us. Kevin Dawson’s “Enslaved Swimmers and Divers in the Atlantic World” is worth a read to learn about our African aquatic roots. That story could have ended with Seabrook in the 1930s or later with the Anacostia River. It didn’t. We fought to ensure that black children had the same right to summer fun at the beach and at the pool as any other child.

Cullen Jones was 5 years old when he almost added to the black boy death statistics, nearly drowning at the Wildwater Kingdom water park, in Allentown, Pa., not far from where I grew up in Harrisburg. But check him out in 2008, winning Olympic Gold in swimming, and not even the first black person to do it. He went on to win another gold medal in 2012, to add to his long list of swimming achievements, including a couple of world records. Perhaps he realized at some point that the water was more than just water.