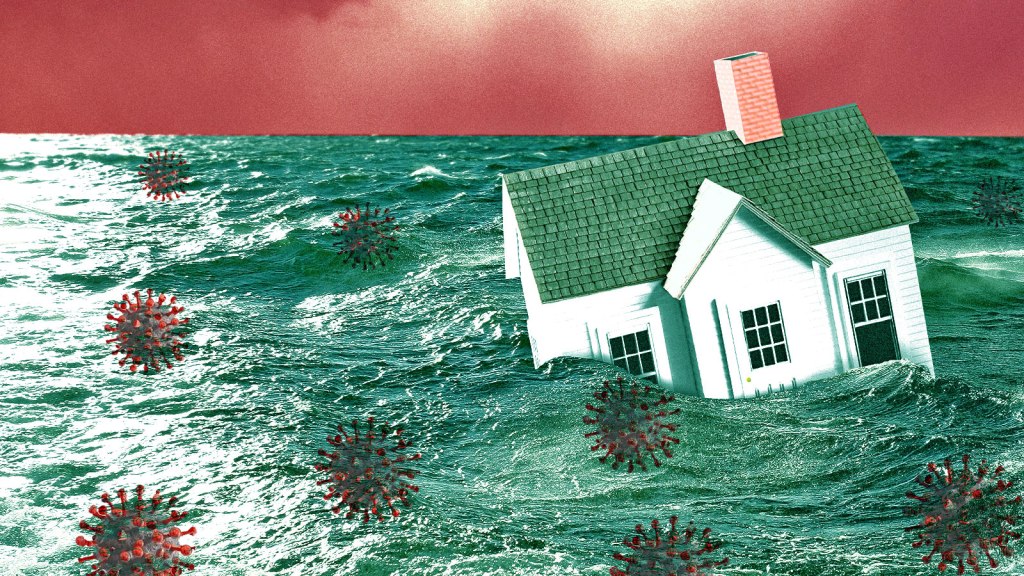 Grist / Steven Puetzer / Getty Images
when it rains it pours

In mid-March, the National Oceanic and Atmospheric Administration released its spring flooding outlook. According to its forecast, about a third of the U.S., 128 million people in 23 states, will be affected by flooding in the next few months, with the Northern Plains and Upper Midwest most at risk.

That prediction comes on the heels of a devastating year of flooding in America’s heartland. Between February 2019 and January of this year, Iowa, Michigan, Minnesota and Wisconsin experienced their wettest 12-month period on record, and Montana, Nebraska, Wyoming and the Dakotas experienced their second-wettest. Flooding is caused by a combination of factors, but climate change, which spurs warmer air and therefore more moisture, is one of them.

Meanwhile, most of the nation is under lockdown. COVID-19 testing capacity is still limited enough that state and federal officials don’t have a full understanding of how many Americans have been infected so far, but the number of confirmed cases is growing exponentially. Experts say the novel coronavirus could kill between 100,000 and 2.2 million Americans in the coming months, depending on which preventive actions are taken.

The nation has never had to deal with an epidemic and climate change at the same time. The way the federal government has handled both of those threats so far shows that it’s ill equipped to respond to scenarios that deviate from business as usual. Researchers have already determined that climate change acts as a threat multiplier: something that exacerbates existing risks. As we head into the spring and summer months and weather becomes more volatile, coronavirus could become a threat multiplier, too.

“A lot of folks that are focusing on the disaster space are starting to think about what we’re going to do with compounding events,” says Lauren Clay, assistant professor of public health at D’Youville College in Buffalo, New York. “We haven’t experienced a global pandemic in the U.S. on this scale in our lifetimes.”

The Federal Management Emergency Administration (FEMA), the agency that serves Americans affected by extreme weather, has been activated at the highest level to contain the coronavirus and placed in charge of the federal response to the epidemic. But FEMA is still reeling from three consecutive years of particularly catastrophic natural disasters, and it has its own coronavirus outbreak to contend with — seven employees recently tested positive for the virus.

“They were stressed even before the pandemic,” James Kendra, co-director of the Disaster Research Center at the University of Delaware, told Grist. FEMA was still working to resolve a number of disaster declarations from previous years — formal requests from cities, counties, or states for aid — before it was asked to join the effort to combat the coronavirus. To boot, the agency is chronically understaffed, even before President Trump reallocated some of its funding to immigration detention centers last summer.

When it comes to responding to the coronavirus, FEMA is in uncharted territory. If the agency had a plan for this scenario, Kendra isn’t aware of it. FEMA is using traditional tactics to confront this new challenge, announcing plans to distribute large quantities of medical equipment and supplies. But the agency has been light on specifics about what it has actually accomplished so far.

Once flooding and other natural disasters hit, Kendra says coronavirus is likely to hinder FEMA’s work because the social distancing required to keep FEMA staff and the people they interact with safe will affect the agency’s ability to do in-person field work. The agency has already suspended interpersonal fieldwork in Tennessee, where tornadoes killed 25 people in early March, because of the virus. FEMA agents will have to practice social distancing, disinfect facilities, and be far more mindful of disease transmission than normal, which in turn will be a “slowing factor on operations generally,” Kendra says.

At the same time, “the need for FEMA to be on the ground will probably be the same as usual,” Kendra says. The agency will have to adjust to figure out how to serve affected people without exposing them or its workers to coronavirus.

FEMA’s limited capacity to respond to natural disasters isn’t the only reason for Americans to fear flooding during the pandemic. A lot of the crops that go into our food, including as feed for livestock, come from the Midwest. For example, Iowa and Illinois alone supply one-third of the U.S.’s entire corn crop. Grocery stores have already seeing food shortages because of coronavirus. Will flooded farms make food more scarce?

At the moment, “We don’t actually have a disruption in the food supply chain,” Clay said. “There’s nothing stopping farmers from planting food, growing food, and putting food into the supply system.”

The bare shelves you might be seeing are a result of an abrupt spike in demand — people buying up a month’s worth of food instead of a week’s, and eating more meals at home instead of in restaurants. While kinks in the supply system are being worked out, there may be temporary shortages, but Clay says supplies will bounce back over time. The ripples will probably continue for as long as the pandemic does.

As spring unfolds, some specialty crops — aka fruits and vegetables — could be affected by social distancing policies implemented by fieldworkers and other issues brought on by the coronavirus. Strawberries grown in California will be picked more slowly by workers who are forced to spread out instead of crowding together. Apple orchards, which require large crews of workers to plant and prune trees, could see a shortage of labor due to limited availability of work visas (the federal offices that award visas have been closed for weeks). But overall, food will remain plentiful as long as the system adapts.

The addition of spring flooding and summer storms to the mix will require some adaptation, Clay said, but natural disasters have regional, rather than national, effects. “We might have some disruptions to some farms or some supply chains in different areas,” she said. But grocers will still be able to find suppliers in unaffected parts of the country. “The likelihood of us having flooding cause widespread disruptions would be minimal because we grow and produce foods in lots of different ways across the country.”

In the past few years, it has sometimes felt like Americans couldn’t catch a break from natural disasters. Floods in the Midwest in spring and summer were followed by West Coast wildfires and the Atlantic hurricane season in the late summer and fall. (The 2020 hurricane season, by the way, is expected to be “above normal.”) Now, the staggered nature of those events and their regionality is part of what’s preventing entire supply systems from collapsing during the coronavirus pandemic. In coming years, climate change could make those events far less staggered, extending the range of devastating floods across most of the country, spurring year-round fire seasons, and exacerbating the frequency of major hurricanes. If coronavirus has taught us anything, it’s that we need to start dividing some of our threat multipliers or risk confronting a challenge we can’t adapt our way out of.