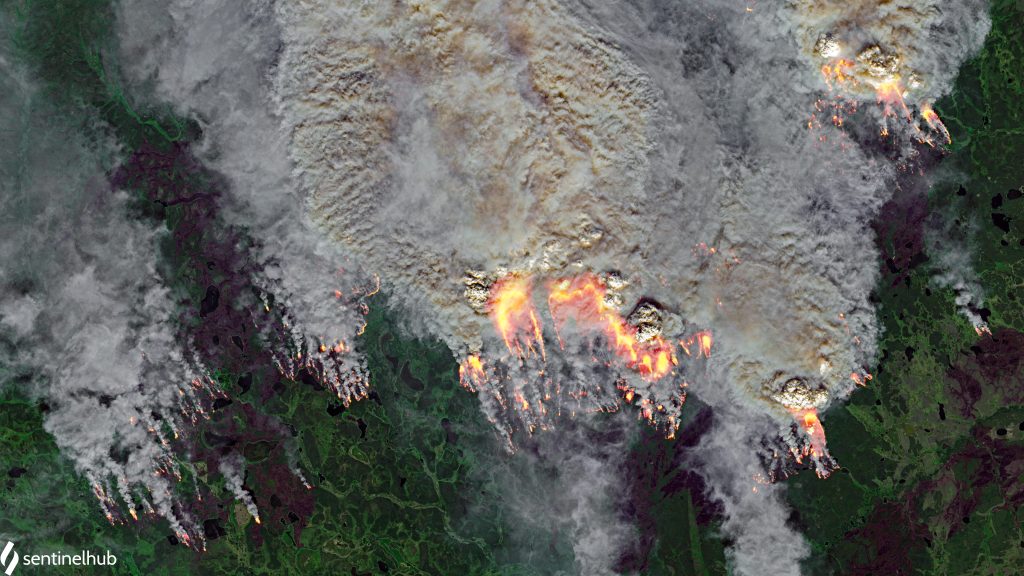 Several wildfires in the Sakha Republic, Russia, around and within the Arctic Circle. Copernicus Sentinel / Sentinel Hub / Pierre Markuse
my world's on fire, how 'bout yours?

Almost exactly a year ago, we reported that June and July wildfires in the Arctic had released as much carbon as Belgium does in an entire year — an unprecedented summertime burn that would amplify the region’s climate change–fueled fever. But everything, apparently, is worse in 2020, including the climate toll of this year’s Arctic fires, which makes 2019 seem like a warm-up.

Data released Monday by the European Union’s Copernicus Atmosphere Monitoring Service (CAMS) shows that in June and July, Arctic fires released 204 megatons of carbon dioxide, far exceeding last year’s 140 megatons and eclipsing the annual emissions of Denmark, Sweden, Norway, and Finland combined. With unusually high temperatures continuing to bake the Arctic, the flames show no immediate signs of dying down. Combined with the fact that some of this year’s fires appear to be burning into carbon-rich peat soils, the ultimate climate impact of this year’s fire season could be much greater than what scientists are currently estimating.

While last year’s Arctic fires spanned both Alaska and Siberia, this year, Siberia is the definitive star of the show. Following months of warm weather, fires began flaring up in northern Siberia around the start of May. The blazes escalated significantly in mid-June as a brutal heat wave descended on Russia’s northeastern Sakha Republic, causing the town of Verkhoyansk to sweat through the Arctic’s first-ever 100-degree F day. By the end of the month, Arctic fires had pumped 59 megatons of carbon dioxide into the air, eclipsing the 53 megatons emitted in June 2019 and setting a new high-water mark for Arctic fire emissions in records going back to 2003.

But things were still heating up. In July, Siberia’s wildfires ramped up even further as a large cluster of fires raged across both the Sakha Republic and the Chukotka region further east. Toward the end of the month, daily levels of “fire radiative power,” a measure of the fires’ heat output, far eclipsed those seen in 2019. CAMS senior scientist Mark Parrington told Grist in an email that over the last several weeks, satellites have detected around 600 individual fire “hotspots” in the Arctic Circle every day, compared with 200 to 300 on average in July 2019. By the end of the month, Parrington estimates these fires pumped another 145 megatons of carbon into the sky.

That emissions estimate is based on the type of vegetation burning at the surface, which means trees in Siberia’s taiga forests and grasses and shrubs on the tundra. However, a recent analysis by environmental geographer Thomas Smith of the London School of Economics shows that roughly half of this year’s Arctic Circle fires are burning on peatlands, which store enormous amounts of carbon below ground. Typically, these peat soils are too wet and cold to burn, but when they warm up and dry out, they can ignite and burn for months, causing centuries’ worth of buried carbon to go up in smoke. Peat fires also emit considerable quantities of methane, a greenhouse gas with roughly 30 times the global warming potential of carbon dioxide over a century.

Satellite imagery of individual fires “strongly suggests that a number of these fires are burning into the peat,” Smith told Grist in an email. “If the peat fires are widespread, it is likely that the emissions estimates from the satellite products are underestimates.”

In addition to greenhouse gases, the fires are pumping out copious amounts of particulate matter, the tiny particles that make wildfire smoke smoky. As blazes raged across Siberia last week, dense ribbons of smoke could be seen in satellite imagery streaming over the Bering Sea and entering Alaska and then northern Canada.

Experts say this smoke may also be having a climate effect: As dark-colored soot particles, also known as black carbon, land on Arctic ice, they cause it to absorb more of the sun’s energy, which hastens its melt.

“Some of the smoke from the fires has transported over the North Pole, directly over Arctic sea ice,” said Jessica McCarty, a fire researcher at Miami University in Ohio. “Black carbon deposition and increased surface melt are inevitable. This will amplify the melt process until winter begins the accumulation again.”

Arctic sea ice is already at record low levels for this time of year, largely due to an early season melt-out of ice in the Russian Arctic caused by the same abnormal warmth that has helped fires spread across the region. McCarty describes black carbon as “an additional heating process on top of increased water, surface, and air temperatures.”

Ultimately, the emissions produced by this year’s fires will cause additional atmospheric warming across the planet, but especially in the Arctic, where temperatures are rising at more than twice the average global rate. Accelerated sea ice loss, meanwhile, allows more of the sun’s energy to be absorbed by the oceans as heat, making it harder for the ice to regrow in the fall and winter, resulting in yet more heating up north.

It’s this interconnected web of rapid changes and feedback loops that illustrates why scientists consider the Arctic a portal into the rest of the planet’s future. We’d be wise to try and stop that future from going any further off the rails.