Bidet sales are on the rise. Is America ready? 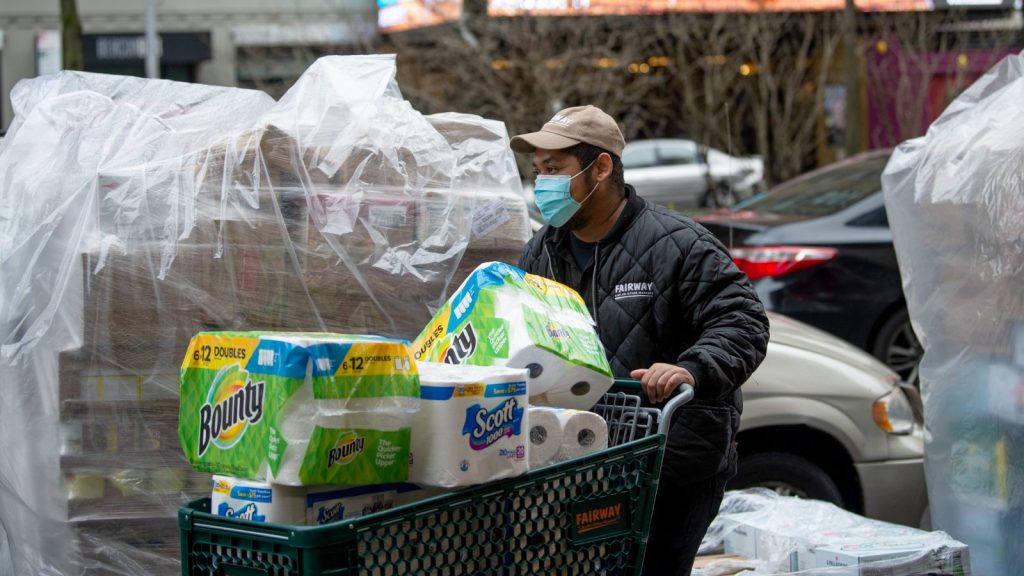 Bidet sales are on the rise. Is America ready?

At some point during this pandemic, you’ve probably found yourself worrying about your butt.

For me, it first happened on a run to CVS back in March, when I discovered the tissue aisle was almost completely bare. I felt like I was competing on a sick version of Supermarket Sweep, but instead of missing out on the prize money, the cost of losing was a dirty anus. The horror.

Other Americans apparently shared this fear. When panic shopping, plus supply-chain inefficiencies, fueled toilet paper shortages all over the country at the beginning of the coronavirus outbreak, people’s potential solutions ranged from the creative to the absurd to the illegal. A Los Angeles taco restaurant started selling “emergency taco kits” that included several pounds of meat, rice, beans, and, crucially, four rolls of toilet paper. In mid-March, TikTok personality Justin DeMinted posted a video showing followers how to conserve toilet paper by cleaning their nether regions with just two squares of tissue. “Going to have to poop and go straight to the shower it looks like,” Bachelorette star Tyler Cameron tweeted around the same time. Others joked about wiping with their fluffy dogs. Police even caught one individual transporting nearly 18,000 pounds of toilet paper with a stolen 18-wheeler.

The chaos, real and satirical, made one thing very, very clear: Americans have a toilet paper addiction. And it’s not just causing mass anxiety — it’s taking a toll on the planet. But, I have some good news: There is a better way to avoid fights in the supermarket and environmental devastation.

On average, Americans use nearly 28 pounds of TP per person annually, according to market research firm Statista. We consume 9.2 billion pounds of the stuff each year. That’s about the weight of 30,000 blue whales! Or nearly 10,000 International Space Stations. Or about 450 Eiffel Towers. Although Americans make up just 4 percent of the world’s butts, we generate more toilet paper waste than any other country, and we are responsible for a whopping 20 percent of global tissue consumption, according to the Natural Resources Defense Council (NRDC).

Worse still, a lot of that toilet paper is sourced from old, previously untouched forests. Leading U.S. brands like Charmin and Angel Soft, for example, make their toilet paper in part from pulp that’s sourced from trees in Canada’s boreal forest, where more than 1 million acres are logged per year, according to a 2019 NRDC analysis of leading American tissue brands. (On the organization’s toilet paper “scorecard,” Charmin Ultra, Angel Soft, Kirkland, Quilted Northern, and Up & Up Soft & Strong all scored Fs.) More than half of Canadian pulp and paper exports go to the United States. While the Canadian government insists that it’s logging its forests sustainably, the NRDC argues that Canada’s reforestation goals aren’t always met, and if they are, it still takes years for forests to grow back. Logging can also leave the landscape — which is home to moose, lynx, and caribou — permanently changed.

“This is not a link that people make easily,” says Shelley Vinyard, NRDC’s boreal corporate campaign manager and an author on the 2019 report. “When they’re walking down the grocery aisle and looking at buying toilet paper, they don’t think, ‘Oh, this roll here was made from a beautiful forest that’s home to threatened species.’”

Making toilet paper from trees also eliminates natural carbon sinks, in turn releasing massive amounts of greenhouse gasses. One year of using Charmin’s super-soft toilet paper, for instance, is equivalent to releasing more than 300 pounds of carbon dioxide into the atmosphere per person, according to a paper calculator from the Environmental Paper Network, a coalition of more than 140 nonprofit organizations, including the Environmental Defense Fund, Greenpeace, and NRDC.

In some ways, even more problematic than our TP habits are wet wipes, which are a relatively new trend and an entirely different environmental threat. Toilet paper breaks down in the sewage stream, but wet wipes, which are often also made from tree fiber, “are not designed to break down easily,” says Kate O’Neill, a professor in the Department of Environmental Science, Policy, and Management at the University of California, Berkeley, and author of the book Waste. “They will just clot together within the stream,” often forming masses called “fatbergs.” In 2017, for example, officials discovered a 140-ton fatberg below the streets of London. “They’re a real menace,”O’Neill says.

Conversely, bidets require no toilet paper or just a little to dry off, which can also be achieved with a hand towel. Bidets even rely on less water than it takes to produce toilet paper. Each bidet use requires just about one-eighth of a gallon. For comparison, I did a bit of back-of-the-napkin math to contrast this with each poop using TP: It takes an estimated 37 gallons of water to make just one roll of toilet paper. Let’s say that’s a two-ply roll with 450 sheets. If you wanted to match the water savings of a bidet, you’d have to limit use to just about 1.5 sheets of toilet paper per bowel movement, which I hope to God is unrealistic.

Make no mistake: Bidets aren’t carbon neutral. The appliances may be made out of plastic or ceramic — materials that come with their own negative environmental impacts, though data on how much is limited. But because wiping with trees is so wasteful, experts insist bidets are the superior option for your posterior.

So why haven’t bidets caught on? It may have something to do with a series of longstanding cultural taboos. While bidets are common in countries like Italy and Japan, Americans have historically resisted the idea of washing their behinds with water.

The bidet has a “long and very, very complicated history,” says Peter Ward, author of the book The Clean Body and a retired history professor, formerly at the University of British Columbia. The precise origin of the bidet is murky, but it dates back to the beginning of the 18th century in France — “maybe even before that,” Ward says.

Bidets initially were costly, and in the early 19th century, plumbing was a luxury. They became a status symbol associated with the upper class and were often “elaborately made,” Ward writes in The Clean Body. In 1808, for instance, Napoleon Bonaparte obtained a bidet made of silver and trimmed with diamonds, though it’s unclear if he ever used it.

This association stuck for, quite literally, hundreds of years. During World War II, as Maria Teresa Hart reported in a 2018 piece for the Atlantic, American troops stationed in Europe associated bidets with sex work. “In the United States, bidets recalled all kinds of feminine failings: women’s sexuality, women’s unwanted pregnancies, and women’s biology,” Hart writes. “As such, they were shunned.”

Sales never took off in the U.S., even as bidet use expanded and became widespread elsewhere.

Toilet paper, on the other hand, grew to be immensely popular during the early 20th century in the U.S. Before its invention, people used other paper products like newspapers and books, corn husks, leaves, pretty much whatever they could find to clean themselves. Toilet paper was technically invented by an American named Seth Wheeler, who holds an 1891 patent for the perforated toilet paper roll. But an earlier product, “Gayetty’s Medicated Paper for the Water-Closet,” had been sold and marketed in the U.S. years earlier as a healthy alternative to other, chemical-laden paper goods. (“Printed paper, everybody knows is rank poison to tender portions of the body,” one advertisement read.) By 1900, with the rise of indoor plumbing, toilet paper had become a common household product.

Now things are starting to shift. Even before the outbreak of the novel coronavirus, bidet sales were on the rise, especially among young people. In January 2019, USA Today reported that the then-$106-million market for bidets was expected to grow over 15 percent annually over the next two years. Between 2016 and 2018, website BidetKing.com reported a 30 percent growth in sales annually, and Tushy, a New-York based bidet startup that is working to rebrand a bidet-cleaned behind as altruistic and cool, has seen their profits double every year since it was founded in 2016. “Millennials embrace disruptive ideas, disruptive products with much greater ease and enthusiasm than their predecessors,” Tushy’s growth marketing director Andy Stone tells me. “I think Gen Z is going to be a huge, huge audience for products like Tushy.”

The past few months have seen an even bigger surge in bidet enthusiasm. Tushy, which retails its toilet attachment for $89, tells me that it broke $1 million in sales on a single day in mid-March and that it saw its revenue jump 10 times what it was projected to be in March. “The corona pandemic just kind of shoved people over the edge who have already been thinking about [getting a bidet] for a really long time,” says Tushy founder Miki Agrawal. “They ran out of toilet paper. Oh, what’s top of mind? ‘Now’s probably a good time to try a bidet.’” Similarly, bathroom wares company Brondell told Business Insider in March that they were selling a bidet every two minutes on Amazon, or about a thousand units per day. And James Lin, the owner of BidetKing.com, told Wired around the same time, “We’re seeing increased site traffic, customer engagement, and sales volume.”

Not that this will surprise you at this point in your reading, but I too am a recent bidet convert. Before COVID-19, the way I felt about getting a bidet was a lot like how I once felt about getting a nose ring: I wanted one, but was always too scared to go through with it. The pandemic changed that.

When I emailed Tushy to say that I was writing about bidets, they sent me a complimentary Tushy Classic toilet attachment, along with some bamboo toilet paper (a more sustainable option than regular toilet paper), bamboo butt towels, and a travel bidet, which basically looks like a children’s sippy cup with an elongated nozzle. The Tushy Classic arrived in a cardboard box that described the product as a “Bum Wash a.k.a Booty Cleaner a.k.a. Avant Garde Post Poo Routine a.k.a. Your New Butt Buddy.”

It seemed easy enough; I attached the bidet to my toilet’s waterline and then sandwiched it between the toilet and the seat. It included some trial and error when the connection leaked and the seat didn’t fit properly, plus some angry pleas for my roommate to help: This is impossible to do with just two hands! I screamed. But, all things considered, the installation went pretty OK.

When Agrawal and I spoke, she recommended that users at first “go really easy and gently on the knob.” Thank goodness I listened — even the low setting on that thing is enough to make you wince. Still, I was pleasantly surprised by the whole experience.

I’ll spare you the rest of the details, but I will say this: I’m a very clean person. Crucially, doctors say that bidets are actually more hygienic. (Seriously, science tells us your butt isn’t as clean as you think it is.) And my ass needs to sparkle, always. With a bidet, that wasn’t a problem. And if I’m helping save a ton of trees in the process? Even better.