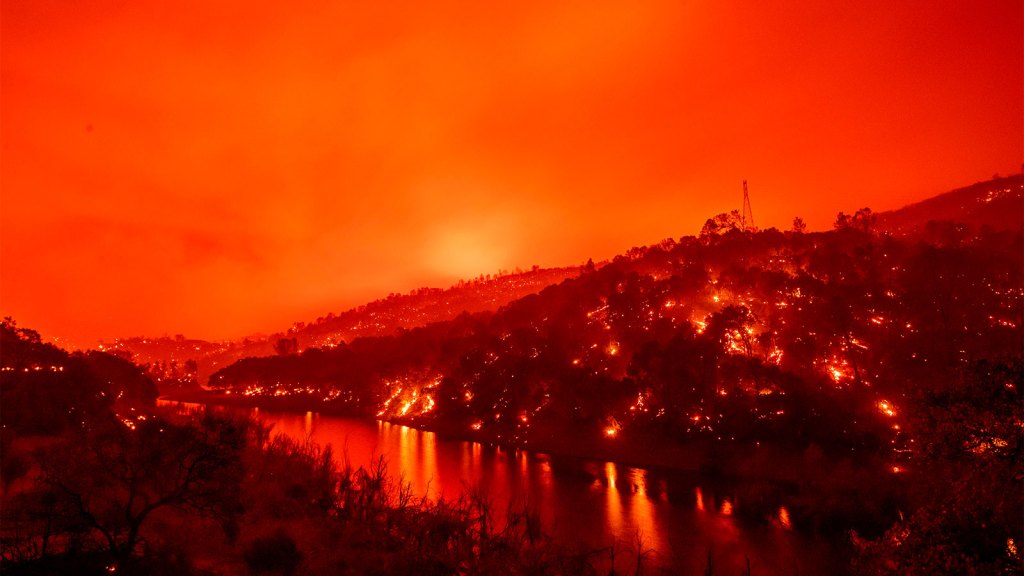 If it seems like the wildfire season is getting worse and worse with each passing year, that’s not just your perception. It’s still early in California’s wildfire season, yet 2020 has already become one of the state’s more devastating burn years. This month, more than 13,000 lightning strikes ignited hundreds of wildfires throughout the state, destroying around 1.4 million acres — more than 25 times the area burned by this time last year. Several people have died, thousands of structures have been damaged or destroyed, and 170,000 residents have been subject to evacuation orders. Quite literally adding fuel to these flames, is — what else? — climate change.

Climate change drives wildfires primarily by drying things out, allowing fires to burn hotter, faster and bigger; as temperatures rise, evaporation increases, leaving less water available for plants. Climate change is also decreasing the amount of moisture in the air, known as the vapor pressure deficit, further drying out vegetation. Daniel Swain, a wildfire and climate scientist at the University of California, Los Angeles, told Grist that drier vegetation changes the character of wildfires, producing “all sorts of more extreme fire behavior, faster rates of fire spread, larger fires in general, making them harder to fight and having a different effect on ecosystems.”

It may be a while, however, before we know just how much of a role climate change played in this year’s fire season. Attribution — the sub-field of climate science that looks at the extent to which a particular weather event is made more likely or more severe by global warming — takes time to calculate. Wildfire attribution is particularly complicated, because unlike hurricane or flood events, direct human influence — including land management and accidental ignitions — is also a major contributing factor.

What’s more, attribution science moves much slower than the news cycle. “That’s the problem with attribution studies; if you do them carefully, they often don’t come out until well after the event in question is over and the cleanup has largely moved out of people’s minds,” said Swain. “So there is a bit of a disconnect or a time lag between when it’s maximally publicly visible in the news and when the science says, ‘Yeah, actually climate change played a big role in this.’” Swain and his colleagues just finished an attribution study on California’s wildfire season of 2018.

In the meantime, Swain and his colleagues use a strategy called “soft attribution.” Instead of focusing on specific events, like this month’s fires, they talk about climate’s general influence on a particular aspect of that event. For instance, Swain says that we know that climate change is driving the increase in the area burned by wildfires in general — in California that area has increased five-fold since 1972. “Even though we’re not talking about the specific fires this year, we know that summer fires are getting worse because of climate change,” he said.

The worst of 2020’s fire season may be yet to come. In some parts of the state, wildfires peak in autumn with the arrival of strong, dry winds. “That’s when we tend to see the biggest and the most severe, most dangerous fires,” says Swain. “We haven’t even gotten to that point in the calendar year yet.” Climate change is also shifting the timing of seasonal weather patterns, including delaying the state’s autumn rains, pushing the fire season later into the year. Swain says that the increasing overlap of summer dryness and fall winds represents the “worst of both worlds.”

As the world continues to warm and the fires rage hotter and bigger each year, California needs to figure better ways to live with and adapt to the fire season. That includes better forest management. Swain said part of the problem is the way fire was demonized during the 20th century, including low-intensity wildfires that naturally clear out the underbrush of ecosystems. By preventing all forest fires, including the good kind, states like California ended up exacerbating the dry brush problem we face today.

One way to adapt to a future with bigger, stronger fires might be, in fact, more fire: Indigenous Californians practiced prescribed and managed burns as a forest management technique for thousands of years. “We should probably take a page out of that book,” said Swain, “thinking how to fight fire with fire, and essentially recognizing in the wider sense that not all wildfire is inherently bad.”