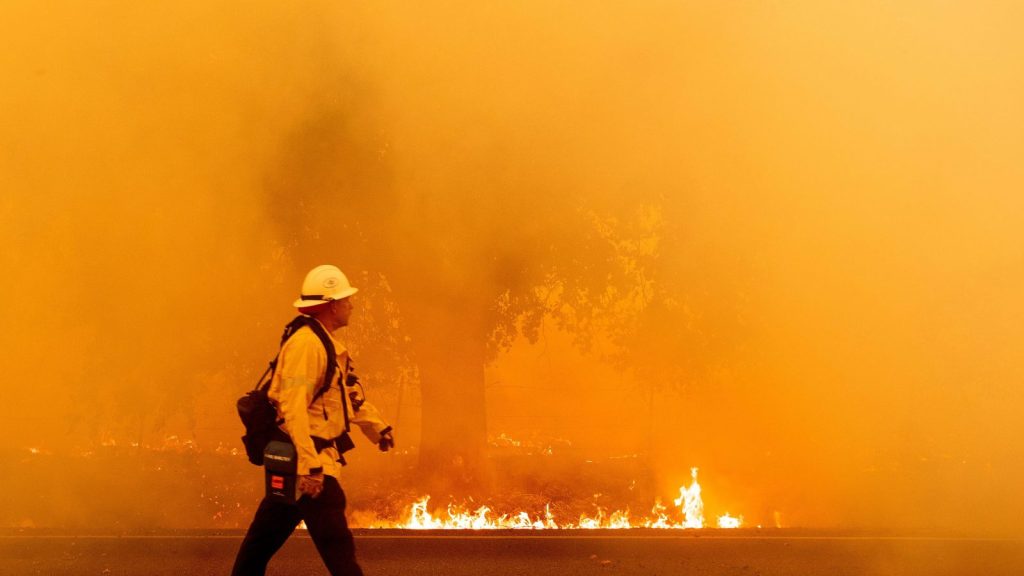 After four years of choking summer smoke, massive wildfires seem like a permanent fixture of life in the West. The second largest fire in Colorado history is burning near Grand Junction, while California is struggling to cope with the second- and third-largest fires in its history at the same time. Smoke from the blazes has created the world’s worst air quality in California, with smog blowing all the way to New England.

Government agencies have begun to ramp up a response — thinning trees, conducting controlled burns, and cutting back brush on hundreds of thousands of acres a year. California recently signed an agreement with the Forest Service to sustainably log dense forests and set controlled fires in an area the size of Yosemite every year. In a few years, millions of acres across the West should be prepared for wildfire, with new swaths added by each successive fire season. That’s the scale needed to turn suffocating clouds of smoke into a thin haze.

“This comes from the federal government realizing that the forest is in crisis, and it’s an all-hands-on-deck situation,” said David Edelson, Sierra Nevada program director for The Nature Conservancy. “It’s a big step in the right direction.”

Under the agreement between California and the federal government, signed earlier this month, workers will restore a million acres of forestland annually. That restoration would take the form of thinning trees, chipping up downed wood, prescribed burns, and timber cutting where it makes both ecological and economic sense. This deal applies to 34 million acres of land in and around areas managed by the Forest Service, which works out to a third of California’s landmass.

There’s still a lot more to be done to make the West more resilient to wildfires. LeRoy Westerling, who studies wildfire and climate change at the University of California, Merced, said that California and other states should pass legislation to give insurance companies information they need to assess the risk that any given house will burn down. If insurance premiums reflect the risk of fire, landowners would have an incentive to reduce that risk by cutting back trees near their houses, or upgrading their roofs and walls with fireproof materials.

Ever since settlers took control of the western United States, they have put out wildfires. As a result, there’s 150 years worth of fuels — downed wood, brush, and crowded stands of trees — waiting for a spark. In recent years, this accumulation of wood, combined with climate change, has proved too much for fire suppression efforts, and massive blazes have overwhelmed the region at the end of each summer.

“What we are trying to do is unravel a century-old bad policy decision,” said Jessica Morse, deputy secretary for forest management at the California Natural Resources Agency.

That bad policy began with the Great Fire of 1910: For two days hurricane-force winds blew a 100-foot tall wall of flame across 3 million acres of Idaho and Montana. Afterward, President Teddy Roosevelt convinced Congress to give the Forest Service the money to fight fires, essentially turning it into a fire suppression agency. “It had the motto of ‘Fires out by 10 a.m.,’” Morse said. “It leaves us with the forests we have today: Overly dense, overly stocked and burning with high temperatures and destructiveness.”

In the 1980s, the Forest Service began trying to change course, restoring fire to forests. But in many areas — particularly the drier forests of the Southwest — the Forest Service and other landowners needed to thin out the trees and remove brush so that fires would move along the forest floor rather than blazing into the upper branches and wiping out whole landscapes. For the last 50 years, the Forest Service has been woefully behind: Always putting out fires, rather than preparing for the next one. The Great American Outdoors Act, signed by President Donald Trump last month, provides a new pot of money to deal with this deferred maintenance.

“There’s this political narrative that began with Ronald Reagan that we can have a prosperous economy and low risk if we stop doing public investment. So for two generations we’ve been underinvesting in everything,” Westerling said. “Everywhere you look you can see the effect: The roads are shit, the health system is in shambles, we are lagging in clean energy, and our forests are burning.”

Some environmentalists still bristle at the idea of cutting down trees to save the larger forest, Edelson said. “But the science is clear that ecological thinning of trees along with controlled fire will be necessary to improve the health of the forest.”

And that scientific clarity means that there’s now more cooperation than fighting. Conservation groups now work with state governments to speed up the environmental review process on projects to thin forests. California Governor Gavin Newsom bypassed the review process to clear brush and wood from an area outside the tiny Gold Rush town of Colfax. And because the state was partnering with the California Native Plant Society, there were no protests or lawsuits from environmentalists. Instead, masticating machines tore out invasive blackberries, a dry creek reemerged, and morning glories and milkweeds bloomed. The project — which would normally have been a bureaucratic ordeal — was done in under a year, Morse said.

“It’s easy to move in lockstep when there is consensus about the science,” she said.

The agreement between the Forest Service and California doesn’t mention money, but the work it describes will cost hundreds of millions of dollars every year. That’s in addition to the money California is already spending. Back in 2018, then Governor Jerry Brown committed $200 million a year to local governments and nonprofits to cut back trees around towns.

As workers have begun doing this forest restoration work, they’ve created big piles of wood. In the Tahoe National Forest alone, there are some 400,000 slash piles, some several stories high, often set alight to burn in place.

Morse said the recent agreement means some of that wood will wind up turning into apartment buildings: California changed its building standards this month to allow wooden buildings up to 18-stories tall. So far, these “plyscrapers” have mostly been one-off exceptions, but now wood that was destined to go up in smoke could instead replace carbon-intensive steel and concrete in new buildings sprouting up around the state.