The 60-year-old Congress member from New Mexico will next month become the first Native American cabinet secretary in U.S. history, when she takes responsibility for the country’s land and natural resources as head of the Department of the Interior under Joe Biden.

Haaland is a member of the Laguna Pueblo, one of 574 sovereign tribal nations located across 35 states. According to the 2010 census, 5.2 million people or about 2 percent of the U.S. population identifies as American Indian or Alaskan Native — descendants of those who survived U.S. government policies to kill, remove, or assimilate Indigenous peoples.

Come January it will also be Haaland’s job to uphold the government’s legally binding obligations to the tribes — treaty obligations which have been systematically violated with devastating consequences for life expectancy, political participation, and economic opportunities in Indian Country.

In an interview days before her nomination, Haaland told the Guardian that as Secretary of the Interior she would “move climate change priorities, tribal consultation, and a green economic recovery forward.”

It’s a big job with high expectations after four years of racist rhetoric and destructive environmental rollbacks by the Trump administration, which showed contempt for the climate or environment by green-lighting planet-heating fossil fuel projects on public and tribal lands with little regard for culturally and ecologically important sites.

“I’ll be fierce for all of us, for our planet, and all of our protected land,” said Haaland in her acceptance speech. “This moment is profound when we consider the fact that a former Secretary of the Interior once proclaimed it his goal to, quote, ‘civilize or exterminate’ us. I’m a living testament to the failure of that horrific ideology.”

Indigenous communities in the U.S., and globally, are disproportionately vulnerable to the impact of the climate crisis such as rising sea levels and droughts, and environmental hazards resulting from polluting industries. As Secretary of the Interior, Haaland will play a key role in undoing Trump’s rollbacks and will also be a key lieutenant in Biden’s new climate team.

This is not the first time Haaland has made history. In 2018, she became one of the first two Native women in Congress, alongside Sharice Davids of Kansas. In January, a record-breaking six Native Americans — four Democrats and two Republicans — will be sworn in. 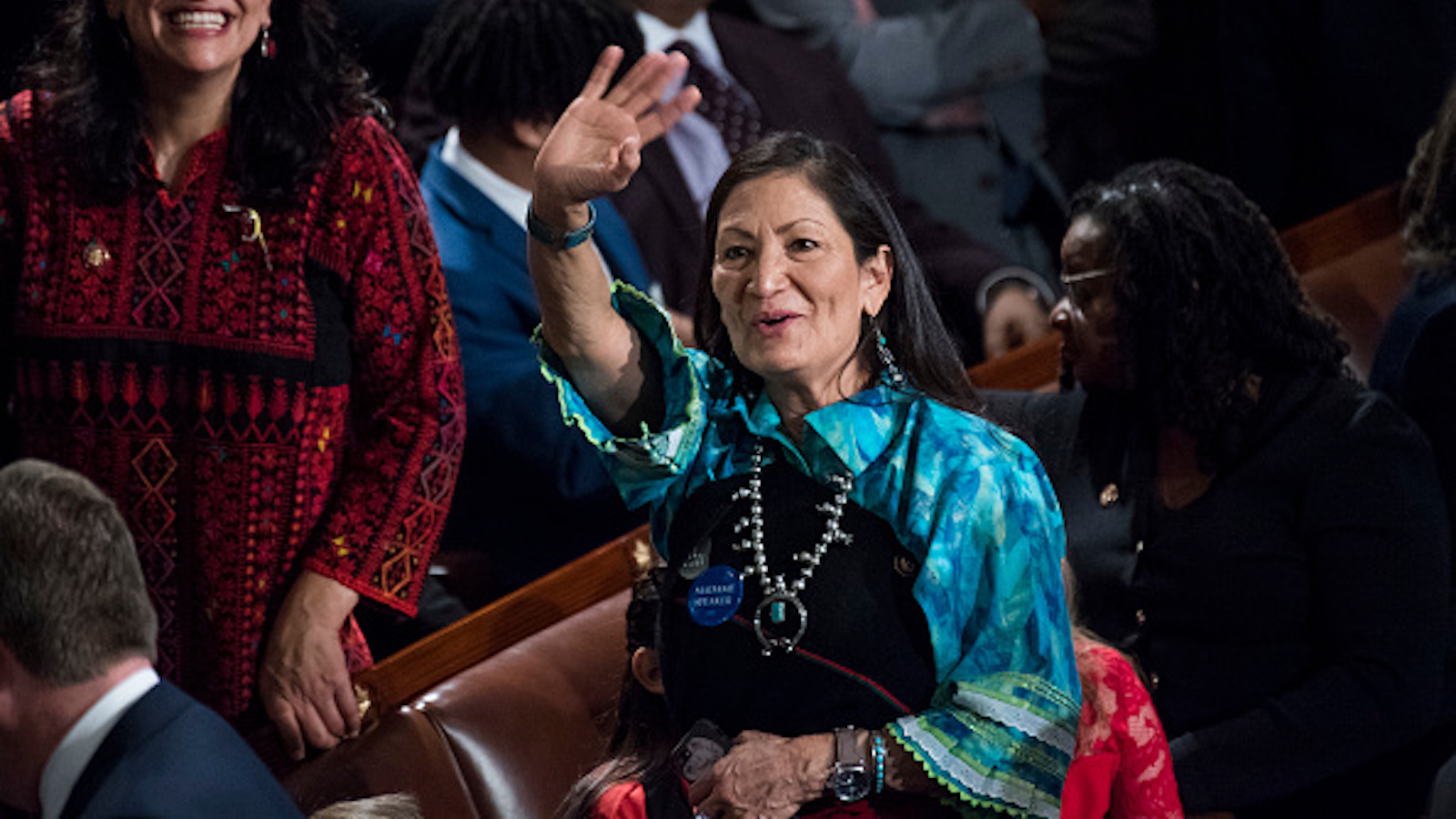 Haaland made history as one of the first two Native American women elected to Congress, in 2018. Tom Williams / CQ Roll Call / Getty Images

Representation and diversity matter, according to Haaland, because life experiences shape political decisions. “We don’t need people who all have the same perspective, we need people from various parts of the country, who’ve been raised in different ways, who bring that history and culture with them, and employ what we’ve learnt from their parents and grandparents, and bring all of that to bear in the decisions that we make,” she told the Guardian.

It’s been a rocky road for Haaland who like a disproportionate number of Native Americans has experienced homelessness and relied on food stamps. She is also the product of racist policies such as the forced removal of thousands of Native children from their families between 1860 and 1978. At the age of eight, Haaland’s grandmother was sent to a Catholic boarding school for five years a hundred miles from home.

“There are a lot of people in this country who suffered historical trauma from that era. I carry that history with me, I’m a product of the assimilation policy of the United States. I feel very strongly that having this perspective is super important for the issues we bring to Congress.”

Haaland was elected to the House of Representatives in 2018 after campaigning under the slogan: “Congress has never heard a voice like mine.” Since then, she has introduced legislation that would establish a truth commission on Native American boarding schools and spearheaded two laws to combat the epidemic of missing and murdered Indigenous women — crimes increasingly linked to transient extractive industry workers living in so-called man camps near or on tribal lands.

“Indigenous women have been missing and murdered since Europeans came to this continent in the late 1400s. Violence against women is a priority of mine. It’s not going to be fixed with just two pieces of legislation, but now it’s time to dig deeper and keep working,” she said.

Haaland will be the most senior Native American in the U.S. government since the Republican Charles Curtis, a member of the Kaw nation situated in what is now Kansas, who served as vice-president to Herbert Hoover between 1929 and 1933.

She will be part of a government facing unprecedented complex and interconnected challenges including an out-of-control pandemic, global economic recession, spiralling hunger, and the climate emergency.

Haaland’s track record working across partisan lines may also prove vital for Biden’s success, at a time when the country — and lawmakers — are deeply divided.

She said: “I’ve gotten more Republicans to sign on to my bills than any other Democrat. It’s important for all of us — county commissioners, governors, and mayors, not just Congress – to make sure we’re working together for the greater good. We want to pass laws that will help people across the country, and we need to make sure these messages are getting out … I’m going to continue to reach across the aisle, to protect our environment and make sure that vulnerable communities have a say in what our country is doing moving forward.” 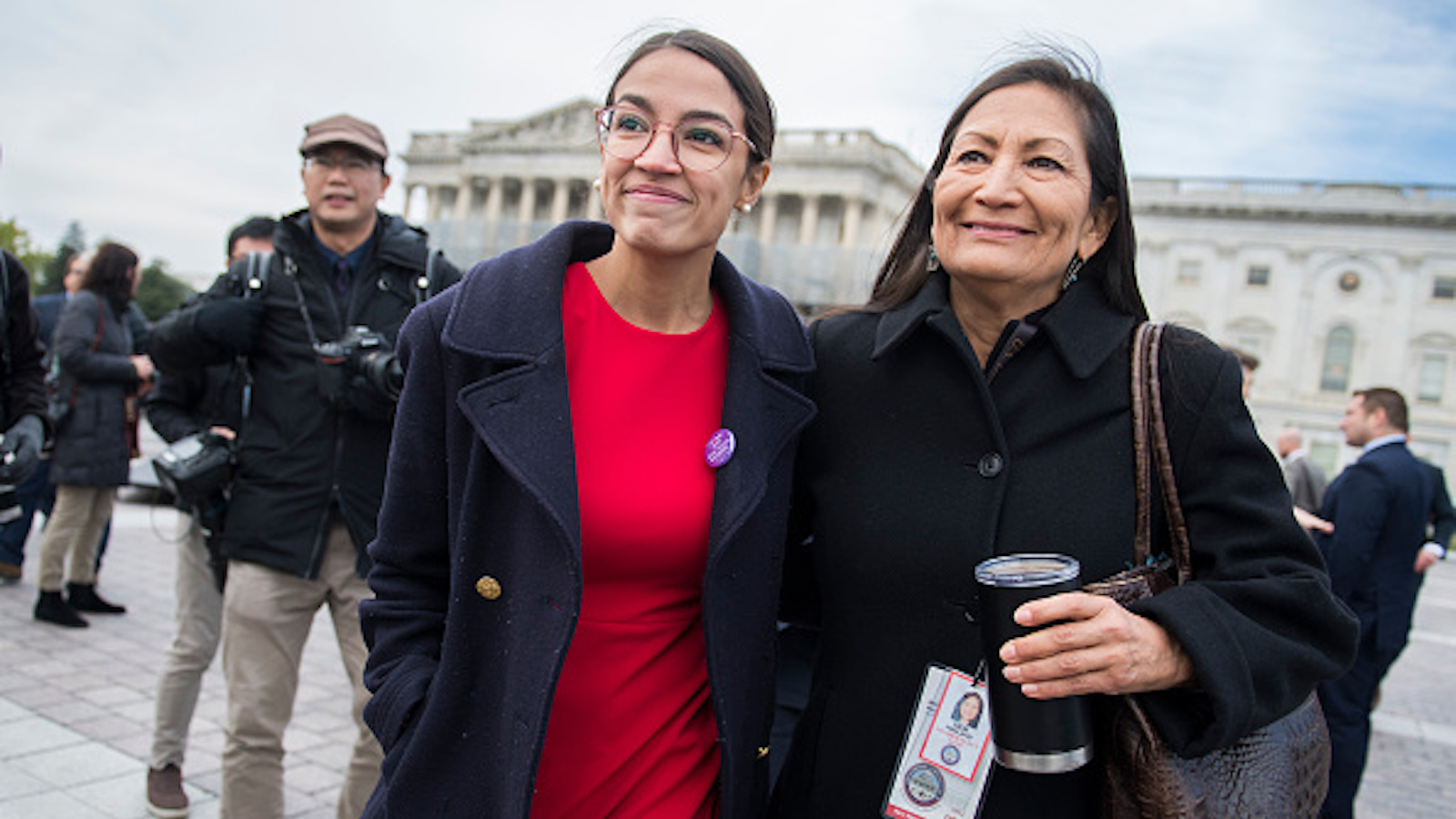 Haaland, although a progressive Democrat like Alexandria Ocasio-Cortez, left, has been successful in attracting bipartisan support for her initiatives in Congress. Tom Williams / CQ Roll Call / Getty Images

The Department of the Interior’s 70,000 or so staff oversee one-fifth of all the land in the U.S. and 1.7 billion acres of coastlines, as well as managing national parks, wildlife refuges and natural resources such as gas, oil, and water.

A shift in priorities at the interior department could have major implications for global heating as about one-quarter of all US carbon emissions come from fossil fuels extracted on public lands, according to the U.S. Geological Survey.

Earlier this year, Haaland sponsored a bill that would set a national goal of protecting 30 percent of U.S. lands and oceans by 2030 – a plan since adopted by the Biden administration as a priority for his environmental agenda.

“Environmental injustice and economic injustice have taken a hold of so many communities, and they’ve had enough. They want us to pay attention and help them to succeed … As far as Indian Country is concerned, I want to make sure tribal leaders — and all marginalized communities — have a seat at the table.”

In stark contrast to Trump, Haaland believes that Biden will consult Native Americans – as the government is legally obliged to do. “I am confident that this president will pay attention to Indian Country, that’s why I believe so many [Native Americans] came out to vote, and helped him win Arizona and Wisconsin.”

Restoring protections eroded by Trump for Bears Ears and Grand Staircase-Escalante — national monuments in southern Utah which are sacred to Native Americans, is a priority for Haaland.

November’s elections took place after a summer of unprecedented protests demanding racial justice sparked by the death of George Floyd, a Black man in Minneapolis who was killed by a white police officer kneeling on his neck for almost nine minutes.

Progressive Democrats, including Haaland and the so-called Squad — made up of congresswomen Alexandria Ocasio-Cortez, Ilhan Omar, Ayanna Pressley, and Rashida Tlaib — elevated demands by protesters for radical structural changes to eradicate racial inequalities in health, housing, immigration, education, jobs, and the environment.

“So many Native Americans joined the Black Lives Matter protests because Indian Country recognized that we are allies in the fight for environmental justice, economic justice, and racial justice … These communities on the frontline deserve to have the resources to be able to lift themselves up,” Haaland said.