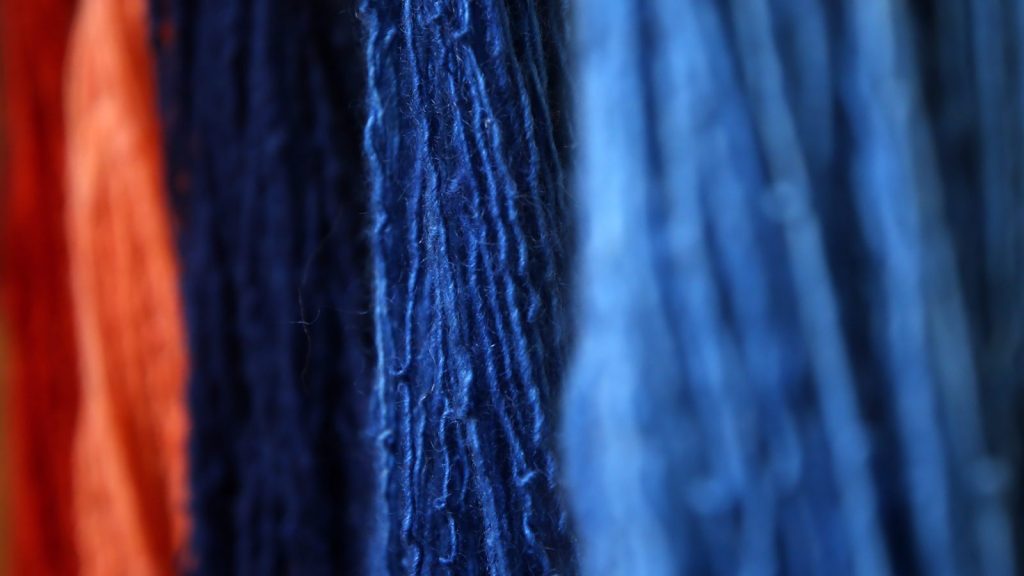 Last week, as January became February, I noticed that green shoots from the daffodils in my front yard in Ohio were already poking above the ground. On Sunday, writer Josie George shared a photo on Twitter of a scarf she had been knitting, with a daily row for the temperature and weather in her town. “It felt like a good way to engage with the changing climate and with the changing year,” she wrote. “A way to notice and not look away.”

I decided that this year, every day, I would knit a row on a scarf to mark the corresponding daily temperature/weather of my town. It felt like a good way to engage with the changing climate and with the changing year. A way to notice and not look away. Here's January then. pic.twitter.com/XQ9scIMX5c

In response to George’s viral tweet, a number of knitters, cross-stitchers, and quilters shared their own projects. The idea of a temperature scarf, it turns out, is at least a half a decade old, and a whole lot of people are trying to chart the “new normal” in yarn. In 2015, Joan Sheldon, a marine scientist, knit a scarf depicting global average temperatures from the 1600s to the present. Last year, the St. Paul Star Tribune covered a knit-along called Weather or Knot, conducted by one of the city’s yarn stores, that asked knitters to make a temperature blanket or scarf; that knit-along was inspired by the Tempestry Project, a group founded in Washington state in 2017, that now has chapters across the country. Climate crafting, it seems, has come into its own.

This is my 2018 temperature blanket. Might do another in 2023 and see how different it looks pic.twitter.com/EBDs21uqQV

Knitters replying to George’s tweet didn’t always begin their projects with climate change in mind. “I’m an inexperienced knitter, had seen temperature blankets on Pinterest and just thought they looked cool,” Rachel Chilton said via email after I asked how she came up with the idea for the project she shared to George’s thread. “Now that I have this record of 2018 I am seriously considering repeating the exercise every five years — probably not more blankets, but perhaps scarves instead, since the blanket took me over 120 hours to knit and cost a small fortune in yarn!”

A cross-stitcher from France is making a little “village” of houses with the low temperature of the day stitched on the door and windows and the high temperature on the walls. She said via email that she started her project after seeing the idea discussed on a Facebook fan group for the French cross-stitch designer Nathalie Cichon. Like others using climate data for craft projects, this cross-stitcher, who preferred to remain anonymous, began the work without intending for it to become a conversation piece, but feels differently now.

“I pictured my project as a personal memo of the temperatures of 2020,” she said over email. “However, the further I go the more I can see the impact it can have. I am angry and sad every time I have to stitch a house with a color that shouldn’t be there … It makes me want to show it more and more so that people can see. I shouldn’t have green houses in January or February, and yet I do!” For her part, Rachel Chilton said that she didn’t think anyone else would find her temperature-blanket project very interesting, “but everyone who has seen the blanket has wanted to talk about how hot the summer was and how late into the autumn the warm temperatures continued.”

While it’s possible to keep a plan for a temperature blanket quite simple, or to use a template or kit (like the Tempestery Project’s) to make one, embarking on a more complicated climate-related craft project that you design yourself can have the side effect of connecting the knitter or quilter to climate data in a new way. I spoke with Fran Sharp, a quilter from Massachusetts who had begun work on a temperature quilt without quite knowing how many other people were carrying out similar projects. (Her quilt represents temperature data for Boston from January to October of 2019; each rectangle has two triangles representing the high and low temperatures of each day, and January 1 is on the upper left.) When I shared George’s thread with Sharp, she was full of new ideas. “This got me thinking about all the different things one could portray,” she said. “I made a list. Temperature extremes, effects on animal life, food production … an unlimited number of ways you could depict the ways climate change is affecting the earth.”

The knitter, quilter, or cross-stitcher who works on a climate-related design can make interesting design choices that force deep interaction with the data. The Weather or Knot design, for example, featured different colors for absolute temperatures, and varied stitches that reflected whether the day’s temperature was above or below the average. A Philadelphia group inspired by the Tempestry Project assigned individual knitters separate years of the city’s temperature data, with the hope of displaying more than 100 “tempestries” next to each other.

I did this blanket for my 50th birth year (2017). I used a 2 degree difference for colour. Ended up with 23 colours and an enormous blanket.

The green around the edge represents the seasons. pic.twitter.com/C7vYhNmsBS

“Paying attention changes the way you interact with the world,” historian of science Mark Hineline argued in his 2018 book advocating that people adopt practices of local observation during climate change. Climate crafting takes that kind of daily attentiveness and amplifies it. As Katharine Schwab pointed out in a Fast Company piece, knitting has long been recognized as conveying mental health benefits. But there’s more to this particular kind of craftivism than self-care. The act of crafting — you are, after all, doing something slowly that machines could do much quicker — is, itself, a sort of protest against the industrial world that gave us climate change in the first place. “Crafting creates slow space, a speed at odds with the imperative toward hyperproduction,” Jack Bratich and Heidi Brush write in a history of crafting and activism. “Crafting also ruptures the seamlessness of the technological present.”

These projects also play with the idea of “steganography”— the concealment of secret information in plain sight. The Tempestry Project’s Emily McNeil told the Philadelphia Inquirer in 2019 that the group formed after hearing about scientists and archivists who were preserving climate-related research data before the Trump inauguration in early 2017.“We were just sort of joking one night about how we should return to more concrete forms of data storage, like tapestries, because you can’t just get rid of them on the internet,” McNeil said. The history and mythology of fiber and textile art is full of steganography, real, fictional, and apocryphal — the Belgian resistance during World War II, recruiting women whose windows were located over train yards to knit patterns of the trains’ arrivals and departures; Madame Defarge of Dickens’ A Tale of Two Cities, knitting a list of people to be guillotined; enslaved women sewing codes into quilts that helped people navigate the Underground Railroad.

Climate change is a classic open secret: a thing that we all know is happening, but that our officials (by and large) choose to ignore when they are making the decisions that matter. The temperature blanket is a very 2020 way to call attention to the reality of this data. There it is, warming your legs.