From Typhoon Hagibis in Japan to Cyclone Idai in Mozambique to Hurricane Dorian in the Bahamas, climate change–fueled tropical storms have been increasingly wreaking havoc on coastal regions across the globe.

These storms, especially in vulnerable communities, create significant economic losses. Although levees or seawalls have been thrown out as ideas for preventing those losses, such coastal defense infrastructure can be costly. It can also have detrimental impacts on nearby ecosystems.

As climate change worsens, more and more experts are beginning to talk about nature-based solutions as a way to protect coastal regions from damage and mitigate economic losses. A new study released last week in the Proceedings of the National Academy of Sciences examines the role mangrove habitats in coastal areas in Central America play in mitigating economic losses from hurricanes. Mangroves are trees that grow in coastal waters.

“When you take a look at these mangroves, they’re these really dense ecosystems that could essentially act as a wall or barrier for wind and storm surge,” explained Alejandro Del Valle, an assistant professor of risk management and insurance at Georgia State University and one of the lead authors of the study. “The key part is that these ecosystems are literally in the coastlines. It’s already there, so you don’t need to spend too much money in constructing it, just conserving and protecting it.”

Analyzing these data sources, the researchers found that hurricanes can lead to significant economic losses but that wide mangrove belts are capable of mitigating the damage. The wider the swath of mangroves, the lower the impact from hurricanes, and less economic damage. 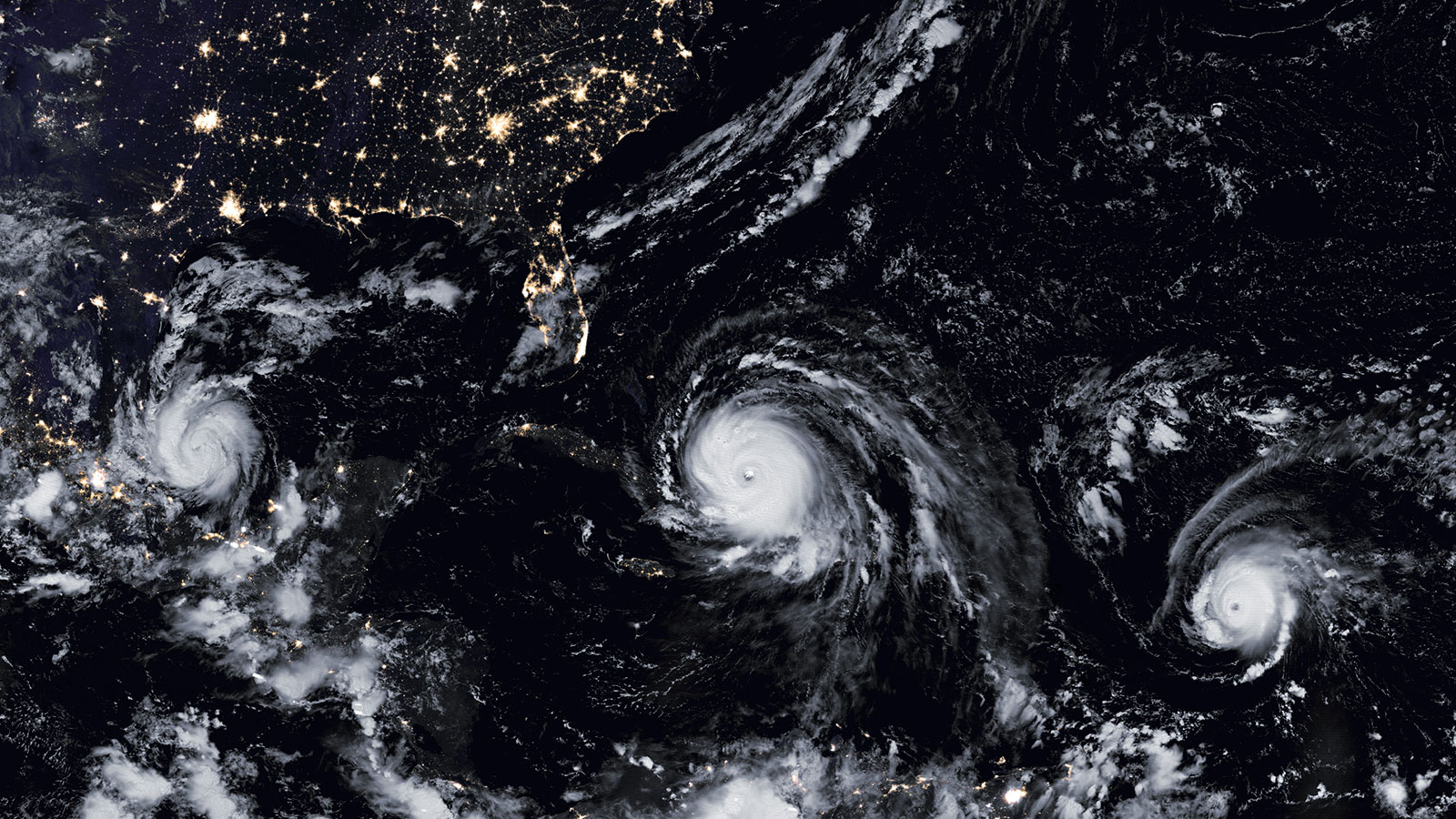 A composite image of nightlights (human-made lights observed from space) and Hurricanes Katia, Irma, and Jose. Del Valle et al. examine the impact of hurricanes on economic losses, as measured by nightlights, and study how mangrove forests can mitigate the effects of hurricanes. Image courtesy of NASA Earth Observatory / Joshua Stevens

Mangroves offer other benefits, too. Like all trees, mangroves remove and store carbon that humans have emitted into the atmosphere. Mangrove ecosystems also protect shorelines from erosion, shelter coral reefs, and filter polluted water that runs from land into the ocean. These dense trees with freakishly long roots are one of the most effective and critical nature-based solutions, along with forests, grasslands, and wetlands.

The irony is that more and more mangroves are being cleared by deforestation for economic gain, as seen in the Amazon, in Central America, and elsewhere. In Indonesia, for example, mangroves are threatened by slash-and-burn agriculture for palm oil production. According to the Nature Conservancy, the rate of mangrove destruction is increasing in many parts of the world, threatening drastic consequences for the climate.

Another irony is that accelerated sea-level rise could destroy mangrove ecosystems, so it’s important for policymakers to think carefully about which areas to conserve.

“Climate change itself is also going to affect how mangroves are located, because given the threat of sea-level rise, it will render some of these conservation spots useless,” said Del Valle, since mangroves will be submerged underwater or battered by stronger storms. “When you’re speaking to a policymaker, you need to point out the right places to conserve and think through what sea-level rise would do.”

As experts quantify the significance of nature conservation in fighting climate impacts, the U.N. has also been engaging with the idea of nature-based solutions. Prior to the U.N. Climate Action Summit in New York City in September, the U.N.’s Nature-based Solutions Coalition invited experts and conservationists to share ideas for how nature-based solutions could scale up to help alleviate the climate crisis. As a result, the U.N. received almost 200 proposals, mostly from small island and developing nations.

For Del Valle, it’s important to weigh the costs and benefits of climate solutions. Although his study only measures the direct economic benefits of mangrove protection, he believes that their total benefits are much greater, since storms could have long-term effects on public health, mortality, and land use. “Nature-based conservation efforts really allow us to almost fully mitigate these losses, providing cost-effective alternatives for places that are poorer,” said Del Valle. “If you want to protect dense places like Miami, you need to build a seawall, but if you want to protect the rest of the world, we need to start looking at other alternatives.”